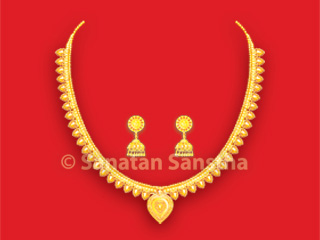 The functioning of the waves associated with spiritual emotion and emotions takes place in the middle of Vishuddha-chakra and Anahat-chakra respectively. For all people to benefit, necklaces that are short and long in length, are available everywhere in larger numbers. Some main types of necklaces are:

Subtle effects on a woman who wears a necklace are:

Proportion of vibrations attracted to the gold necklace:

From this it is evident that it is beneficial for a woman to wear a gold necklace.

Benefits of wearing a necklace:

1.1 Necklace of length upto the Vishuddha-chakra

A necklace associated with Vishuddha-chakra, with a circular design is sattvik; because, sattvik waves of knowledge are attracted to the shape of circular designs. Some examples are – Kanthi, Thushi, Natai, Guluband etc.

1.2 Necklace of length upto the Anahat-chakra

Spiritual experience regarding effects of the sattvik ornament, Mohanmaal: While wearing the Mohanmaal around the neck, I had a vision of Srikrushna. I felt that the Chaitanya of the mala was flowing down from one chakra to another. At the same time, I felt good sensations at my Brahmarandhra. After wearing the mala, my lethargy decreased and there was an increase in my enthusiasm. I felt that devotion and spiritual emotion were being created in me due to the Mohanmala. – Ms. Ranjana Gavas

Lakshmihar: Gold coins with a portrait of Sri Lakshmidevi engraved on them are strung in this necklace. Hence, it is called a ‘Lakshmihar’.

Since the coins in the Lakshmihar contain Sri Lakshmidevi’s portrait, sattvik vibrations and waves of Devi Principle are emitted from the necklace. It is because of this that the lady seeker had a good spiritual experience upon wearing it.

1.3 Necklace of length upto the Manipur-chakra

From this table, importance of a necklace with seven pendants is understood.

Vibrations and their proportion, generated in a string of pearls depending on its length

It is evident from the above table that by wearing a string of pearls of length upto the Vishuddha-chakra one gets the benefit of vibrations of Bliss (Anand) and Peace (Shanti) in a larger proportion. If the length of the string of pearls is upto the Anahat-chakra or upto the Manipur-chakra, then one gets the benefit of the vibrations of Chaitanya in a larger proportion.

When a woman affected by negative energies wears a string of pearls, the black energy of the mantrik in her reduces. That is, spiritual healing takes place on the woman due to the string of pearls.