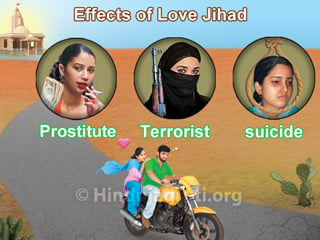 ‘Once a Hindu girl is ensnared in love-dragnet, the Jihadi boy threatens her saying that he will marry her only if she embraces Islam. She is then taken to an Islamic conversion centre. If she refuses to get converted there, she is tortured.’

After marrying a Jihadi, a Hindu girl went to his house and to her dismay realised that he already had two wives. At that time, the Jihadi said to her, “You have been driven out by your parents. You will have to stay here as a servant if you intend staying”.

3. Using the girl for making obscene DVDs or MMS’

‘Since obscene DVDs are in tremendous demand, victims of ‘Love Jihad’ are used for making such DVDs. A Jihadi from Ichalkaranji (Kolhapur District), Maharashtra ensnared a married Hindu woman in the love-dragnet and recorded her nude video on his mobile. He also converted it into MMS and circulated it all over.’ (Daily ‘Sakal’, 1.12.2009).

‘Sometime ago Kerala Police raided the red-light areas of Kochi and Kozhikode and arrested some girls. Most of these girls were either Hindu or Christian hailing from Mangaluru and Bengaluru. They had been forcibly converted.’

5A. Victims of ‘Love Jihad’ are transported through uninhabited regions of Kochi and Kozhikode and taken to Mangaluru, Goa, Chennai or Lakshadweep in boats. They are then assured of jobs in foreign countries and sent to Arab countries, where they are sold to Arabs as prostitutes.’

5B. ‘Some girls from Kerala were also sold in Bangladesh. Some were kept as house maids, others were used for illicit business.’

Girls who desert their parents, brothers, sisters and Hindu Dharma to pursue so-called love and elope with Jihadis, rightly deserve the hellish existence they get in Arab countries as a consequence of their misdeed. Anyone who gives up his Dharma, karma and Nation suffers hellish existence. It is a punishment given by God to such an individual.

6. Use for Jihadi activities

‘According to a CBI report, around 4000 girls who were converted to Islam through ‘Love Jihad’ are being trained by terrorist organisations in Pakistan for Jihadi activities.’ (Weekly ‘Uday India’, 29.10.2011)

6A. Deepa alias Shahina who helped a terrorist

At Aluva in Kerala, Naushad, a school-bus driver attracted a young Christian woman, Deepa Cherian (Age 31), into the love-dragnet. Deepa was named Shahina after marriage as she had embraced Islam. She helped Nazir (A ‘Lashkar-e-Toiba’ terrorist) get a SIM card in Ernakulam jail at her husband’s behest. The Police have arrested Deepa Cherian.’ (rediffmail.com, 20.7.2012)

7. Committing suicide out of a feeling of having been cheated

7B. Pratibha Prabhakaran committed suicide because of forcible conversion !

Pratibha Prabhakaran, a Hindu, eloped with Firoze, a Jihadi, in February 2005. When her parents lodged a Police complaint, both of them presented themselves in the court. Firoze told the court that he really loves Pratibha and will not force her to convert. However, he did not allow Pratibha to contact her family members thereafter. One to two years after marriage, Firoze and his family began to pressurise her to embrace Islam. She was taken to an Islamic  conversion centre at Punnani, but she vehemently refused to convert. Thereafter, a moulvi was called to their house and she was converted to Islam in the house itself. She was forcibly told to wear a burqa and offer Namaz. Frustrated by the entire episode, she finally committed suicide.

8. The fundamental rights of women are trampled upon because of ‘Love Jihad’

The problem of ‘Love Jihad’ is not limited to the subject of conversions. The fundamental rights of women are being trampled upon because of it. The life of a woman that begins as ‘an innocent lover’ ends up in ‘battered and abandoned woman.’ – Dr. Shrirang Godbole, Pune, Maharashtra.