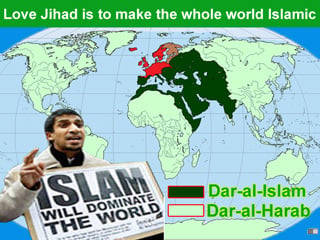 1A. Converting the entire world to Islam

1. Converting Hindu girls to Islam and thereby destroying the source of Hindu lineage.

3. Using Hindu girls for Jihadi activities and arms smuggling after marrying them.

4. ‘Producing’ a number of children after marriage and later using them for suicide-attacks.

Therefore, anyone will be able to realise that the ultimate motive of the aforementioned acts is to convert the entire world to Islam.

2. Extorting money from young women after ensnaring them in love; taking their obscene pictures and blackmailing them using these pictures.

3. Earning money by selling the young women to whorehouses.

4. Earning hefty sums of money by selling the converted Hindu girls in the Gulf and other Islamic countries.

Under the pretext of love, having a physical relationship, and thereby fulfilling sexual desires.

‘The spate of abductions of Hindu women by Jihadis for centuries together was not something that could just to be ridiculed as mere fanaticism; neither was it so insignificant that it could be ignored without a mention. In fact it was not their ‘fanaticism’, but an effective method of increasing their numbers, utilising the unavoidable natural phenomenon (recognising the reproductive capacity of women)’. – Swatantryaveer Savarkar (1963)

Hindu girls are the prime targets of ‘Love Jihad’. They are lured with expensive gifts and are sweet-talked into developing love-relationships.

2. Priority for luring is given to migrant Hindu girls from villages ! : ‘Priority-wise, Jihadis keep an eye on girls who have migrated to the city from villages. Generally, such girls do not have enough money to be able to wear costly dresses or buy gadgets required to match the city lifestyle. Such girls are specifically targeted and given money. They are also lured into addictions like smoking, drinking (alcohol) etc. These girls who are ensnared in this ‘Love Jihad’ and become helpless, soon begin to assist in ensnaring other Hindu girls.’

Nowadays, along with Hindu girls, an attempt is also being made to deceive married Hindu women. Given ahead are two such incidents.

1. Persuading a married Hindu woman with the help of a Fanatic woman who was later abducted by a Jihadi youth : ‘A Hindu couple with a child stayed in Palakkad (Kerala). They had been in love with each other since their college days and eventually got married. After marriage, the woman had to shift to another city along with her child for the sake of her job. In this new place, an aged Fanatic woman neighbour told her stories in praise of Islam and thus taught her to worship according to Islamic customs. One day when her husband went to meet her at the new place, he found her behaving according to Islamic religion. He was shocked to see that she had completely become a Muslim woman. He promptly took her home and kept her there for a month. Everything went on smoothly for some days. She joined her duties again at the same place and fell in love with a Jihadi youth and later eloped with him, abandoning her husband and child.’ – Dr. Mallika and Mrs. Sangeeta Sharma, ‘Manahshakti Samupadeshan Kendra’, Kerala

2. Married Hindu women are targeted, since the money that can be extracted from them is greater than what can be obtained from unmarried Hindu girls : ‘In Ahmednagar District of Maharashtra, a Jihadi youth followed a married Hindu woman for some days. One day he boldly held her hand and tried to make her sit on his motorbike. However, she slapped him on his face and released herself. When she narrated this incident to her family members, they tracked him down. At that time he confessed, “Luring married Hindu women is our new business. We have reduced our attention on young girls from schools or colleges, since once their parents come to know about us, they either stop the girl’s education or get her married. Such girls do satisfy our physical needs, but we do not get any monetary benefits.

On the other hand, if we lure a married Hindu woman then she becomes an ‘ATM’ machine that provides us money 24 hours of the day or she is like a ‘fixed deposit’ for us. We can ask her money anytime. A group of 4-5 of us enjoys such a woman. Later, we ask her to introduce us to her sister, sister-in-law, friends etc. If she resists, we threaten her about showing her obscene pictures to her husband. Since she is interested in keeping her family life secure, she agrees to provide us with whatever we ask”. – A vigilant woman, Mumbai.

‘Young Fanatic girls also pretend to fall in love with young Hindu boys with the sole intention of converting them. They harass the boys to convert after marriage.

3. Inspiration behind ‘Love Jihad’ and the conspiracy

The conspiracy behind ‘Love Jihad’ is fundamentally religious only. The battle of ‘Jihad’ may be of any type, including attacks through writing, speech, love or terrorism. If we do not take into consideration the root of the religious teachings of the Muslims, conversion of Hindus that has been going on for the past 1300 years through the sword, gun, love etc. will never stop.

1. Modus-operandi of Islam : Jihadis do not differentiate as Holy and unholy when it comes to ‘conversion of the kafirs (Infidels; non-believers) to Jihadis and converting entire world to Islam’. This is because Islam considers the result important and not the method adopted to reach the result. Leaving the scene when short of power, living in agreement, meaning, in a cordial manner when the power is equal and use of force when in power (majority), these three stages have been in use for the spread of Islam. In other words, there is nothing new about ‘Love Jihad’; it is in fact very much ‘Jihad’ of religious conversions that has been traditionally going on. Since Jihadis are in a minority in Bharat, they do not have the strength of coming to power; hence, the path of love has been chosen here.’

2. Teachings of fanatic moulvis : ‘Some moulvis impress upon the Jihadi youth that ‘You will attain heaven if you procreate by marrying Hindu girls by luring them. Since this will spread Islam, you will be graced by Allah’. This observation has been recorded by the intelligence officers in Uttar Pradesh.’- Ms. Mamata Tripathi, Columnist.

‘Love Jihad’ is an international conspiracy to convert Hindu girls by countries inimical to Bharat.

1. Arab countries fund ‘Love Jihad’ ! : ‘According to newspapers in Kerala, ‘Love Jihad’ is funded by Arab countries. An organisation under the name of ‘Indian Fraternity Forum’, whose headquarters are in Dammam (Saudi Arabia), collects money for this purpose.’

‘Love Jihad’ receives funds through hawala transactions from Saudi Arabia through ‘Western Union Money Transfer’. Some gold merchants in Bharat have their branches in the Gulf countries. Money is also transferred through them. Besides, money is also transferred through the medium of Haj pilgrims, since the returning pilgrims are not subjected to strict checking at airports.’

2. ‘Love Jihad’ is a proxy war of ‘Lashkar-e-Toiba’ against Bharat ! : ‘Lashkar-e-Toiba (LeT)’, a terrorist organisation based in Pakistan, started its activities in Bharat in 1996 through the medium of ‘Love Jihad’. Jihadi youth are being provided with large sums of money, ultra modern gadgets, facilities and precise planning by LeT.’