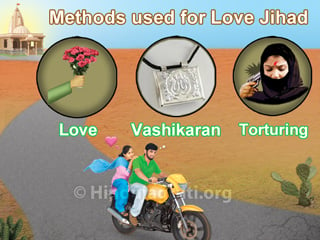 The colonial legacy continued under secularist regimes, as a result of which Hindus are perhaps the world’s only majority community but with minority psychology who need anti-conversion laws for protection from demographic deficit.

The raging debate on love jihad has expectedly created a ruckus both in the media and the wider society. Accusations have been flying from expected quarters—the flag-bearers of disruptive secularism— that it is an “RSS conspiracy to drive a wedge between Hindus and Muslims” on the one hand and “deter intercommunity marriage”. The “RSS-versus-minorities” refrain is part of the secularists’ worn out subterfuge in suppressing serious debate on any sociological and cultural issue.

Ideally, love is one of the most sublime forms of human expression. Two people yielding to this benign emotion must be given moral, legal and social support. Love is exalted to spirituality in Indian tradition. Inter-community marriages are welcomed, if based on mutual consent. There are umpteen examples of public figures with spouses from another community, many of them from BJP. However, when a marriage is based on ulterior motives, premeditated actions or falsehood, it engenders problems violating the couple’s privacy. If an inter-community marriage forces a girl to forsake her religious identity and freedom, it sows suspicion and calls for increased sociological attention. Hindu or Christian girls getting married to Muslim boys had hardly been an issue till cases of abandonment and forced conversion came to light. The issue of “love jihad” first appeared in the British Parliament. The subject index of an “untraceable” file of the National Archives of India unravels that the daughter of Motilal Nehru eloped with a Muslim, Syed Ansari. Both were later traced and separated.

Tara Sahdeo, a shooter in Jharkhand, is a more recent and serious instance. In the Kerala Assembly, Congress CM Oommen Chandy, certainly no votary of Hindutva, admitted in 2012 that 2,667 girls were converted to Islam. Numbers are much higher than reported. Such things may not enjoy wide Muslim support, but forces pushing such marriages are definitely not guided by any secular ethos. Can one dodge the very real issue of whether traditional Islamic society can accept an idol-worshipping woman as part of an Islamic family, culture and society? Hindu women are the biggest victims, whether the marriage is based on affection or design. Conversion is mandatory for any woman marrying a Muslim. Even Mohammad Ali Jinnah, who married Ruttie, a Parsi, in 1920, first converted her to Islam.

Mahatma Gandhi too faced conversion’s sordid symphony when his eldest son Hiralal embraced Islam. He said on May 29, 1936, in Mumbai: “I have the gravest doubt about this acceptance being from the heart or free of selfless considerations. Everyone who knows my son Hiralal knows that he has been for years addicted to the drink evil and has been in the habit of visiting houses of ill fame. For some years, he has been living on the charity of friends who have helped him unstintingly. He is indebted to some Pathans from whom he had borrowed at heavy interest. Up to only recently he was in dread of his life from his Pathan creditors in Bombay. Now he is the hero of the hour in the city.”

Gandhi wrote in the Harijan on June 6, 1936: “Hiralal’s apostasy is no loss to Hinduism and his admission to Islam is a source of weakness to it if, as I apprehend, he remains the same wreck he was before.”

Secularism in India suffers due to three reasons. First, there is no uniform civil code. This renders the gender issue a religious and communal one. Second, organised conversion campaigns increasingly destablises socio-religious equilibrium. Third, the fundamental right of freedom of religion is shattered by unabated conversion. The colonial legacy continued under secularist regimes, as a result of which Hindus are perhaps the world’s only majority community but with minority psychology who need anti-conversion laws for protection from demographic deficit.