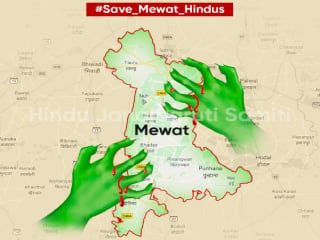 Presently, attempts are going on to convert whole of India into Pakistan; but in some areas, this process is going at fast pace; one such place is ‘Mewat’ in Haryana, near Delhi !  Today, same things are happening with Hindus from Mewat that are happening with Hindus from Bangladesh or Pakistan. Hindu young girls and women are kidnapped, converted and later married forcibly with some Muslim, Hindus are forcibly converted, money is demanded from Hindu traders, their land of temples and crematoriums is taken over, Bangladeshi infiltrators are settled, Hindus are implicated in false cases, Hindus places are robbed etc. Such things are done every day to scare Hindus. Hindus are tortured for small things. Mewat region is only 60 kms from Delhi. After Gudgaon when one takes the road to Alwar, Mewat region starts after Sohna village. Mewat is spread in Haryana, Rajasthan and Uttar Pradesh. Mewat was earlier a part of Gudgaon. On May 4, 2004, Mewat was given the status of a District as also main office of Nuhala District. Mewat’s area is 1784 kilometers. There are six talukas in Mewat which are Punhana, Phirozpur, Zitka, Nagina, Nuh Tavadu and Hathin. Mewat is a region with Muslims as majority. There is dominance of Mewa Muslims in this region. Mewa first belonged to Hindus. There are still few Mewa Hindus. In 14th century, during the regime of Tughlaq’s descendents, people of Mewat were forcibly converted to Islam. Even then, these people had preserved their identity for many years; but after 1920, mainly after Shariat Act of 1927, fanatic organizations started changing these people in their colour and its adverse effect was that the local Muslims started demanding Pakistan; but when Pakistan was formed, very few Muslims went to Pakistan from here.

The delegation led by VHP central Joint General Secretary Dr Surendra Jain on Friday met CM Manohar Lal Khattar to apprise him about the report of the High Level Inquiry Committee and its conclusions and recommendations in connection to the anti-national and anti-Hindu activities.

A 3-member Committee included a former Army officer Maj. Gen.(Retd) G.D. Bakshi, Advocate Chandra kant Sharma and a religious leader Mahamandaleshwar Dharmadev ji was formed to look into the atrocities being perpetrated on the Hindu society in Mewat (Haryana). A 3-member inquiry committee of the Vishwa Hindu Parishad has demanded replacing the entire police apparatus in some areas of Haryana’s Mewat, bringing paramilitary forces if required and making the Station House Officers (SHOs) accountable.

103 villages have become completely devoid of Hindus and there are over 82 villages where only less than 5 families of Hindus are left.

It is a very serious matter that there is so much terror and fear of Fanatics in this district of Haryana. There is so much pressure and oppression on Hindu families that the Hindu community is migrating. It is becoming difficult for Hindu women to get out of their houses and Hindu youths to go for agricultural activities and other works to earn their living. The Hindu society here is helplessly looking that anti-national and anti-Hindu acts are being done openly under the patronage
of the police administration. The police department is also under so much pressure from Fanatics that under pressure, they have also filed cases against several senior journalists and the latter are being prevented from performing their duties.

Former Justice Pawan Kumar, who headed an investigation team to probe the atrocities inflicted on Hindus and Dalits in Haryana’s Mewat today said that there is no difference between Pakistan and Mewat, as per the press release shared by VHP National spokesperson Vinod Bansal.

Justice Pawan Kumar remarked that Mewat of Haryana is becoming a graveyard of Dalits and there are many reports of women being abducted, raped and forcibly converted in the region.

Citing no action taken against the complaints filed by Dalits, Shri Valmiki Mahasabha of Haryana had decided to constitute a 4-member committee led by Justice Pawan Kumar to bring the reality of the atrocities committed against the Dalits to the fore. The findings of the team revealed that,

The committee concluded that the atrocities against Dalits can happen only in connivance with the administration and local police. Complaints of Dalit victims are not lodged. If somehow they persist with the complaint and file FIRs against the perpetrators, police pressurises the victims, compels them to strike a compromise with the assailants and threatens them of false cases.

Chairman of the committee, former justice Pawan Kumar said that the report will be sent to the chief minister of Haryana, to the chairman of scheduled castes commission of India and the Home Minister of India so that justice is delivered and rule of law can once again be established in Mewat.

Save Mewat from becoming Pakistan ! (Report published in November 2012)

Shri. Arunkumar Singh has described, in this article, the manner in which ‘Mewat’ is being converted into Pakistan based on the report published in November 2012. Since then, instead of changing the situation it has become more worst.

Under the circumstances, the Haryana Government should be alert and vigilant about the security of the minority Hindu community in Mewat region and a proper mechanism for their security should be put in place, so that a trust can be generated in them !