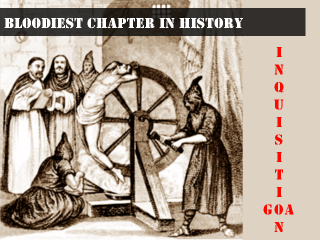 Goa has witnessed one of the most brutal genocides in the history of mankind – the Inquisition of Goa. While the world knows about the Spanish Inquisition, hardly anything is known about the Goan Inquisition. After 451 long years of tyrannical rule by the barbaric Portuguese, they were overthrown and Goa was liberated on December 19, 1961, which became honoured as Goa Liberation Day. The Goa inquisition is regarded by all contemporary portrayals as the most violent inquisition ever executed by the Portuguese Catholic Church. It was marked by an unparalleled barbarism, inhumanism and fanaticism, the most horrifying and bloodiest inquisition faced by Goan Hindus who suffered for 252 years (1560 to 1812). Those Hindus who refused to convert to Christianity or those found ‘guilty’ of secretly practising Hindu Dharma despite converting were punished in the cruellest manner possible. It is heartbreaking that this Inquisition has no place in Indian history books, nor is it openly discussed.

Request you to please send the email with the demands to Hon’ble Chief Minister & concerned authorities by clicking on the below button. Request you to send a copy of the email to [email protected]

The tale needs to be told!

Would also be good if every temple (even the ones that are functional today) can have a wall that tells the history,illustrated may be, of how it came to stand where it now does.#GoaInquisition #Konkani https://t.co/Q7zWsv9u3E

The Goa Inquisition was a terrible tribunal of torture. People were hauled to torture chambers for ‘offences’ as trivial as distributing betel leaves, cooking rice without salt, wearing saris, wearing flowers in the hair, having a Tulsi plant in their home! https://t.co/lD2Wdzu2MR