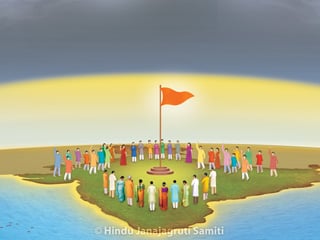 Having spent most of my life abroad, and viewing and analyzing India from a distance, I was confronted with the good, the bad and ugliness of Indian politics.

DECLARE INDIA AS A HINDU RASHTRA

From Kashmir to Kerala, the government is mismanaging the economy, public funds are diverted to Muslims and Christians, and coercive religious conversion is encouraged and supported. Instead of moving the country forward, the central government controlled by the uneducated Italian catholic lady Antonio Maino and many state governments (Except Gujarat) work against the interests of the majority Hindus.This is the only one cure for the plague of cynicism, Islamic terrorism, and appeasement of Muslims, internal disturbances created by subversive agents, anti Indian attitude of the media, political corruption, lack of economic progress, and crises created by regional- criminal politicians, and inefficiency and corruption in the bureaucracy. Our enemies have injected so many thought viruses in Indian political life.  The only cure for the illness and the only way out of the mess is to declare India as a Hindu Rashtra.

The Media, instead of unmasking the hypocrisy of corrupt, criminal politicians, subversive organizations, individuals who act as subversive agents who create and deepen the crises in India, endorse and support the patrician politics that divide the nation.  For years, our media contributed to the climate of corruption, subversive activities polarizing the nation, and helped to spread the contentious and dangerous messages of Muslims and anti national groups.

The Media supports “politics of destruction”. The print and TV media also invite and promote corrupt, criminal politicians, subversive groups and anti national, anti Hindu groups on the news and talk show programs for the simple reason that it brings applause from our enemies.

Naming India as a Hindu Rashtra will explode the conventional wisdom. IT will provide a strong Identity for all Hindus. Hindus from Kashmir to Kerala have a role to play. If large enough members of Hindu community demand a Hindu Rashtra, India’s criminal and corrupt politicians have to heed to their demands. The Hindus have to challenge criminal, anti India, anti Hindu politicians to do better and make them do better for Hindus and the Hindu Rashtra.

To be honest, the crises Hindus face is now so deep and transformation required is so fundamental that real change can sometime feel almost impossible. How do we keep Hindus move with the slogan “HINDU RASHTRA” into a reality? We need to force Hindus into real freedom.  Only free people can move away from cynicism into optimism.

When Theodor Herzl in late 1895 coined the term  Der Jeden Staat (Jewish State), he was ridiculed, insulted, and called him a delusional misfit. Instead of all negative publicity, Theodor Herzl was successful in creating a Zionist movement which resulted in the birth of a Jewish state in 1948. Herzl’s slogans provided the settings at which Jewish politicians could work hard to establish Israel, and the only Jewish state in the world. Now Jews around the world supports the Jewish state. Zionism support Jews upholding their Jewish identity and opposes Jewish discrimination, exclusion, and persecution around the world.

Jewish people have been forced to wander around the world for more than 2000 years. Without any Jewish state, Muslims and Christians, through a combination of anti Jewish attitudes and measures have been discriminating, and even killing Jewish people. Now, a total of 15 million Jewish people exist in the world. But they are a powerful force to be reckoned with. With 1.5 billion Islamic people with 71 Islamic nations could not wipe out tiny democratic, progressive peace loving and pluralist Israel. Israel is committed to Cultural identity, commitment for pluralistic values, and respect for freedom and positive outlook, economic progress and democracy.

Our own hope has been dramatically renewed by recent conference organized by Hindu Janajagruti Samiti at Goa. It seems Hindus are slowly waking up from the slumber by the miraculous work by Tapan Ghosh and Radheshyam Brahmachari in West Bengal, Hindu Aykavedi in Kerala, and Hindu Munnani in Tamilnadu and Hindu organizations in different parts of India is working for a Hindu Rashtra.  More important, these Hindu movements offer a campaign plan.

Intellectuals and prominent professional luminaries from different parts of the world have written and expatiated the abstract concept, the functional concept, strategies and action plan for a Hindu RASHTRA. Tapan Ghosh and Brahmachari (Calcutta), Dr. Bala Aiyer (Houston) Bhagavat Goel (New Delhi) V. Sundaram (Chennai), Deivamuthu (Mumbai) Narayan Kataria and Arish Sahani (New York) Dr. Subramanian Swami (New Delhi) Swami Jyothi (Bangalore) Dr. Togadia (New Delhi) Sarvarkar Vinayak (London) have written and advocated all Hindus to build around  a set of creative ideas, to get Hindus moving. Hindus can now say that Hindu Rashtra is not a slogan but a concrete reality. Whenever we feel stuck, paralyzed, intimidated, or overwhelmed, whenever we feel helpless and hopeless, we need to understand, that our situation is never as static as it may appear to be.  Hope always involves that breaking open of new possibilities from seemingly hopeless circumstances. We know too well the death and mayhem resulting from nefarious activities of the bogus secular, criminal, corrupt anti national, anti Hindu politicians. We know the destruction caused by atheist, phony secularists who relentlessly work against Hindus and for appeasing Muslims and our enemies. We have to include in our activities and in our deliberations ways to overcome the destruction caused by the anti national political parties. We need to plant seeds of change in every Hindu who are indoctrinated and brainwashed to act like zombies for our enemies.

Unlike Islam, Marxism, and Christianity Hindu Dharma is not a closed dogma and we do not have any sect or way of worship or one Messiah, or one prophet. Hindus have different Panthas or ways of worship. We respect and approve the Vedic system, Buddhist system, Jainism, Sikhism, Vaishnava, Shaiva, Shakta, Ligayat, Arya Samaj, Brahma Samaj and these special ways reach the truth. Hindus respect and approve Bhakti Marga, Jnana Marga, and Karma Marga. According to one’s intellectual and physical inclination, capacity and nature our Vedic system offers freedom to act and think to reach slavation.  According to Dr. Radhakrishnan Hinduism is not a closed dogma or sect but it is a great commonwealth who believe in Dharma and truth who seek Vasudeva Kudambakham.

The concept of Rashtra is nothing new. It can be found in Rig Veda. From ancient days to modern times, Hindu Rashtra was in existence. Eminent personalities have again and again insisted that Bharat Bhumi is punyaBhumi and now the time has come that Hindus around the world must join together and declare Bharat as a HINDU RASHTRA.

Hindu Rashtra may polarize anti national, anti Hindu people. Social issues may be created by our enemies. It is likely that these issues will come before Hindus. These issues only add fuel to an already explosive climate created by our distracters.  Hindus must face it, confront it and resolve social issues that may be created by ant Hindu forces. Hindus have to work together for a change. Hindus have too many enemies who want to destroy us from within and without. Hindus should not be reluctant to take the first step to declare Bharat as a Hindu Rashtra. Does anyone believe that it is not a good thing?