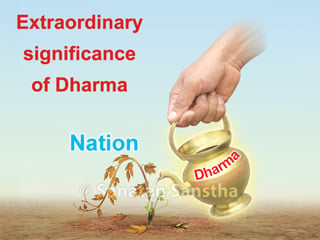 Social life involves people, and the way people follow Dharma determines how righteous a nations is. It is very rare to point one nation nowadays which completely follows Dharma. If a nation has one good characteristic, it will lack somewhere else. How does a righteous nation have to be? What steps can be taken to make our nation follow Dharma? Let us read this article and get a simple understanding about the significance of Dharma and a nation that follows Dharma.

1. Origin and definition of ‘Dharma’

The word dharma (धर्म) has been derived from the root ‘dhru (धृ)’. ‘धृ धारयति’ means to bear, to support. ‘धरति लोकान् ध्रियते पुण्यात्मभिः इति वा’ means Dharma is that which sustains the people or that which is supported by evolved souls. Evolved souls support Dharma implies that Dharma has the sole support of evolved souls and saints. Shri Shankaracharya defines Dharma in an expansive way thus – Dharma is that which accomplishes the three tasks of bringing about the worldly and spiritual progress of every living being as well as keeping the social system in an excellent condition. Dharma is synonymous with Sanatan (Eternal) religion, Vedic religion, Arya religion, Hindu religion, Divine religion, Universal religion, human religion, etc.

2. Non-duality between Righteousness and God

Sweetness is the quality of sugar. That which possesses the quality of sweetness is sugar. The relationship between God and Dharma is akin to that between sugar and its sweetness which are inseparable. God is the righteous one and His quality itself is called Dharma. Since God’s code of Dharma cannot be varied ultimately there is only one code of Dharma which is to bring about worldly and spiritual progress of all living beings and support the society. Even though one may refer to Dharma by different names, their teachings are certainly one and the same. Hence no religion can be different from the other. All religions are one and the same. Though there are differences in following a religion as per the principle; yet the principle is one and the same.

A. The four pursuits of human life are Dharma, artha (acquisition of wealth by honest means), kama (desire for physical and mental happiness) and liberation of the embodied soul from the vast ocean of materialistic life, that is, Moksha (attainment of the Final Liberation). By following Dharma one acquires wealth, fulfillment of desires and attains Moksha. Dharma is not only useful in this world but also in the other subtle worlds too.

A. Ideals placed by spiritualists before the society

The concepts of the other subtle regions, renouncing worldly life, becoming detached from society, meditation in seclusion, unconcerned about the material world, etc. are generally associated with Spirituality. Hence, several revolutionaries and social reformers consider Spirituality as an attitude contrary to progress and as a type of escapism. Nevertheless, it would be improper to consider Spirituality as basically antisocial, as time and again spiritualists have placed high ideals before society and appealed to the society to strive towards that ideal. Some such examples are Swami Vivekanand and Yogi Aurobindo.

B. Balanced social structure is possible only by adopting the principle of pure Hinduism

As Hinduism means undertaking spiritual practice, pure Hinduism is the very foundation of our nationalism. People who think only about their own selfish interests are termed as sinners and thieves in Spirituality. Vedic doctrines state that God exists among all living beings. Could there be a better balanced social structure than this? This itself is the social system based on principles of Hinduism which our ancestors have referred to as the principle of socialism.

5. Existence of a nation depends on following Dharma

A society comprises of people with varying qualities, defects and temperaments. Several social groups are formed on the basis of language, culture, region, lineage, etc. The collective union of all these social groups is referred to as a nation. A nation is a living, collective psychological unity whose eternity depends on its moral and spiritual base.

Only a nation which has blended totally with Dharma becomes wealthy and eternal. This is the significance of Dharma. A nation is the very soul of society. If the society becomes devoid of the soul then it will certainly be doomed. Hence social life is entwined in the longevity of the nation. We can refer to the nation as divine because it is a true creation which is eternal. Dharma is the very life of such a nation and it attains eternity only if social life is based on Dharma. All the countries in the world which are effulgent follow Dharma. However, sorrow is mounting there because simultaneously they are becoming as materialistic as they are righteous. Though the life of these nations is Dharma, since it is not divine it is not pure. It cannot therefore be called Dharma because eventually the basic characteristic of Dharma is to impart the spiritual experience of Self-realization. Such a non-divine nation is destroyed over the passage of time. When the entire human race follows Dharma, there will be only one nation on the face of the earth, as in the Satyayug (The first in the cycle of four Eras since the origin of the universe). Then there is non-duality between the nation and Dharma and only such a nation becomes eternal. ‘On realizing that a nation’s happiness is a result of observance of Dharma, the nation wherein those following Spirituality can live without obstacles becomes righteous and consequently becomes prosperous. Thus it never faces a crisis. Such a nation never perishes and this itself is the secret of universal peace, is what our Aryan culture preaches.