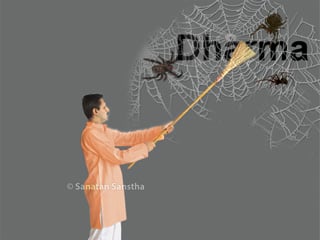 Since time immemorial, Hinduism has been the all-pervading religion across the universe, but most of the Hindus nowadays are not aware of even the basic rituals as prescribed by sages long ago. In fact even the calculation of time and following the calendar has gone the English way. What could be the reasons behind this sudden religious ignorance and loss of respect for one’s own religion and philosophies? This article describes the various facts about where we could have gone wrong.

1. Religious Ignorance in Hindus about their own Dharma

As our rulers do not follow Dharma, incorporation of the topic of Dharma is not done at any level in the educational curriculum. Christian brethren have some knowledge about the Bible, so do Muslims about the Kuran. The Hindus however are totally deprived of any education about their religion. A majority of Hindus have not even read their holy text the Gita, let alone know about its teachings. Thus putting those teachings into practice is impossible for them. Hindus do not receive guidance even from their religious leaders. Apart from a little knowledge about karmakand (the stage of ritualistic worship), a majority of Hindus are totally ignorant about the vast philosophy of the Hindu religion. Besides performing puja (ritualistic worship) and visiting temples, a majority of the Hindus do not have any knowledge about their religion. The science of Spirituality in the Hindu religion is a gift to mankind but Hindus do not even know the meaning of the word ‘Spirituality’. The managing committees of the temples too are ignorant about Dharma and religious duties. A member of a temple committee in Maharashtra was asked, “Do you do anything to teach about Hindu religion in Hindu temples?” He then began to describe how certain temples were decorated, how many temple domes were made of gold, etc. He was not even aware that temples should do something about Dharma.

Followers of no other religion harbour misconceptions about Spirituality to such an extent as Hindus.

Some people offer alms to a person in the garb of a mendicant with the fear that if he is hurt, then he may curse oneself.

We come across several examples of blind faith being published through newspapers. Even today a large number of people in this country consider a cat crossing one’s path to be a bad omen. Does this mean that cats should never be seen on the road? In reality these are not superstitions but are premonitions. Should these occur one should repeat (chant) The Lord’s Name.

98% of the so-called ‘holy men’ are fake. They make money in the garb of a mendicant. Due to such fake holy men, true saints are defamed without any reason. Some people undertake spiritual practice as advised by such fake holy men or those who do not have any authority and thus waste several years of their life doing inappropriate spiritual practice.

D. Over smartness of so-called rationalists

Many people feel, ‘of what use is Spirituality to us’? They are unaware that physical, psychological, financial and various other problems faced by 80% of people can be eliminated by undertaking spiritual practice alone.

Utsav (A religious festival) is a ritual which is celebrated collectively. Malpractices have become rampant during public celebration of religious festivals such as Gaṇesh Chaturthi (Birth of Shri Gaṇesh according to the Hindu lunar almanac on Bhadrapad Shukla Chaturthi, that is, the fourth day of the bright fortnight of Bhadrapad), Navaratri (The period of nine continuous days and nights, particularly the period between Pratipada (First day) and Navami (Ninth day) of the bright half of the month of Chaitra and Ashwin, devoted to worship of Shri Durgadevi), Holi, etc. wherein extortion is resorted to, idols of deities in odd shapes and attire not in accordance with the scriptures are used, programmes organized are not in the interest of the Nation and Dharma. Instead movies and orchestras not in keeping with our sanskruti (culture) are organized and people even consume alcohol at the venue of the programmes. Gambling is carried on within the temple premises during jatras (annual festivals of deities). Noise pollution and extravagant expenditure on decoration under the pretext of celebrating religious festivals are also a cause for worry. All these malpractices not only mar the sanctity of the festival but also prove detrimental to national and social interests.

Nowadays, we notice how names and pictures of deities are being used by people for manufacturing and advertising their products, e.g. wrappings of firecrackers have pictures of deities on them. When these are lit, the pictures of the deities are blown up into bits and pieces and get stamped by passers-by. In some places, religious festivals are publicly celebrated with the sponsorship of cigarette and ghutka dealers or manufacturers. Naturally they try to promote their product and influence the organizers to hold programmes of their choice during the festival. Inadvertently such advertisements enhance the spread of addictive substances in the society. In the same way, deities are projected in a ridiculous manner for commercial purposes. Use of deities and religion to fulfill selfish motives is totally inappropriate and amounts to denigration of our deities, religion and sanskruti.

The growing hatred between religions, sects and castes is induced by sectarian people and politicians. This has the following three facets.

A. Animosity towards other religious orders

All religious orders and sects are created by God. As some sectarian followers do not believe in this, they harbour hatred towards followers of other sects.

B. Preaching about one’s own sect

C. Attempts to convert people to one’s own sect / religion

Sectarian people who preach to convert people of other religious orders to their own, harbour a feeling of separateness. Hence they consider their religious order to be superior to those of others. Saints and seekers who believe that God is one, do not ask others to change their religions. They are aware of the religious doctrine that an individual is born in that religious order, the spiritual practice of which is most conducive for his spiritual progress, according to God’s wish.