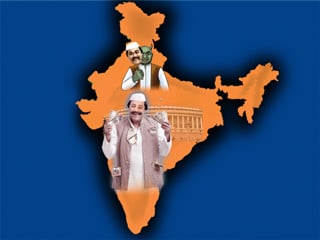 The current state of India superficially looks very encouraging. Most leaders would try to show colourful pictures of how their states are flourishing under their governance, but when we literally try to compare current state of India with the previous government, nothing has actually changed. The changes we hear are only in their speeches or on news channels. The common man is still facing the same problems. Even basic necessities like water and electricity are not available in many places. Let us find out why exactly our nation has gone through such degradation.

1. Not a nation but merely a social group

In the ancient times, the concept of a nation did not exist. Then clans, tribes, castes and communities had their independent existence. These constituents would not survive once their artificial or political external covering would get destroyed. As against this, a nation is imperishable; because a nation is a veritable result of human evolution. A nation is not merely an economic, political or administrative unit but is a lively, collective psychological unit. A nation has an inner life of its own. The principle of unity remains alive in the nation. This principle has a moral and spiritual base. A nation’s administration operates by exercising its authority on its constituent elements and in accordance with political convenience. If all the citizens of a nation are bound together by an internal unity, then such a nation never disintegrates or perishes. If one contemplates about India on the basis of this definition of a nation, does India deserve to be considered a nation? The failure of powerful Hindu rulers to retaliate against invasions by Muslims in the ancient times, the heightened feeling of animosity among Hindu brethren, a handful of Englishmen being able to rule a massive Hindu empire, etc. all point towards the lack of internal unity among the Hindus. When such an administration which has not united into a Nation disintegrates, one cannot find any inner tendency in the society which can assist in rebuilding the external unity of the Nation thus leading to disintegration of the nation, e.g. partitioning of India, Pakistan and Bangladesh. Contrary to this, if a Nation whose people are bound by an inner unity, disintegrates due to any circumstances, an inner tendency to reunite is present therein, e.g. reunification of Germany. Our country is on the verge of further disintegration akin to how a single empire got partitioned into India, Pakistan and Bangladesh. Demand for an independent state of Kashmir is being made since several years. The separatist attitude of small North-eastern states like Assam and Manipur of separating from India, is gaining momentum since the last few years. Recently, independent states of Chattisgarh, Jharkhand and Uttaranchal have been created from Madhya Pradesh, Bihar and Uttar Pradesh respectively. Demand for an independent state of Vidharbha is also gaining momentum in Maharashtra. This is a result of lack of feeling of unity among the countrymen, an attitude of not making efforts towards achieving unity and external invasions which disrupt the social fabric of life. If the current state of India continues in this fashion, then the day is not far off when it will cease to exist altogether.

2. Western and Indian philosophy about progress

Westerners always equate progress with material progress. The definition of progress as per sanskruti (Indian culture) is far superior to that of Westerners. Indian culture mentions three inspirations namely sattva (One of the three components in the universe, signified by purity and knowledge), raja (One of the three basic components in the universe, signified by activity, passion) and tama (One of the three components in the universe, signified by inertia and ignorance) which inspire mankind. Raja–tama inspirations strive for material prosperity while the Sattva inspiration strives to attain internal satisfaction. Indian culture certainly expected as much prosperity as is necessary to fulfill all one’s needs so as to obtain happiness but not so much as will prove an obstacle in attaining internal satisfaction. This culture accorded all the three inspirations their due position while considering the sattva inspiration as the predominant one. Unfortunately, over the period of time as the attitude of the Indians to blindly emulate Westerners gained a firm hold, Indians forgot this principle of attaining happiness put forth by Indian culture. Today, though Indians have made modern progress in fields such as science, technology on par with developed nations and have proved their intellectual prowess the world over; yet they have deviated from the sattva inspiration endowing inner satisfaction. Materialism refers to grossness. When man gets entrapped in materialism, the aim of attaining eternal happiness and satisfaction remains far from being attained. Consequently, the present lifestyle of Indians is filled with dissatisfaction, lack of peace, immorality and selfishness.

3. Problems faced by the nation due to a raja–tama predominant lifestyle

3 A. Anxious and insecure day-to-day life of Indians

One need not delve deep to understand how the entire social system is eroded by corruption. Even a study of the day-to-day happenings around us is sufficient. The first encounter with corruption when we get up in the morning is in the form of the milkman who brings adulterated milk. When we glance through the morning newspaper we get to read about massacres in Kashmir, clashes, riots at various places, rapes, etc. Hence, instead of a good morning our day begins with a bad morning. When we set out for office it is difficult to walk on the roads as the hawkers have encroached on the road and slum dwellers have occupied the pavements. If one sets out by bus then the conductor has no change! If one travels by rickshaw or taxi either the fare is not charged as per the meter reading or the meter displays higher fare. If we use our own vehicle, then we have to make do with adulterated petrol. If we visit any office then we find that everyone is corrupt right from the watchman to the I.A.S. officer, from the constable to the Director General of Police or from the ward boy to the chief medical officer. Corruption has now infiltrated all spheres including finance, judiciary, education, sports, etc. One now realizes why India has a high rating amongst the world’s most corrupt countries and why it is said that 60% of Indians are corrupt. In the evening when one goes to buy vegetables or food grains, one encounters shopkeepers who cheat on weights and measures or sell poor quality goods at a higher price. If one needs to repair one’s television set, fridge, scooter, etc. one gets cheated by the mechanic. One does not get sound sleep at night due to blaring music being played at a wedding at a neighbour’s place or due to dogs barking in the neighbourhood. As one has to face such unpleasant events throughout the day, most people lead a life of distress and strife. If we take into account Jammu-Kashmir and the North-eastern states, a gory picture of a populace terror-stricken with the inhuman acts of terrorism meets our eyes. The social scenario in Jammu-Kashmir has deteriorated to such an extent in the last ten years that it is impossible to carry out even the day-to-day activities. Here, setting out of the house at night is like inviting one’s own death. Even if someone is critically ill, he cannot be shifted to the hospital. As curfew is imposed at any odd hour, there is no guarantee that a person who has set out of the house will return home on time or whether he will reach home safely at all. Everyone goes through their daily routine under tremendous tension as at any time they may fall prey to gunfire, bomb blasts or be murdered. To add to it, the Indian government had declared a unilateral ceasefire against the terrorists with the aim of restoring peace in Kashmir. On account of this, the morale of the police, the Border Security Force and the army weakened while that of the terrorists received a boost. The terrorists’ belief that ‘We will conquer Kashmir’ has turned into a firm conviction. Prior to the formation of Israel, whenever Jews used to meet they would greet one another saying, “Let us meet in Israel next year”. Likewise terrorists now say, “See you in Kashmir next month!” All this has made the local populace to totally lose its trust in its government. The people carry on their lives helplessly saying, “We have met with this fate because we are Indians.” In short, the common man in the country has totally lost faith in political parties, people and worldly transactions. They are unable to find an alternative. The average man has become devoid of radiance and confused and is helplessly tolerating all the injustice inflicted upon him.

3 B. Tendency to form ‘unions’ for selfish ends

The various components of society are bound by unions or associations. A union thinks of only a small section of society and not of the entire society. Unions fight only for their rights but do not teach the workers to carry out their duties. The hooliganism of various workers’ unions is widely known. The present financial state of the nation is so bad that salaries of employees should actually be reduced. But in reality, the unions continually demand for a raise in the salary. In order to get their demand for a salary raise or some other similar ones fulfilled, the unions wield the weapon of strikes to hold the public and the nation at ransom. Those who give a call for strike which is against national interest in all aspects as well as those who lend their support to it, are all traitors in a way. Union workers who come together only for selfish interests also lack foresight, e.g. 20 years ago when the Government thought of computerising the banks, workers’ unions strongly opposed the move claiming that it would result in increasing unemployment. Consequently, India lagged behind on the international level. If one does not curb in time, this attitude of the workers of forming a union in order to extract maximum benefit, the future of the nation will become even bleaker.

Our countrymen have experienced their nexus on several occasions. Hence the public is confused as to who are the protectors of law and its saviour.