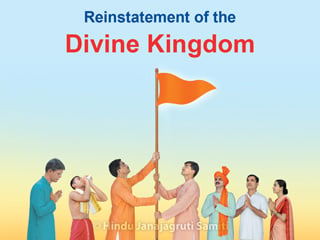 We must be wondering what is a divine kingdom and what does it look like? We can establish a Divine kingdom even amidst the current tensions across the world, simply by following and abiding by Dharma (Righteousness), as this leads to increased sattvikta (Purity) within ourselves and in the environment. People nowadays have lost morality and increased selfishness thus putting themselves in this troubled state the world is currently facing. Let us get to know what we can do to establish a Divine Kingdom as soon as possible.

1. Indian definition of progress which is far superior to that of Westerners

The Western concept of progress is to try to find materialistic means to achieve greater happiness. That is why only intellectual, political, social and economic spheres are the fields of their progress. The greatness of such nations is judged from their economic or military might. Contrary to this, our worldly and scientific progress will be based on spiritual tenets. We want worldly happiness but just as much as to fulfill our personal needs. However, attainment of eternal Bliss, that is God realization will be the ultimate aim of our lives.

2. Evolution of the individual and society – the aim of restructuring the nation

The true medium of progress is always the individual. It is the individual who obstructs the progress of the entire society. Progress, growth, realization of the expansiveness of life all endow man with supreme happiness. Peace and health are both dear to society. So long as a nation is not acquainted with its soul and social life simply means material and economic unity, till then there is always a conflict between the individual and the society. Self-reliance on one hand and expansiveness on the other are the two seemingly mutually opposing aspects of the fulfillment of individual life. That is precisely why man revolts against social circumstances which encroach on his individual freedom and progress. Just as he does not accept the control of one social class on another, so also he does not accept the control of society over him. The individual can bring about his development by using his body, mind and intellect to lead a life which fulfills his mission, duties, knowledge, vivek (Ability to discriminate between right and wrong) and faith. Similarly, the society can use its social, economic and political systems to achieve progress in the fields of philosophy, education, planning, law, international relations, arts, knowledge, literature, Dharma, niti (Morality) and organisation in an appropriate manner, to foster a pleasant environment conducive for a progressive life through the development of a culture and tradition.

3. Who are the reinstators of the Divine kingdom?

A. Restructuring the nation is not the task of politicians!

B. Importance of undertaking spiritual practice

A seeker will require an expansive and analytical intellect to comprehend the situation in the mission of reinstatement of the nation. The sattvik (sattva predominant) intellect is of this very nature. Along with this, to realize future events in the world, one will require a seer who can foresee the future. Seekers who can foresee the future to some extent by crossing the barrier of time are themselves seers.

C. The God assists only a seeker in reinstatement of the Divine kingdom

The God does not incarnate when the nation is in a crisis or comes under a foreign rule. He incarnates only when His devotees are harassed by evildoers. That is precisely why we Indians should become His devotees. Only then will we be able to fulfill our dream of reinstating the Divine kingdom with the blessings of The God.

D. Some special features of Pitrushahi (One willing to make any sacrifice for the happiness of his subjects)

4. Path to the reinstatement of the Divine Kingdom

A. Reinstatement of the Divine Kingdom should not be based on emotion but on science of Spirituality

The restructuring of the Nation should be as perfect as the science of Spirituality. Only then will it last for at least a few centuries. The restructuring done on an emotional level gets destroyed in a few years as in communist Russia.

B. Not kranti (revolution) but utkranti (evolution) is desired

The problems faced by our Nation are so difficult and deep-rooted that many feel ‘there is no alternative to a revolution’. India’s history and tradition however testify that our life is more suitable for evolution rather than revolution. There is a fundamental difference between revolution and evolution, life and rejuvenation. Revolution comes with the fury of a cyclone and in its tempo destroys everything in it way – old values, customs, concepts and organizations. It wreaks more devastation rather than creation and thus proves very costly. As against this evolution and rejuvenation are based on life. They do not cause devastation of life or property, rather uplift them. One can bring about evolution only through the practice of Spirituality. It is therefore essential that we preach about Dharma in society.

C. We require co-ordination not compromise or opportunism

Coordination is a very superior intellectual process. In this process, one has to intellectually search for the latent common principle in varied and even contrasting spheres of life. This has to begin with developing co-ordination among different Hindu sects. If egoistic politicians can compromise and form an alliance/front then why cannot seekers from different sects who have less ego be united? This collective strength of seekers alone will facilitate the task of reinstating the Divine kingdom.

D.  Uniting Hindus under the banner of social and national well being

Only Muslims have the capability to unite under the banner of religion, not Hindus. To unite Hindus an emotional base is required. Social and national problems prove useful in this context. Hindus who come together for this cause will later unite for the purpose of Dharma as well.

E. How should the Constitution of a nation be?

We do not want a Constitution written on the inappropriate lines of Western constitutions which are devoid of moral values and have only law and not God as the focus of the social system. The Constitution should be written taking into consideration the main objective of a Constitution of propagating Dharma among the subjects so as to make the attitude of the entire society sattva predominant.

5. Various aspects of the Divine kingdom

‘धर्मेण अर्थः’ means acquiring wealth by righteous means and not by corruption.

Education to realize God. Universities of Spirituality will have to be established at various places for this purpose.

80% of man’s physical, psychological, financial and other problems occur due to spiritual reasons. They can be overcome or alleviated by undertaking spiritual practice. Hence stress will be laid on the practice of Spirituality.

Judges will be seers in the Divine kingdom. Hence present day issues such as being deceived by lawyers, hearings getting delayed for years together, getting cross-examined, appeals being made in higher courts, etc. will not occur in the Divine kingdom. Whether the accused is present or not, the judges will know the truth and give an instant verdict.

Fostering of art will not be merely for its sake rather it will be practiced to realize God. This shall be the basic principle behind learning art.

6. Concern for the entire human race

Every Nation’s state today is more or less like that of India. As compared to the wealthy United States or Japan, there is immorality, unrighteousness and unconcern for others everywhere in the poor countries of Africa and Bangladesh. Due to these three reasons, materialism, corruption and hooliganism are rampant there. We will have to preach about niti and Dharma the world over in order to protect India. The effect of preaching in India alone will not be long lasting as the materialistic thoughts of other countries shall constantly impinge on India. Hence, Sanatan Sanstha and Hindu Janajagruti Samiti has undertaken the mission of upliftment of the entire human race. An example of this is that Sanatan Sanstha and Hindu Janajagruti Samiti has already started propagation of Spirituality abroad as well.