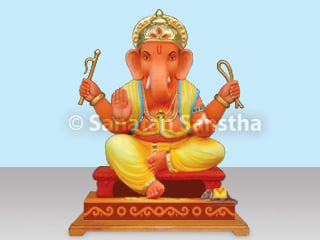 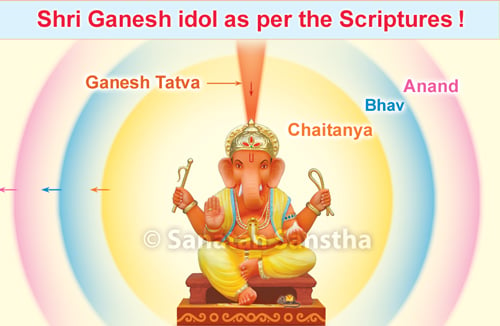 Knowledge of the spiritual science-based information pertaining to a Deity helps increase the faith in that Deity. Faith helps induce bhav (Spiritual emotion) in the ritualistic worship, and worship done with bhav is always more fruitful. This article explains the sculpture of Shri Ganesh, the variations found in the Idols of Shri Ganesh and the implied meaning of various parts of the Idol.

The sculpture of Shri Ganapati is given in the Shri Ganapatyatharvashirsha as ‘Ekadantam, Chaturhastam ….(एकदन्तं चतुर्हस्तं)’, meaning, He who is ekadanta, is chaturbhuja (Has four hands), bears a pash (Noose) and an ankush (Goad), holds a (broken) tusk in one hand and holds the other hand in a varadmudra, whose flag bears the symbol of a mouse, who has a red complexion, lambodar (Has large abdomen), whose ears are like sifting pans, who is adorned in red clothes, whose body is smeared with a paste of raktachandan (Red sandalwood) and who is worshipped with red flowers.

2. Some variations in Idols of Shri Ganesh

Sometimes one comes across Ganapati Idols in padmasan (A lotus posture) or at times even in nrutyamudra (A dance posture).

There is a Mundakata Ganesh Idol in the Himalayas. The Name itself suggests that this Idol is without the head. It is said that this is the Idol of the son who was created by Devi Paravati from the grime of Her body and who was later beheaded by Deity Shankar.

Just like the Divine phallus of Deity Shiva, that of Shri Ganapati too exists. It is called Ganapatayalinga. It is shaped like a pomegranate, lemon, white gourd or jamun.

In the Tantra path of worship, Shri Ganapati Idol is mostly nude. The Shakti (Divine Energy) of Ganesh too accompanies the Idol.

In the Shakta sect, Shri Ganapati is worshipped in the feminine form. Some such examples are given ahead.

Ganeshwari : An extremely attractive sculpted Idol of Ganeshwari is found in the Suchindram temple in Tamil Nadu.

Ardha Ganeshwari : It has a highly meaningful form in the Tantra path of spiritual practice.

Ganeshani : This female Deity is found in an extremely rare form of tantrik-mantrik worship.

3. Implied meaning of various parts of the Idol

Trunk curved towards the right : An Idol of Ganapati with the trunk curved towards the right is called Dakshinamurti or Dakshinabhimukhi murti. Dakshina refers to the southern direction or the right side. The southern direction leads to the region of Yama, the Deity of death, while the right side belongs to the Suryanadi (Sun channel). He who can face the direction of the region of Yama is powerful. So also, he with an activated Suryanadi is also radiant. Thus, in both senses, the Ganapati Idol with the trunk curved towards the right is said to be ‘jagrut (Awakened)’. Scrutiny of our demerits and merits is carried out in the region of Yama, that is, in south direction and hence, that direction is repulsed. The scrutiny akin to that done in the south region after death begins when alive, if one sits facing the south (or sleeps with the legs directed towards the south). The Dakshinabhimukhi Idol is not worshipped ritualistically in the usual manner because tiryak (or Raja) waves are emitting from the south. The ritualistic worship of such an Idol is performed by strict abidance of all the norms of ritualistic worship scrupulously. Consequently, the sattvikta (Purity) is augmented and the distress by the Raja-Tama waves coming from the south is prevented.

Trunk curved towards the left : An Idol with the trunk curved towards the left is called Vamamukhi Ganapati. Vam means the northern direction or the left side. The Chandranaḍi (Moon channel) is situated to the left. It bestows tranquillity. Besides, the northern direction, conducive for Spirituality, is Anand (Bliss)-bestowing; hence, mostly the Vamamukhi Ganapati is worshipped. It is worshipped ritualistically in the usual manner.

It is the destroyer of the energies, which are harmful to the mission of acquisition of spiritual knowledge and Anand. 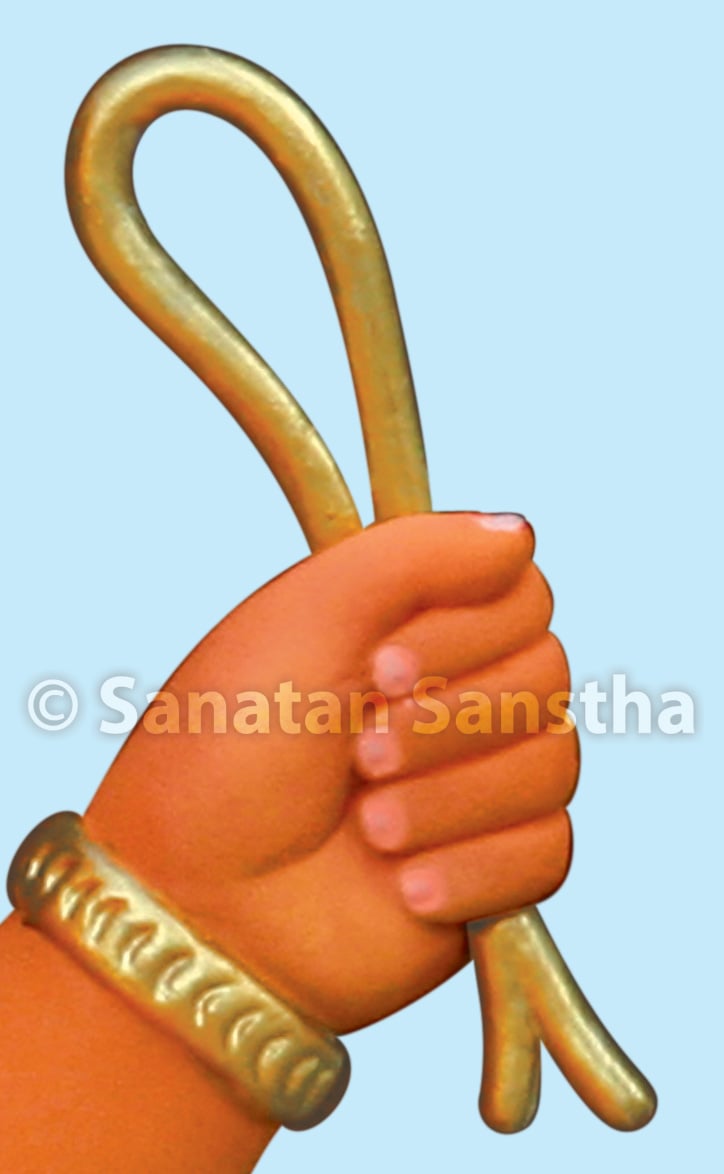 Shri Ganapati is one who will tie the noose around negative entities and take them away.

F. Serpent wound around the waist

G. Hood of the serpent 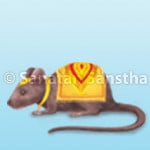 Mouse implies that the Raja component is under the control of Shri Ganapati.