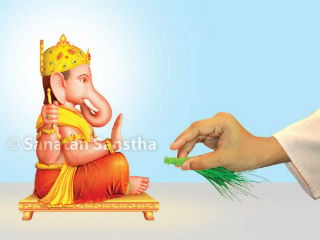 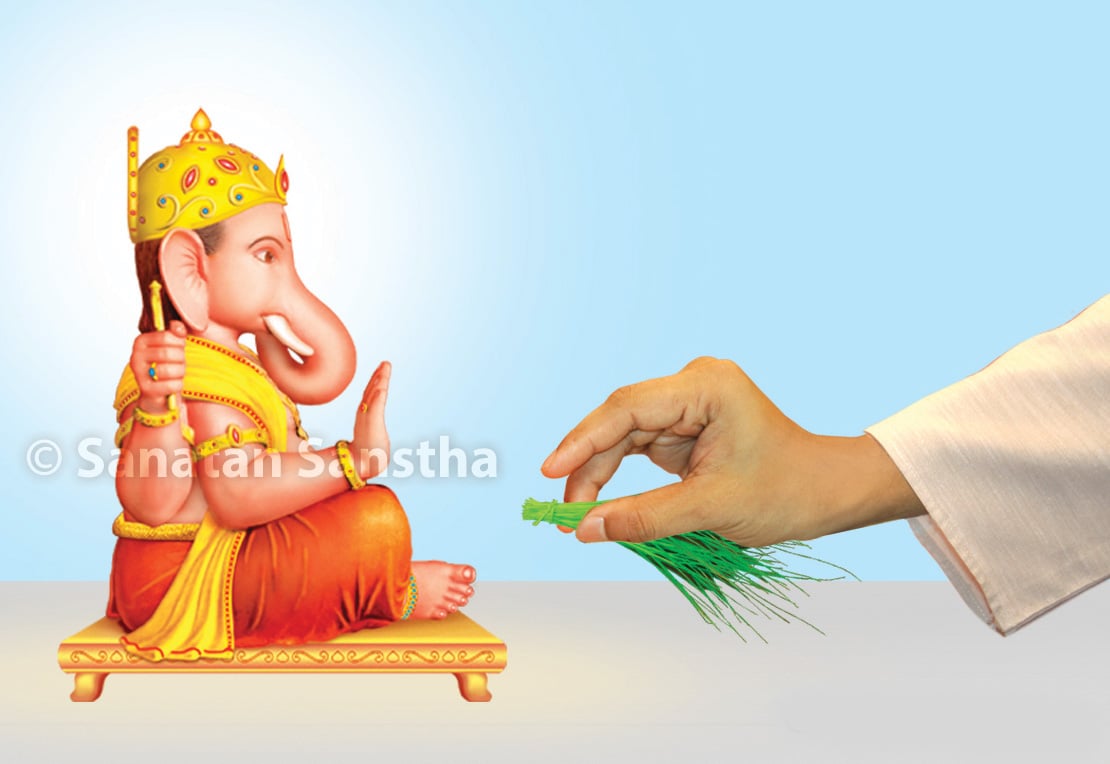 1. Origin and meaning of durva

A. Reason according to Puranas

B. Reason according to Ayurveda

According to Ayurveda, too, durva juice reduces the burning sensation in the body.

One aim of a ritualistic worship is that the divinity in the Idol that we worship should increase and should benefit us at the level of Chaitanya (Divine consciousness). Hence, it becomes imperative that those substances, which attract maximum amount of that Deity Principle are offered to the Deity. Durva has the maximum capacity to attract Shri Ganapati Principle; hence, it is offered to Shri Ganapati.

The durva to be offered to Shri Ganapati should be tender. It is referred to as ‘baltrunam’, meaning, young grass. When fully grown, it is categorised as a type of grass. The durva stalks offered should have leaves in odd numbers like 3, 5 or 7.

4. What should be the length of the durva ?

5. What should be the number of durva offered ?

Odd numbers are associated with the Shakti (Divine Energy) Principle. Durva is mostly offered in odd numbers (minimum of 3 or 5, 7, 21 etc.). This facilitates the entry of Shakti into the Idol in a greater proportion. Usually, 21 shoots of durva are offered to Shri Ganapati. The number 21 according to Numerology is 2 + 1 = 3. Shri Ganapati is associated with the number 3. Since the number 3 represents Creation, Sustenance and Dissolution, it is possible to destroy the 360 (Raja-Tama) waves with its energy. If durva is offered in even numbers, then more and more of the 360 waves are attracted first and later the 108 (Sattva) waves too.

The entire body of the Shri Ganapati Idol, excluding the face, should be covered with durva. Thus, the fragrance of durva will spread around the Idol. Since the Idol is covered with durva, this fragrance assumes the form of the Ganapati Idol and facilitates attraction of pavitraks of Shri Ganapati to this form. This is called the acquisition of a similar qualities by the Idol. This is what is called awakening of the Idol. The Idol is consecrated (also known as pranapratishṭha) to prevent the pavitraks, which have entered it, from escaping. The pavitraks remain in a greater proportion so long as the fragrance remains. In order to retain them there, the durva is changed thrice a day. Hence, ritualistic worship is performed thrice a day.

Divine Principle resides at the root of the durva, where the Ganeshtattva is created and it remains conserved in the stem’s void. It is then emitted into the environment. The worshipper obtains vital energy from the durva. A bundle of 21 durvas attracts the pavitraks from the universe and are received by the worshipper.