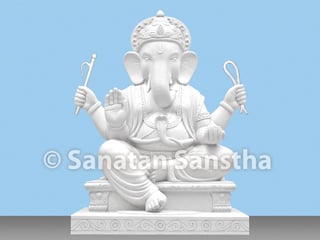 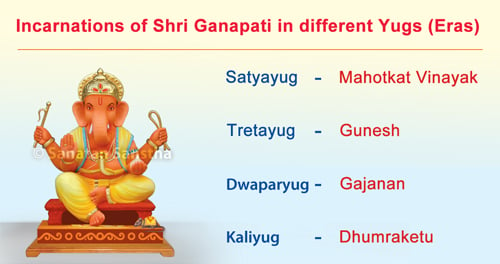 Each Deity is a Principle. This Principle exists for Eras together. The Principle of a Deity takes sagun (Materialised) form as per the requirement of that particular Era; for example, the nine Incarnations of Shrivishnu for carrying out specific missions in particular Eras. Depending on the requirements of the Era, which Incarnations of Shri Ganapati have taken place is given ahead.

Mahotkat Vinayak was born to the couple, Sage Kashyap and his wife Aditi in the Krutayug (Satyayug). In this Incarnation, He protected Dharma (Righteousness) by slaying two demons, Devantak and Narantak and then ended the Incarnation.

In Tretayug, Shri Ganapati was born to Uma on the day of Bhadrapad Shukla Chaturthi as Gunesh (a variant – Gajanan). In this Incarnation, He slew the demon Sindhu and married Siddhi and Buddhi, the daughters of Deity Brahma.

In Dwaparyug, once again, He was born to Devi (Goddess) Paravati as Gajanan. In this Incarnation, Shri Gajanan killed the demon Sindurasur and set free several kings and valorous men whom the demon had imprisoned. It is in this Incarnation that Shri Gajanan preached to the king named Varenya the eternal philosophy in the form of Ganeshgita, which enlightens about the paths to Moksha (Final Liberation), gives all supernatural powers, eliminates ignorance and elucidates the true goal of human life.

According to the Bhavishyapurana, the fourth Incarnation of Shri Ganapati by the name Dhumraketu or Dhumravarna will take birth in the Kaliyug (Era of Strife) and destroy the evildoers. 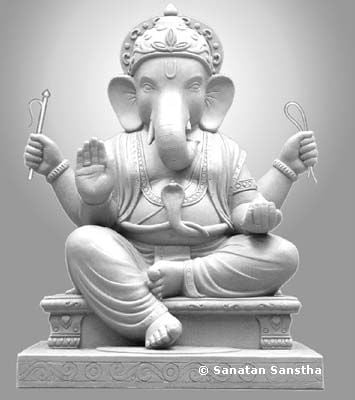