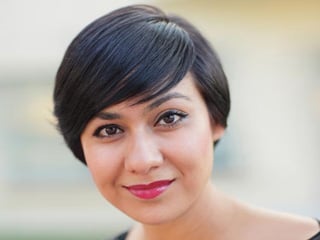 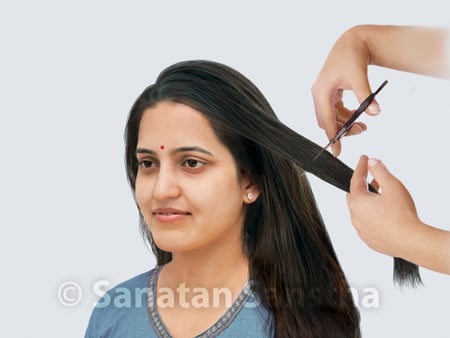 In an attempt to look beautiful, many women cut their hair short, move around with their hair hanging loose etc. An individual may admire such acts; however, they are an open invitation to attacks of negative energies. Cutting of hair for women is prohibited due to various reasons which we will find out from this article, as it explains in detail the consequences of cutting hair by women.

1. Harm caused to women when they cut their hair

2. Influence of having boy-cut on

The way an individual acts depends on his / her attitude. Also, an individual’s action affects his/ her mind and intellect, which in turn forms his/ her attitude. Accordingly, due to the Tama-predominant attitude, women cut their hair short like men do, and this action affects their mind and intellect. As a result, their behaviour, thoughts, speech and walk slowly undergo a change.

3. Short haircut for women is a

A. From childhood, Ms. Girija loved to have different hair-styles and liked the associated haircuts; but later, after commencing spiritual practice, she realized that this was due to spiritual distress

During childhood, she would frequently visit beauty-parlours and have different haircuts such as a boy-cut, mushroom-cut, ponds-cut, blunt-cut, step-cut, U-cut, Rasana-cut etc. During college days, she had short hair which would reach till her ears or shoulders. She adorned a blunt-cut at that time. Later, after commencing spiritual practice, she realized that it was because of the spiritual distress that the thought of having short hair persisted.

After a blunt-cut for some time, she changed to a step-cut in 2002. She perceived an increase in imbibing of distressing energy through it. In this hair-style, the tips of the hair are cut in a wave-like manner rather than cutting them straight. Shorter the hair or more haphazard the manner of hair-cut, greater is the amount of distressing energy imbibed. After commencing spiritual practice, she felt like keeping long hair instead of cutting them short, and began to perceive peace from within.

4. Aspects perceived after having a hair-cut

In 2009, Ms. Girija had a haircut. Given ahead are some observations made by her.

A. After the haircut, distressing energy got attracted to her, and as a result the mind became unstable and fickle

After the haircut, large proportion of distressing energy got attracted to her through the medium of hair. This distressing energy spread like lightening, initially in the head and then spread all over the body. As a result, instability and fickleness of her mind increased.

B. Manifestation of personality defects and ego resulted in impact of emotions lasting for a longer time

There was an increase in her fickleness and impatience. She could feel this while walking and talking. She used to be quickly affected by anger and sorrow, and this effect would last for a longer time. Many unnecessary thoughts played havoc on her mind.

5. Aspects perceived after visiting a beauty-parlour

A. From the photographs displayed in the beauty-parlour, Ms. Girija perceived that the negative energy was enticing women to go in for demoniacal hair-styles

Beauty-parlours display various photographs of short haircut for women. She would stare at them. Later, when she commenced spiritual practice, it dawned upon her, that by taking up an enchanting form, negative energies in the women were enticing others to go in for demoniacal hair-styles. When she looked at those photographs, she realized that the negative energy in her was also receiving energy through those photographs. After a while, faces of those women in photographs would appear scary and distressing.

B. In beauty-parlours, emission of Raja-Tama components and distressing energy takes place; hence, she perceived that the inclination of the visiting women towards Maya (The Great Illusion) was on the rise

Earlier, whenever she visited a beauty-parlour, she would feel good. Three-four years after commencing spiritual practice, she began to experience a lot of distressing vibrations there. The atmosphere within a beauty-parlour is constantly subjected to the waves of Raja-Tama components and distressing energy. This affects the body and mind of visiting women, thereby enhancing their distress. She perceived that they become extroverted, fickle, unstable and emotional, and their attraction towards Maya increases.

C. Women who have a haircut and also those who cut the hair of other women incur demerit

D. Mind became restless due to the grating sound of scissors

6. Message to abide by Dharma

In 1995, before His Holiness Bhaktaraj Maharaj renounced His body, along with some seekers I went to Panhala (District Kolhapur, Maharashtra) to have His darshan. In those days, I was suffering a great deal from hair-fall. As a remedy, my husband, Dr. Pandurang Marathe suggested that I cut my hair short; hence, I had cut my hair up to shoulder length. Another lady-seeker who was with us had cut her hair up to her ears. While talking to us, His Holiness Dr. Athavale casually commented, “Women say they cut hair for convenience, but hair is cut mainly for fashion”. After that, I never cut my hair. Every Hindu woman should make such a firm resolve when it comes to abiding by Dharma (Righteousness).

7. Spiritual experiences of a lady-seeker upon growing hair

A. Upon realizing that according to the scriptures it is inappropriate for girls to cut their hair, Ms. Girija let them grow

In 2004, when she realized that according to scriptures, it is inappropriate for girls to cut their hair, she decided to let them grow. During those days, from within she was not in favour of letting the hair grow (due to severe spiritual distress). In 2009, her hair grew up to 9 inches below her waist and she started braiding them.

B. She dreamt that someone has cut her hair in a haphazard manner, she felt it to be real and later realized that the negative energy did not like her growing her hair

Ever since she began to grow her hair, the negative energy within her began to get upset with her. At times, she would get an intense urge to cut her hair short and she would feel restless. She would dream that someone has cut her hair in a haphazard manner and she is looking very ugly. The dream would feel as if it was real. The thought, ‘How come I did not realize who cut my hair and when’ would scare her.