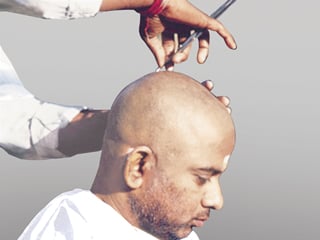 Men are generally associated with having short hair. Even when children draw men in their drawing books they always have short hair. In the name of being fashionable and trendy nowadays, we see many men having long hair with ponytails. Let us find out from this article, why should men should cut hair and why unlike women, long hair is detrimental for men. We shall also learn the auspicious and inauspicious times for getting a haircut. 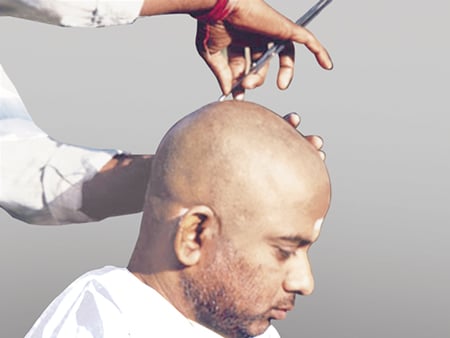 complementary for retaining his masculinity

Masculinity means solemnity in the form of righteousness; whereas, femininity denotes the swiftness in the form of Shakti (Divine Energy) functional due to the Raja component. Man symbolizes Shiv (God Principle) form. Being Shiv form means being introvert. In introversion, the proportion of inactive Shakti is greater; meaning, in this state, the proportion of function of emission is greater. Man inherently possesses lesser Raja component when compared with a woman. Hindu Dharma advocates performance of acts complementary to developing the Shiv Principle in the self, meaning, masculinity and hence, refrains from growing hair long.

2. Days on which men should cut hair and should not cut

A. Science underlying the acts of not having a haircut on inauspicious days, new-moon days and full-moon days, so also during noon, evening and at night :

C. Hair should not be cut on the date and tithi (A lunar day) of birth : Hair should also not be cut on the date and tithi of birth. If done on these days, our ability to imbibe waves arriving from planets, constellations and stars linked to our prakruti (basic nature) reduces, leading to a reduction in the benefit we get from the Deity of worship, thereby causing us harm at the spiritual level. Similarly, the merit accrued by us through the blessings of others on these days also reduces.

3. Importance of an Ascetic performing

kshourkarma on full-moon and new-moon days

Ascetics are permitted to perform kshourkarma on full-moon and new-moon days; because, this ritual helps in unloading the Raja-Tama-predominant burden of hair from their body. Similarly, due to recitation of mantras during the ritual of kshourkarma, the hair is purified right up to the roots.This helps in enhancement of the Tejtattva in the Ascetic; as in Sanyasdharma this is possible only by constant recitation of the mantras. Hence, it becomes strictly essential to follow the Sanyasdharma. However, this is not applicable to an average individual.

4. Why one should not cut hair during chaturmas?

Spiritual harm caused when hair are cut during chaturmas :

A. Process : When hair is cut, the hair follicles are exposed to the environment. As a result, subtle Raja-Tama-predominant sound from these hair follicles gets emitted swiftly into the atmosphere.

B. Effect : Negative energies are attracted towards this sound, and they attack the environment around the body of the individual.

C. Harm at the spiritual level :