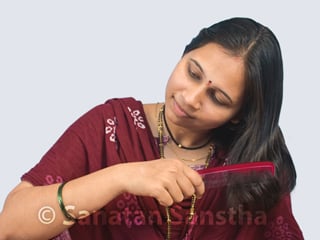 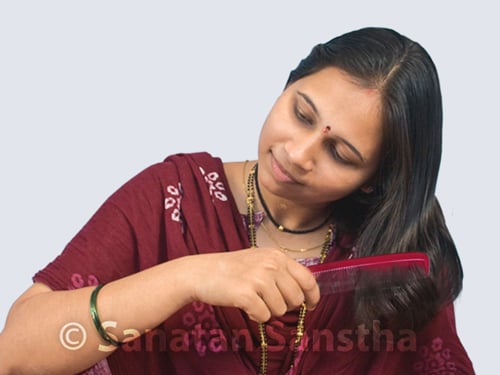 In the earlier times for combing hair, women would sit in front of a wooden box that had a mirror, used to keep a comb, kumkum (Vermillion) etc. and throw the hair (that would fall while combing) into the fireplace. But rarely do we see such conducts being followed today. Most of the women nowadays will be in a hurry to comb their hair and run for work, so they find no time to follow the achars of sitting and combing hair, Many women also have shorter hair which they prefer leaving it open. In fact, dressing tables built nowadays do not even come with an attached chair like before; this shows that the tradition of sitting and combing hair has become non-existent. From a spiritual point of view, this is degradation for mankind. This article provides specific reasons behind why this is considered an unhealthy step, and how we can protect ourselves from the negative effects arising from non-abiding of achars by following simple steps. 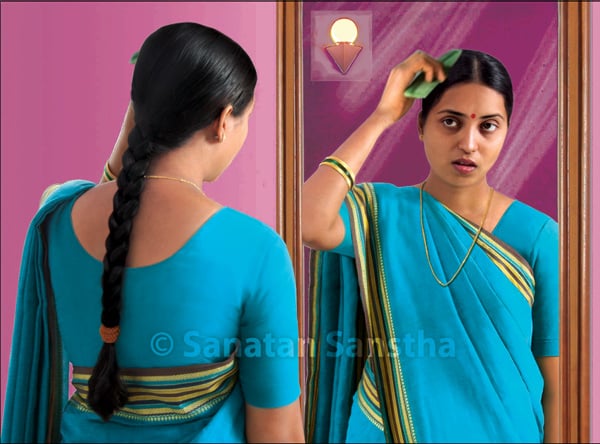 A. With three fingers dipped in hair-oil, drawing a boundary before combing

In the earlier times, there was a custom of chanting the Name of the Kuladevata (Family Deity) and using oil for making three dots with three fingers at the four corners of a wooden seat, before a woman seated herself for combing her hair. Through this process of making three dots, a mandal (Protective sheath) of Raja-predominant waves was created around the seat, thus creating an obstacle to the interference of negative energies in the Raja-Tama-predominant process of combing the hair.

B. Correct method of combing hair

In the earlier times, women would comb their hair only after sitting slightly bending forward, with the right leg folded and holding the knee towards the stomach, in front of a wooden box having a mirror used for keeping the comb, kumkum etc. By moving the double-sided comb through the hair in a forward bending posture, the Panchaprana (Five vital energies) would constantly remain in an awakened state. After a bath, looking at the mirror for applying kumkum to the forehead and for combing the disheveled hair with a double-sided comb would result in spiritual healing on the woman through the medium of the mirror, thereby reducing the proportion of Raja-Tama-predominant vibrations entering the woman. (Nowadays, the sight of women combing their hair sitting in front of a wooden box having a mirror is rare. The modern trend is to use a single-sided comb instead of a double-sided comb on the hair. However, combing hair with a double-sided comb (instead of single-sided comb) is superior.

2. Importance of regular washing of the comb

3. Importance of avoiding the use of other’s comb or belongings

In March 2008 I misplaced my single-sided comb. For 2 – 3 days, I used the comb of a lady-seeker friend who did not suffer from spiritual distress. Thereafter, whenever she used that comb, her head would get heavy and she would feel restless. This proved that a large amount of distressing energy is accumulated in the hair of the lady-seekers who suffer from distress due to negative energies, and the comb used by them also gets charged with that distressing energy. I then realized why those suffering from negative energy distress should not use each other’s comb or belongings.

4. How to charge the comb with Chaitanya?

A. Necessity of purifying the comb

The comb too gets affected by the Raja-Tama-predominant waves in the hair; hence, the comb should always be kept clean and charged with Chaitanya. Do not comb your hair with an unwashed or ’impure’ comb after you have had a head bath. The comb should be purified in the gross and the subtle using methods mentioned ahead.

B. Keeping comb in a wrapper of incense-sticks, it gets charged with Chaitanya, thereby making reuse possible

C. Importance of waving the smoke of incense-sticks

D. Why purify the wrapper of incense-sticks in which the comb is kept?

A. Rapid extraction and elimination of distressing energy on combing the hair with a double-sided comb

B. Importance of a small wooden box with a mirror in it

In the earlier times, articles (kumkum, wax and double-sided comb) would be kept in a small wooden box with a mirror in it, and as a result of the dormant fire in the wood, they would remain pure.

6. Conducts to be followed for combing hair

A. It is essential to bathe only after combing hair

Many women comb their hair after a bath to avoid the hair from getting disheveled. Whatever transmission of Raja-Tama-predominant waves into the body takes place during the process of combing hair is destroyed due to purification of the body through the medium of bathing. Therefore, it is a custom to comb the hair first and then bathe. Conversely, the body becomes impure upon combing the hair after a bath. This in itself is an indication that in Kaliyug (Era of strife), man is only interested in external cleanliness, that is, external beauty of the body, and has drifted away from spiritualization of life, meaning, has drifted away from true conduct.

B. Young girl paying obeisance to her mother after the mother braided her hair

The process of a girl paying obeisance to the mother after her mother braided her hair would eliminate the Raja-Tama-predominant waves that had developed in the girl’s body, due to generation of bhav (Spiritual emotion) in the form of Divine Principle. After making a braid, the hands were washed only in flowing water, because the sinful effects of the contact with the Raja-Tama-predominant waves in the hair would also be eliminated by washing the hands in flowing water.

C. Why the hair that have fallen during combing should not be immediately thrown out ?

D. When the hair that have fallen while combing are immediately thrown out, there is a possibility of the mantrik causing distress through their medium 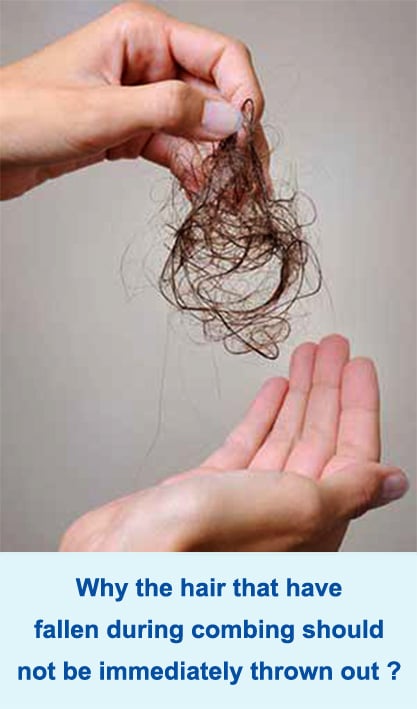 E. Burning the bunch of fallen hair after spitting on it

In the earlier times, after braiding the hair there was a custom of spitting on the bunch of fallen hair and then throwing this bunch in fire at a place where water was being heated. By spitting on the bunch of hair, the Raja-Tama-predominant waves related to our body, spread in our body in the process of making a braid, would enter the bunch of fallen hair, and Raja-Tama-predominant waves related to our body and contained in that bunch of fallen hair would be brought to the maximum emission level. Thus, by burning the bunch in the fire, their movement in the body would be curtailed. The swiftly moving Raja-Tamapredominant vibrations, activated in the body through the medium of spitting, would be automatically emitted and their burning would cause automatic spiritual healing of the body.

F. Necessity of washing the comb and the hands after combing hair

In the earlier times, the comb and the hands were washed after combing the hair. This would automatically prevent the effect of negative energies on the body through the contact with Raja-Tama predominant waves.

G. Why should the hair not be combed at night

7. Combing and not combing hair after they have been washed

A. Effect of not combing hair after they have been washed

‘I washed my hair on Chaitra Shukla 7 (12.4.2008), but did not comb them till the night. The flow of Chaitanya coming from God had spread from the head downwards on to the hair; but since the hair had not been combed, distressing waves were being spread from the small hair protruding through the uncombed hair. I saw an increase in the distressing energy covering around my head and spreading of a thin layer of black colour in the environment.

B. Effect perceived on combing hair

When I combed my hair neatly, I perceived a reduction in the distressing energy covering around my head.’ – Mrs. Rajani