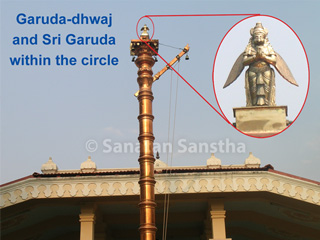 All of us must be aware of certain actions that have to be performed when taking darshan (A view of the Deity) in a Devalay, like removing one’s footwear, doing Namaskar at the main entrance of the temple, etc. Many a times, questions may have arisen in our minds as to what could be the reason behind these actions. Based on the knowledge provided by the Hindu scriptures, the following article answers some of these questions.

1. What is the reason for removing all objects made of leather before entering the Devalay?

2. Why should we remove our footwear before entering a Devalay?

A. Wearing of Raja-Tama predominant objects like sandals and shoes facilitates the entry of waves, which flow from the earth to Patal (Hell region) into the Devalay and thereby reduces or destroys the sattvikta within the Devalay

Devalay is a centre for collective worship. For all to get utmost benefit of the Chaitanya (Divine consciousness) emitting from the Devalay, it is incorrect to visit a Devalay wearing Raja-Tama predominant and dusty objects like sandals and shoes. They can facilitate the entry of waves flowing from the earth to Patal (Hell Region) into the Devalay and thereby reduce or destroy the sattvikta within the Devalay. Should the prevalence of waves connected with Patal increase on the outskirts of Devalay, in a way there is a likelihood of developing a subtle Patal. Therefore, as far aspossible avoid wearing such objects while visiting a Devalay. Footwear should not be removed even in the Devalay premises, because of the presence of waves of Deities and their ganas (Assistants); especially in a Shiva Devalay, where His ganas are always present. Removal of footwear in the premises leads to the development of a sheath of Raja-Tama particles over the sattvik waves emitting from the Deity’s Idol. This reduces the sattvikta of the area and the individual also does not benefit from the sattvikta. Besides, if any gana (Assistant) becomes angry, the individual may have to face its wrath and suffer spiritual loss. To avoid this spiritual loss, do not remove your footwear in a Devalay premises; remove them outside the premises instead. If this is not possible or if the Devalay is on the roadside, you should enter the Devalay only after a sincere prayer asking for forgiveness to the Deity.

B. Picture based on subtle-knowledge depicting adverse effects of having darshan in a temple with the footwear on 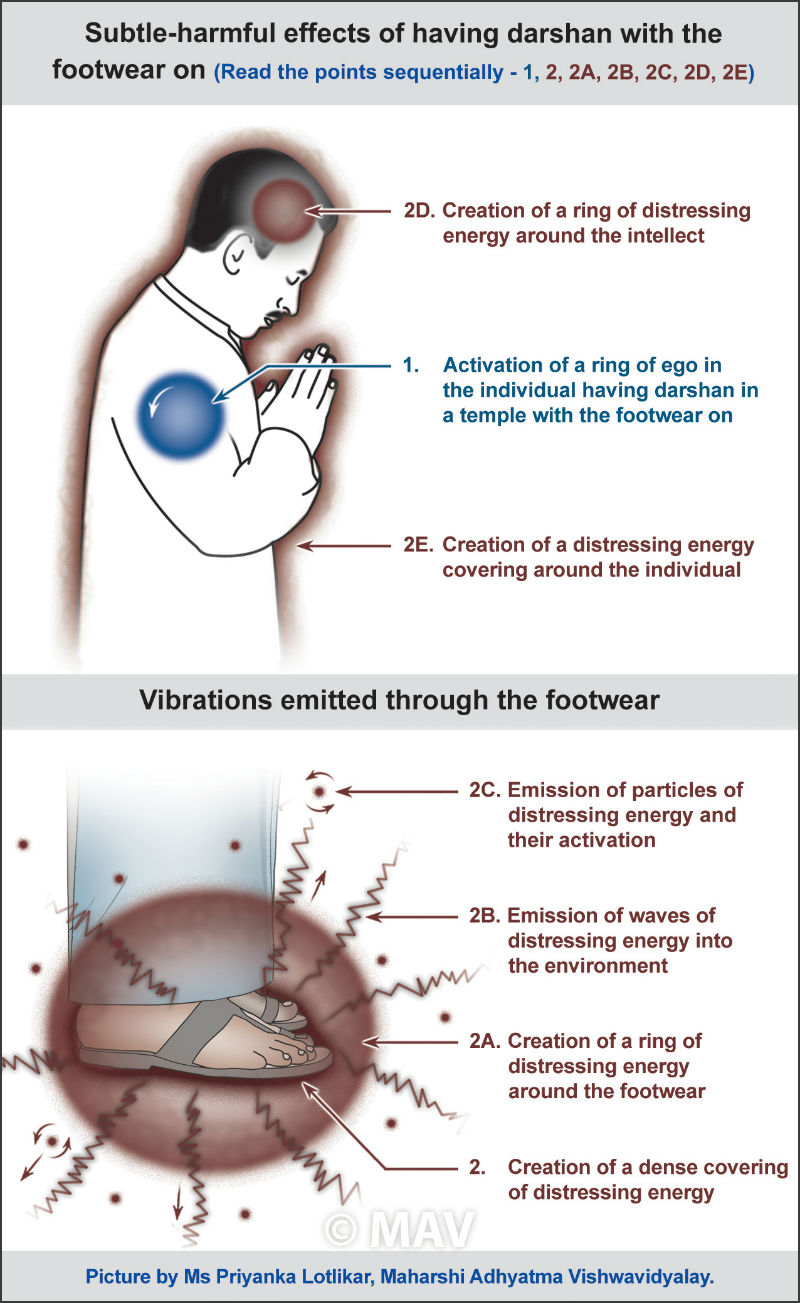 D. Do not remove the footwear right in front of the Devalay

The removal of footwear on the line in front of the Devalay leads to creation of a subtle-line, which resembles the subtle-line of the Patal region; as a result, the extremely hot flows of black fibres flowing along the subtle line of Patal get activated on the line formed by footwear and block the flow of waves emitting from the Devalay.

Question: ‘Why is the wall of Raja-Tama formed if footwear is placed in front of a Devalay? Why are the Raja-Tama predominant waves not destroyed by the waves emanating from the Deity? 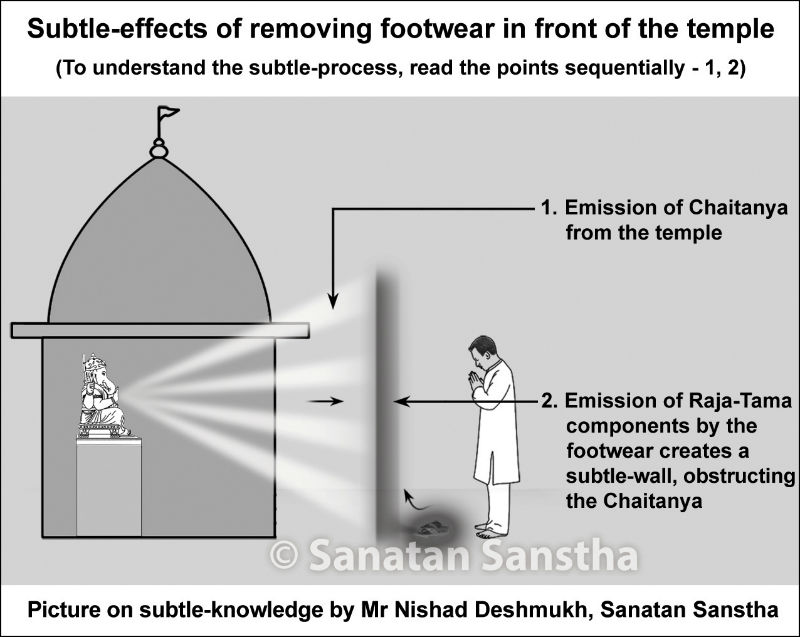 Answer: The removal of footwear on the line in front of the Devalay leads to creation of a subtle-line. This line develops a resemblance to the subtle central line of the Patal region. The Raja-Tama particles from the footwear form a pull exerting field like a whirlpool, that unites the line from the Patal region and the line of the footwear in equal proportion. This further leads to streams of very hot black energy fibres flowing on the line of Patal region, gaining momentum on the line formed due to the footwear. This blocks the flow of sattvik waves coming from Devalay. The flow of sattvik waves emitting from the Idol, though beneficial, is not strong enough to oppose the original line of Patal and hence, the restrictions on their movements.

E. If it is unavoidable to remove footwear within the Devalay premises, then remove them on the right side of the Deity 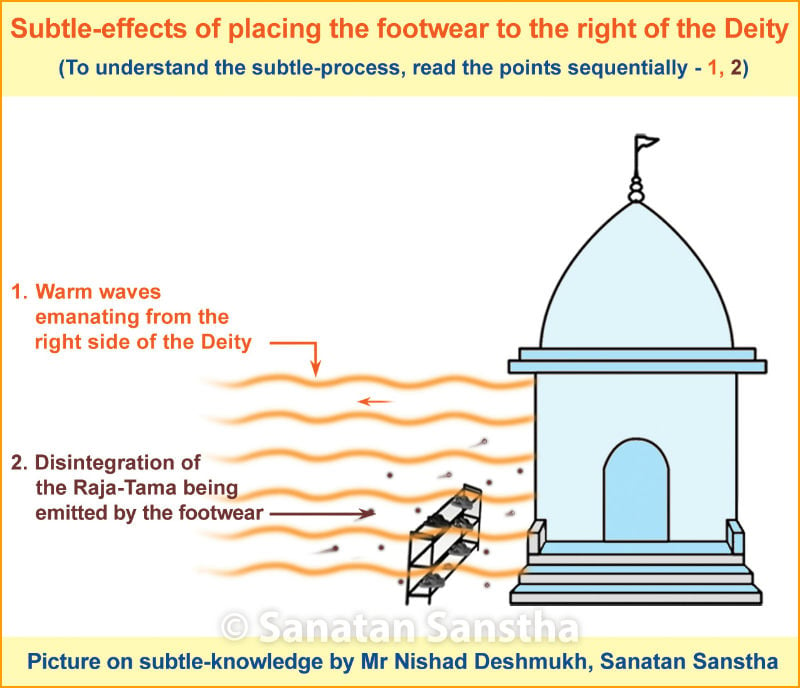 Since samashṭi (For the welfare of the society) task takes place in the Devalay, the tarak (Saviour) side (that is, the Sun channel) of the Devalay’s presiding Deity is always in an awakened state. Therefore, there are warm waves outside the Devalay. They disintegrate the Raja-Tama component being emitted by the footwear kept outside the Devalay. Also, since the act of destroying the Raja-Tama predominant waves gets localised (in the area where footwear are kept), the waves emitting from the Deity are better charged with activity and are emitted in a larger proportion.

3. Why do we need to wash our feet before entering a Devalay? 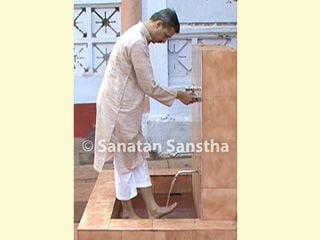 (Earlier, Hindus used to wash their feet in a pond outside the Devalays before entering them. Now-a-days, most Devalays either do not have such ponds or people are not aware of the importance of washing their feet before entering a Devalay, that is, they lack religious understanding and hence, they enter the Devalay without washing their feet. This is one of the reasons for the reduction in the sattvikta of Hindu Devalays.)

4. Why should we not cover the neck with a cloth while having darshan of the Deity and the Guru?

To benefit 100 percent from each sattvik wave and sattvik particle emitted by the Deity and the Guru, we should not cover the neck with a cloth

Meaning : While doing pradakshina, Namaskar and Japa, while performing havan and while having darshan of the Deity and the Guru, we should not cover the neck with a cloth.

The underlying science : When one is performing the actions mentioned above, sattvik waves emitting from the Deity or a Saint revolve around the person in a spherical manner. If the person has good bhav, then these sattvik waves revolve around him for a longer period of time and start affecting the person’s mind and the body. If the person covers the neck with a cloth, then he is not able to benefit from these waves. Also, due to obstruction by the cloth, the Vishuddha chakra(Fifth centre in the spiritual energy system located in the neck in the subtle body) of a person is not awakened, and thus, the sattvik waves are not able to enter his body. Thus, in order to obtain 100 percent benefit from each sattvik frequency and sattvik particle emitted by the Deity and the Guru, we must not cover the neck with a cloth. 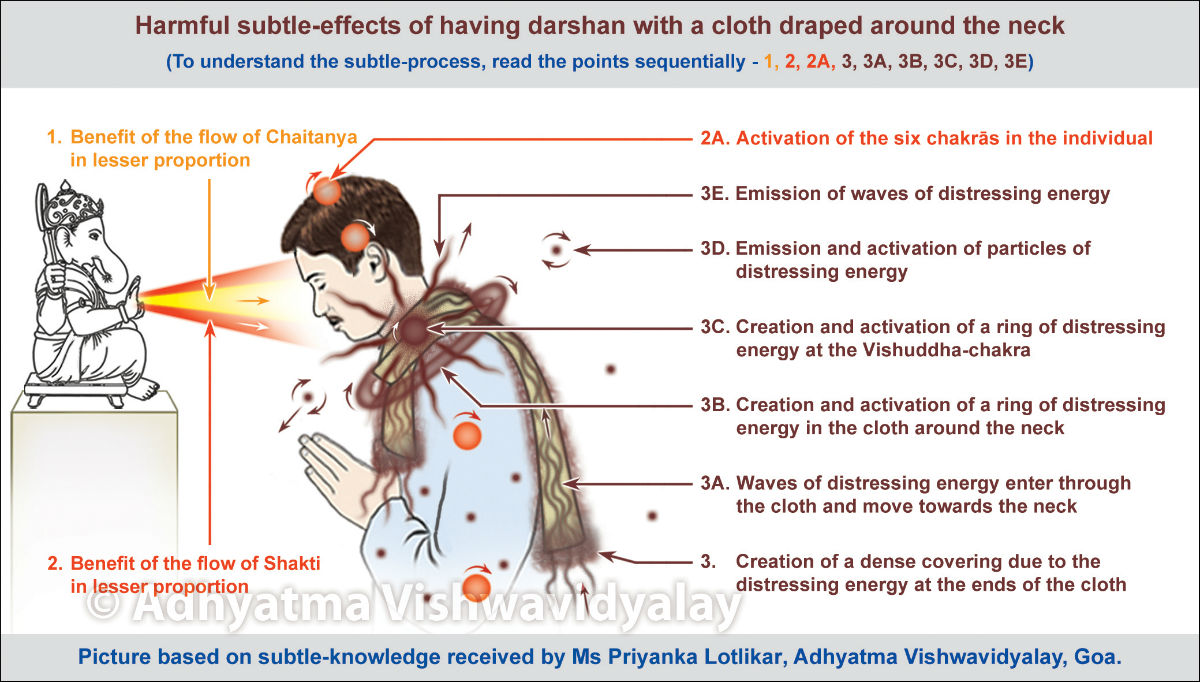 5. Why should we do Namaskar to the main door of a Devalay and the Garuda-dwaj?

2. Namaskar to the main entrance door and Garuda-dhwaj of the Devalay denote developing the ‘impression of humility’ by the individual for entering into the region of Deities.

3. Namaskar to the main entrance door and Garuda-dhwaj of the Devalay denotes pleading to various inferior waves moving about in the Devalay, through the medium of Namaskar and making an easy entry into the Devalay : Devalay is a home in the manifest form to God’s Dharma oriented Divine set up. Therefore, Shakti always remains active on all the four sides of the Devalay and protects it from attacks of negative energies. When an individual from the outer environment enters the Devalay, which is a source of sattvikta, it encounters the resistance for its entry from the energy that opposes Raja-Tama particles. An individual with a spiritual level of 40% and above can tolerate the opposition and easily proceed inside; but other individuals with lower spiritual levels cannot tolerate the opposition from the Divine Energy and can suffer from distress such as headache, nausea, fatigue and blurring of vision. However, when an individual does Namaskar, the waves opposing the entry get pacified and it can enter the Devalay with ease. Therefore, as far as possible, all visitors should enter the Devalay only after doing Namaskar, according to spiritual science.

4. Namaskar to Garuda-dhwaj : Garuda is a Principle that holds the particles of Dharma associated with Sustenance. Hence, Garuda-dhwaj is found in front of the main entrance doors of all Devalays. The sagun (Materialised) layout of the Devalay, based on particles of Dharma associated with Sustenance and the Divine Principle active within, lasts only in the form defined by their state. At the same time, Garuda emits these particles of Dharma associated with Sustenance in the three dimensions of nature (The flow of energy – at the level of Ichha [Will], Kriya [Action] and Dnyan [Knowledge]) provides Chaitanya to Sattva particles present in the environment. Thus, it also acts as a medium that maintains the environment neutral). Namaskar to the Garuda-dhwaj that carries so much importance amounts to Namaskar to and expressing gratitude towards the Vayu (Absolute Air)-form Divine Principle. Namaskar to Garuda dhwaj suppresses the waste gases present in the outer environment that oppose the entry into the Devalay and thus the individual can enter the Devalay

5. Namaskar to the main entrance door of the Devalay : The Devalay is a sagun form of the region of Deities. Namaskar to the main entrance door amounts to making an impression of humility on the self, before entering the region of Deities and receiving their blessings. The act of Namaskar generates Divine qualities in the subconscious mind of the individual, as a result the Deity’s blessing get attracted towards the This enables the individual to imbibe sattvikta without encountering any resistance.