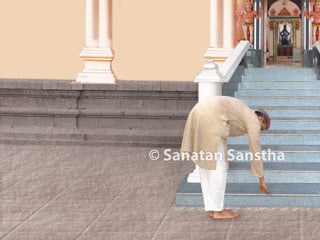 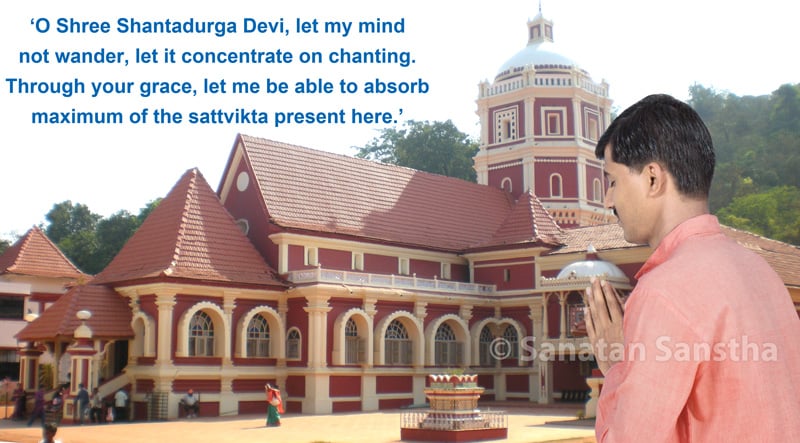 Did you know that we can derive maximum benefit from the darshan, if we were to take note of some actions which should be performed as prescribed by Hindu Dharma while visiting a Devalay (Temple)? There is a science underlying most of these actions. These actions are elaborated below.

1. Prayer to be made at home before leaving for a Devalay

‘O ____ (Name of the Deity), only due to the inspiration provided by you, I am able to come for your darshan. Let me have your darshan with bhav (Spiritual emotion).’

2. Gratitude to be expressed after reaching the Devalay

‘O ____ (Name of the Deity), you only have given me the opportunity to have your darshan; hence, I express gratitude at your Holy feet.’

3. Actions required to be performed before entering a Devalay

1. Leather objects worn should be removed and kept aside.

3. If there is a facility in the Devalay, feet should be washed.

4. After washing the feet, take some water in the right palm, and reciting ‘अपवित्रःपवित्रोवा’ sprinkle the water thrice over your body.

5. Do not cover your neck with a cloth.

6. If there is a custom of removing the upper-body garment (like a shirt) by males before entering a Devalay, then it should be followed. (This may not appear practical, yet the custom is followed to retain the sattvikta of the Devalay).

7. While visiting a Devalay for darshan, ordinary male-devotees should wear ṭopi (Bharatiya cap, used especially during rituals) or tie a Holy cloth on the head, whereas female-devotees should cover their head with pallu (Free end of a sari, normally worn over the shoulder). Males & females with a spiritual level above 50% need not cover their head. In this regard, follow the prevalent tradition.

8. Pay obeisance to the main entrance door and Garuda-dhwaj (Sentinel flag) of the Devalay.

9. Prayers to be done before entering a Devalay

10. Do Namaskar by touching each step of a temple with right hand and then touch the Adnya-chakra (Sixth centre or chakra in the spiritual energy system; located in the mid-brow region in the subtle-body) with the same hand

4. Actions required to be followed once inside the Devalay premises

1. Have darshan of the kalash (Dome of a temple) of the Devalay and pay obeisance to it.

3. While proceeding towards the sabhamandap (Assembly hall of the temple), hold the hands in Namaskar-mudra. (Both the hands joined and held at the level of the Anahat-chakra [The fourth centre in the spiritual energy flow system, located in the region of the heart in the subtle-body], but a little away from the body.)

4. At that time, the bhav should be as if we are going to visit our revered Guru or the Deity and that ‘Our Guru or Deity is looking at us.’

5. While climbing the steps of a Devalay, touch the steps with the fingers of the right hand and then touch that hand to the Adnya-chakra (Sixth centre or chakra in the spiritual energy system; located in the mid-brow region in the subtle-body).

6. While stepping inside the sabhamandap, pray thus – ‘O Deity, let me benefit from the Chaitanya (Divine consciousness) being emitted by your Idol to the utmost’. 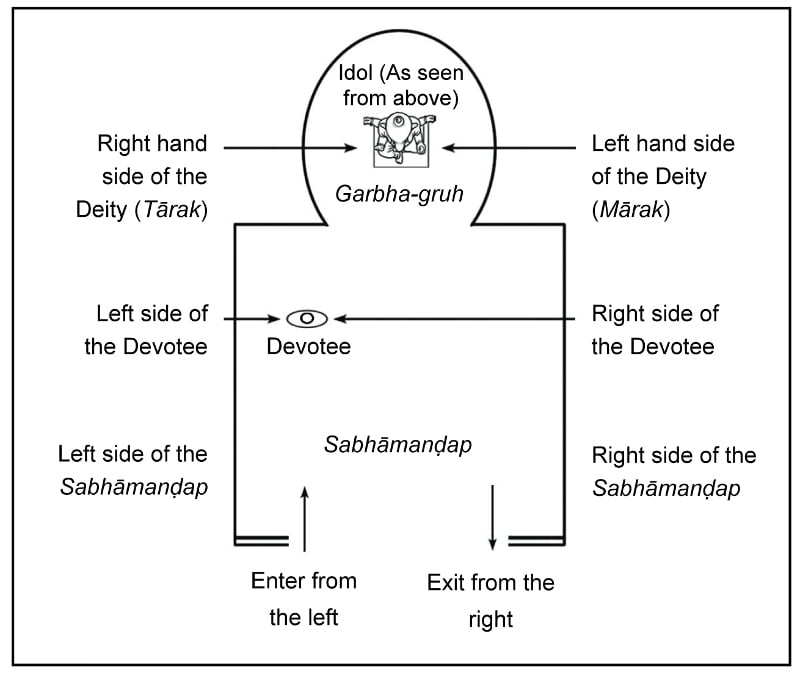 5. Having darshan of the Deity

5A. Actions to be performed before having darshan of the Deity

1. As far as possible, avoid ringing the bell. If you wish to ring it, do so in a very low tone.

2. Before having darshan of the pindi (Deity Shiva’s sacred symbol) in a Shiva Devalay, have darshan of Nandi by touching both its horns. This is known as Shrungadarshan. The correct method of Shrungdarshan is – We should sit or stand to the right side of Nandi and place our left hand on Nandi’s testicles. We should place the forefinger and the thumb on the two horns of Nandi. Then, we should view the linga (Deity Shiva’s sacred symbol, also known as the Divine phallus) through the frame thus created by the finger, thumb and the horns.

3. Entering a garbha-gruha is mostly prohibited. However, in some Devalays it is permitted. At such times, before entering the garbha-gruha we should do Namaskar to Shri Ganapati and Shri Kirtimukh.

5 B. Actions to be performed while having darshan of the Deity’s Idol

2. In the first stage, focus your attention at the feet of the Idol and with emotion of complete surrender, pray for the dissolution of the ego. In the second stage, concentrate at the chest level of the Idol, that is, at the Anahat-chakra and pray intensely. In the third and the last stage, concentrate on the eyes of the Deity and store the Deity’s image in your eyes.

5 C. Actions to be performed after having darshan of the Deity

From the perspective of imbibing maximum of the Deity’s Principle while inside a Devalay, the ancient Devalays had an ideal design. Such ideal Devalays used to have a garbhagar (Anteroom), a space joining the sabhamandap and garbha-gruha. So also the Yadnyakundạ (Pit for the sacrificial fire) used to be on the right side of garbha-gruha, while the Devalay of Deity Suryanarayan used to be on the left side. Such Devalays can still be seen in Goa. 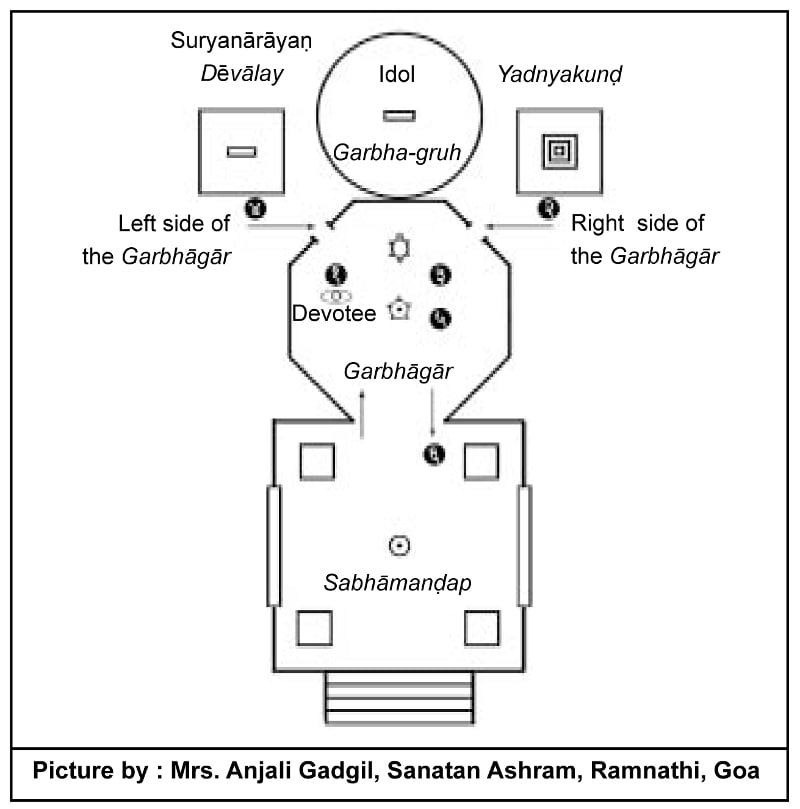 1. Come out through the door on the right side of the garbhagar (sanctum sanctorum) and have darshan of the Fire Deity, meaning, the mandap (Hall) containing the Yadnyakunda.

2. Then, enter the garbhagar again and coming out of the door onto your left, have darshan of the Idol of Deity Suryanarayan (if there is one).

3. Once again enter the garbhagar and have darshan of the main Deity.

4. Perform pradakshina (Circumambulation) of the Deity

5. Offering wealth, coconut etc. to the Deity
The object for the Deities should be offered at their Holy feet and not thrown at their body. If the Deity’s Idol is not approachable, then place it in a plate kept in front, with a bhav that it is actually being offered at the Deity’s feet.

5 D. Actions to be performed while leaving the Devalay