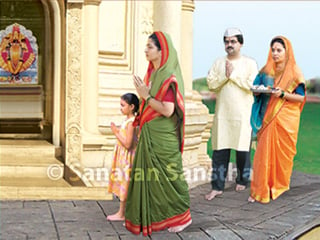 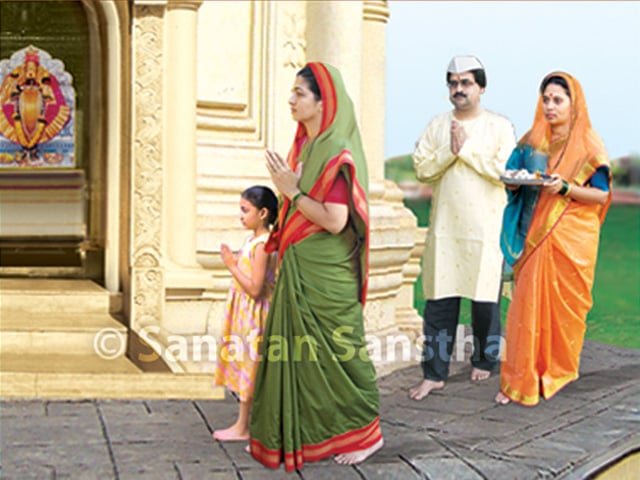 1. How many pradakshinas should be performed around a Deity?

Many of us go to the Devalay (Temple) to have a darshan (viewing) of the Deity. In order to take maximum benefit of the darshan, one must do pradakshina (circumambulation) of the Deity. To commence the pradakshina, one can start moving at normal pace from the left side of the garbha-gruha (Sanctum sanctorum) with hands folded in the Namaskar-mudra (Both the hands joined and held at the level of the Anahat-chakra [The fourth centre in the spiritual energy flow system, located in the region of the heart in the subtle-body], but a little away from the body), while chanting the Deity’s Name. After the pradakshina, pay obeisance to the Deity, and only then commence the next pradakshina.

2. Reason for different number of

pradakshinas to be performed around a Deity 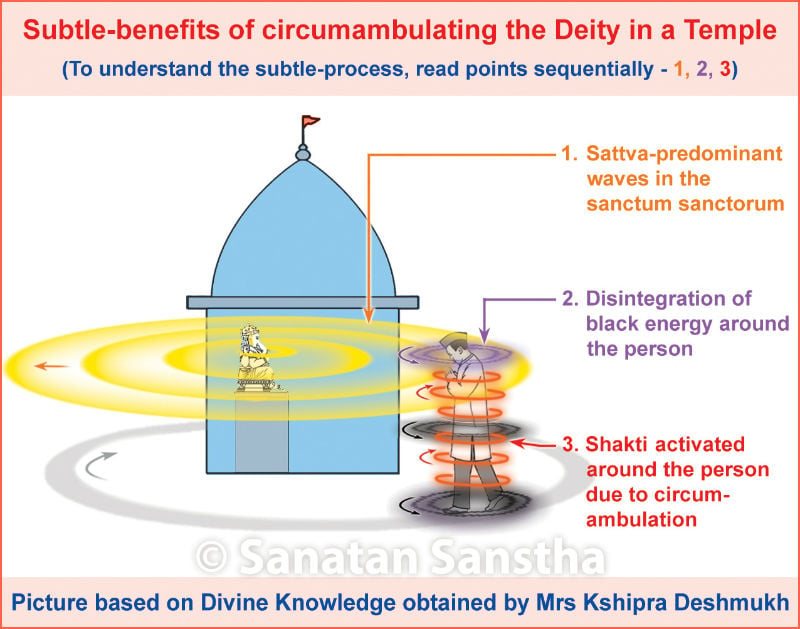 associated with each of the Sapta-devtas

There are specific number of pradakshinas prescribed for each of the Sapta-devtas (The seven Deities, namely, Shri Ganesh, Deity Shiva, Shriram, Deity Hanuman, Deity Datta, Shri Durga and Shrikrushna).

The number of pradakshinas mentioned against a Deity’s Name in the table ahead denotes the minimum number required for the respective Deities. Should a larger number be intended, then it should be done in the multiples of the minimum number specified.

A. Method 1 – Subordinate forms of the Deities

The rule mentioned here applies to the subordinate forms of these Deities.

Note 1 : Pradakshina of the Shivapindi (Deity Shiva’s sacred symbol): The method of performing the pradakshina around the Shivapindi is ‘Somasutri’, that is, in a crescent shape. The ‘sutra’ (A channel) that passes from the shalunka (Base of the linga [Deity Shiva’s sacred symbol], also known as lingavedi) towards the North side, that is, towards the boundary of the Devalay is called ‘Somasutra’. We begin the pradakshina from the left side and go till the outward projecting channel of the shalunka; then, without crossing it, turn back and come unto the channel from the other side and thus complete one pradakshina. The flow of a shalunka is not crossed, as it is the flow of energy. When crossing it, the legs are spread. As a result, formation of semen and the five vayus (Internal vital air energies) are adversely affected. There is an obstruction in the flow of Devdatta and Dhananjay vital air energies too. However, these ill effects do not occur if while crossing it, the body is contracted, that is the nadis (Energy channel) are contracted. 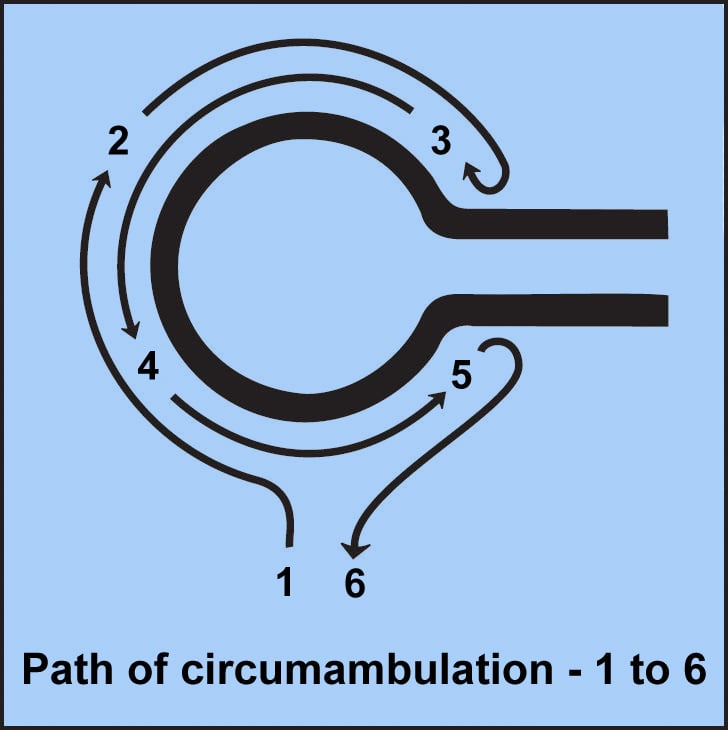 This law is applicable to man-made Shivalinga; however, this is not applicable to a Swayambhu (Self-originated) linga or to the Shivalinga in the Devalay at home. The way a pradakshina is done in a complete circle in case of other Deities, is not done in the case of the Shivapindi. Hence, the number of pradakshinas advised in case of Deity Shiva is zero.

B. Method 2 – As per the Sattva, Raja and Tama component and nirgun tattva (Principle):

B. Experiencing Shanti Srikrushna Sattva and sattva-Raja  Sattva-predominent waves are yellow in colour, while Sattva-Raja are reddish yellow  1 or 2 (Either in advait nirgun form or in dvait, this is functioning in the sagun form)  A. Awakening of bhav, love and kshatrabhav

B. Experiencing Anand Deity Datta Predominantly nirgun-tattva and to some extent Sattva component of the sagun-tattva  White, golden yellow and sometimes faint blue  3 (Combined form of Brahma, Vishnu and Mahesh)  Nirgun-tattva is not generated by performing pradakshina just once. For that, one has to perform pradakshina thrice. This increases the sattvikbhav of a seeker Deity Maruti Sattva-Raja, 50% Sriram’s principle and marak-shakti  Saffron and dark blue  2,5,7,11,13,21,77,99 and 101  A. Reduction in the desire as caused due to negative energies

B. Increase in enthusiasm (Awakening of kshatrabhav)

C. Method 3 – As per the Energy and function of the Deity:

Meaning : One pradakshina should be performed around the Goddess, seven around Sun Devalay, three around Shri Ganapati, four around Shrivishnu and a half around Shiva Devalay.

4. How many pradakshinas should be

performed around a Swayambhu Devalay

Since the activated energy in a Swayambhu Devalay cannot be imbibed by a common man, only one pradakshina is sufficient. An individual with over 50% spiritual level can make as many pradakshinas as he wants as per his bhav (Spiritual emotion). There is no limit to the number of pradakshinas for him.

Reference : Sanatan’s Holy Text, How should one have darshan in a temple?