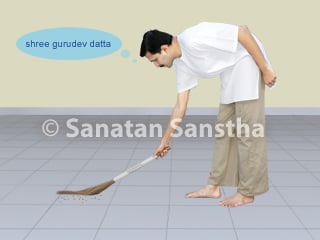 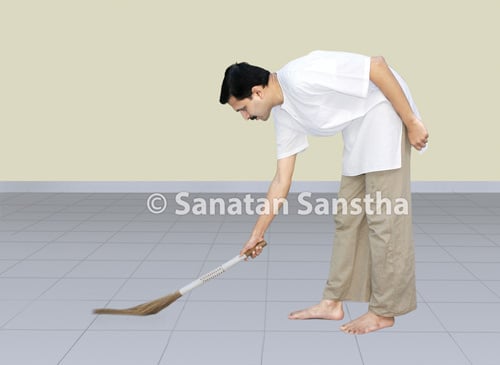 1. Appropriate time for sweeping and its underlying science

Everyone knows how to clean the house and the courtyard. From the scientific and hygienic point of view, cleanliness is important. However, at a spiritual level, this is an important Conduct (Achar). Abiding by it, one benefits at the subtle level too.

Sweeping with a broom creates friction with the floor and distressing vibrations are generated. In addition to the person who is sweeping with a broom, these vibrations are distressful for the other members of the family too in less or more proportion. When one sweeps in the morning, due to the sattvik and Chaitanya waves present in the environment, these distressing vibrations are kept under control and no one is distressed by the act of sweeping the floor. Hence, sweep the floor once in the morning only. Some people sweep the floor in the evening too. If the floor is swept in the evening, there is a greater possibility of negative energies entering the premises (Vastu).

2. Methods of sweeping the floor

Some people sweep the floor by bending forward at the waist, whereas some do so while squatting. Now-a-days, a vacuum cleaner is also used instead of a broom for cleaning the house. This appliance does clean at a gross level; however, it has adverse effects at a subtle level.

3. Appropriate method of sweeping the floor

Effects at subtle level while sweeping the floor

3A Spiritual science underlying bending at the waist

Bending at the waist for sweeping exerts pressure at the nabhi chakra and its five vital energies (Panchpran) are awakened. By bending on the right side, the person’s Sun channel (Surya-nadi) is activated and the person is protected from the distressing vibrations emanating from the earth through the medium of the Absolute Fire Principle (Tej-tattva).

Due to the posture of the body created while sweeping by bending on the knees, the Rajasik-Tamasik air accumulated in the void of the knees gets momentum and there is a possibility of the distressing waves emanating from the Hell region towards the environment getting attracted towards the person. This is the reason why we should not sweep the floor in this posture.

By dragging or drawing the broom towards the rear while sweeping, rapid whirls moving in an anti-clock wise direction are created and the distressing vibrations adjacent to the ground get accumulated in these whirls. This is the reason why instead of dragging/drawing the broom in the rear direction, one should lift the broom, again sweep from the rear and take the broom forward.

3E Why the broom should not be thumped on floor or dragged with force?

Distressing sound is created by actions like sweeping the floor forcefully or thumping the broomstick. Due to this, the distressing vibrations of the Hell region and the premises get activated. This is the reason why such actions are avoided.

In olden days, the floor was waxed with or smeared by cow-dung. Today’s houses have tiles which need to be swabbed with a damp cloth. Modern appliances are also available through which the floor can be swabbed while standing too.

4A Effects of swabbing the floor with an appliance

4B Correct method of swabbing the floor

Due to the posture formed by bending and swabbing the floor with the right hand, the five vital energies present in the Manipur chakra are activated. By the activation of the Sun channel (Surya-nadi), the vitality of the body in the form of Absolute Fire element (Tej-tattva) is also activated. The flow of activated vitality is transferred in the cloth through the right hand. This creates a protective sheath of Absolute Fire Element on the ground with the help of the Absolute Water Element (Apa-tattva) present in the water. This sheath obstructs the distressing vibrations. Thus, by swabbing the floor immediately after sweeping the floor with utmost spiritual emotion and chanting, the rajasik-tamasik distressing vibrations are destroyed. The premise becomes sattvik and full of Chaitanya. This not only benefits the premise but also all the family members spiritually.