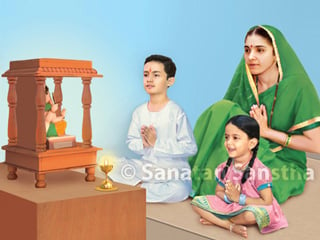 In the earlier times,the evening prayer ‘shubham karoti’ used to be recited at dusk after lighting lamps in the house; today’s children are engrossed in watching television instead.Truly, Hindus are drifting progressively from Āchārdharma (Code of Conduct) prescribed by the Hindu Dharma. Following this Āchārdharma is the foundation of Spirituality.

1. Appropriate conducts to be observed during during transition period (Sandhikal)

Definition of Sandhikal (Transition Period) : The duration of forty eight minutes (Two Ghatikas) before sunrise and after sunrise is called ‘sandhikal’. It is also called ‘Parvakal’.

1.1 Lighting dhoop (Frank incense) in the house in the evening

This purifies the vastu (premises), as well as the clothes of the people residing in the house.

1.2 At dusk, after lighting a lamp in the temple at home, offer obeisance to it 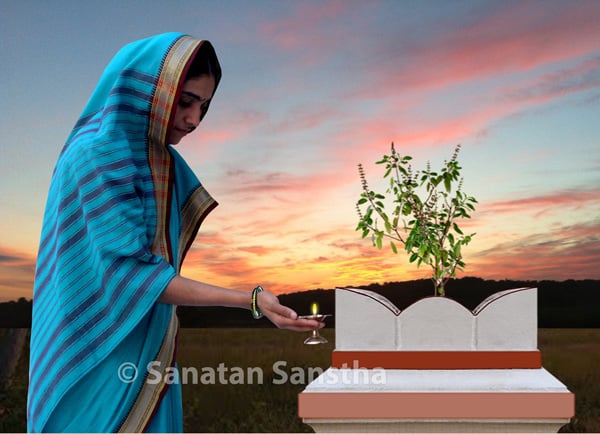 At dusk, lighting an oil lamp in the temple at home and near the tulsi plant creates a protective sheath of sattvik waves of the Deities around the house. This protects the people in the house from distressing vibrations generated from the activation of negative energies in the atmosphere. That is why, the scriptures recommend that we return home before dusk and do not leave the house thereafter. People may suffer from negative energy attacks at dusk. Worshippers of the Aghori (A sect which worships Deity Shiva) science gain control over the negative energies that enter the atmosphere of the earth at dusk, and get evil acts performed through them. That is why, this period is ‘the period of distress or destruction’

After lighting the lamp, recite the following shlokas (Shlokas are usually part of stotras which are prayers to the Deities) :

Meaning: O flame of the lamp, you bestow auspiciousness and wellbeing, health and wealth. You also destroy the intellect of enemies. Therefore I pay obeisance to you.

Meaning: Light emanating from the oil lamp is in fact, a form of Parabrahman (Supreme Brahman)

An oil lamp is Parameshwara (Supreme God), eliminating the sorrow in the world. O lamp, absolve me of sins. I offer obeisance to you.

B. Benefits of reciting shlokas

C. After Reciting shlokas offer Arti (A ritual of waving a lit lamp in front of a Deity, accompanied by singing of hymns) to the Deities and then pray

2. Acts prohibited during the evening (Sandhikal)

Since the prevalence of negative energies during sandhikal is high, the following acts are prohibited :

1. Avoid looking at the mirror at night 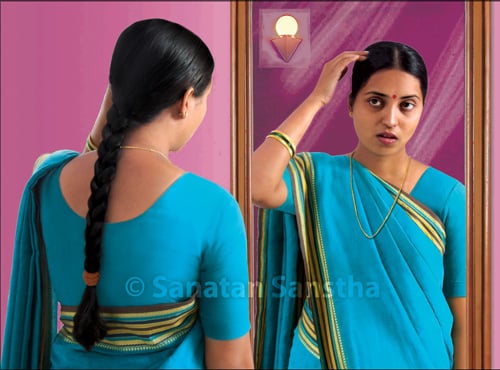 (This is prohibited because a power full negative energy from the environment can instantly attack one’s mirror image ) Since the night is favorable for the circulation of Raja-Tama components, it is associated with subtle Raja-Tama movements and closeness with negative energies. Since a mirror image of an individual is more closely linked with subtle waves of the jiva (embodied soul), it can be attacked instantaneously by a powerful negative energy from the environment.

2. Avoid dancing or singing under the influence of alcohol

Dancing and singing after consuming alcohol during the night as entertainment, hobby or just to pass the time, increases the Tama component in a shorter time and there is a possibility of the individual suffering from severe distress due to negative energies. Besides, increase in the Tama component of an individual pollutes the surrounding atmosphere and that in the house.