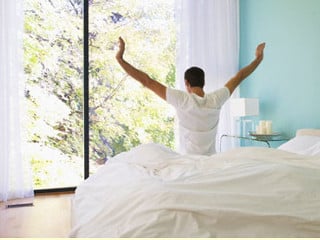 1. Waking up at the Brahmamuhurt

As prescribed by the scriptures, wake up at the Brahmamuhurt before sunrise has two muhurts (Auspicious time); of these the first is called Brahmamuhurt. At this time, the human intellect and the energy for compiling a Holy text is good. Hence, the noun ‘Brahma’ is prefixed to this muhurt.

2. Normally, why do we yawn after waking up?

The mouth is an opening for removing of Vayu (gases). Sattva-uttprerak gas, functional in a person, is released along with words that it utters and imparts momentum to the subtle form of these words. Since the gases generated in the body at night are not expelled through the mouth during sleep, they accumulate in the body and are activated in the morning, and are expelled in large proportion through the mouth of a person. That is why we yawn.

3. Activities to be performed upon waking up

Shrotrachaman means touching the right ear with the right hand and reciting the twenty-four Names of Shrivishṇu, starting from ‘Om Shri Keshavaya Namaha’. Since the Deities Aditya, Vasu, Rudra, Agni, Dharma, Ved, Apa, Som, Anil etc. all dwell in the right ear, even the touch of the right hand to the right ear gives the result of an achaman. Achaman leads to internal purification.

C. Kardarshan (Looking at the palm)