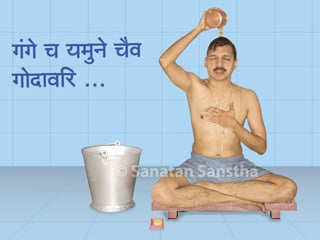 1. Benefits of bathing – Importance of a bath 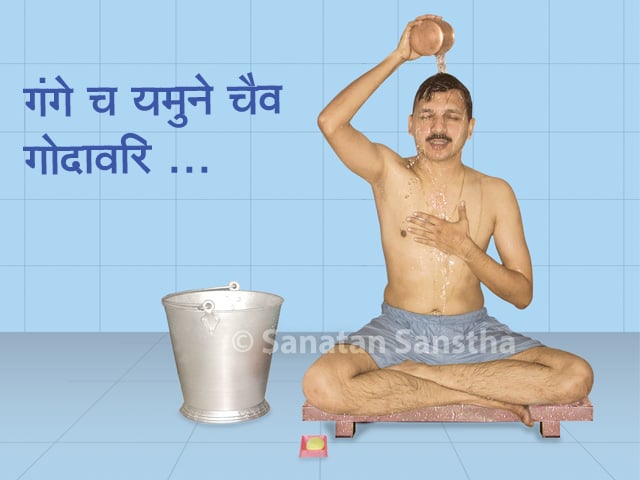 A bath rids a person of the black energy enveloping it and also destroys the Raja-Tama components in its body, thus making every cell in its body conducive to absorb Chaitanya (Divine consciousness). The distressing components generated during brushing of the teeth and evacuation of faeces, which are yet not expelled by the body, are destroyed through a bath.

3. Benefits of bathing in the morning

4. Benefits of bathing – Types of bath

Before comprehending these, it is necessary to understand their underlying science. Dawn is the transitory period between darkness and the beginning of a day and transpires two ghatikas (48 minutes) before sunrise. [A ghatika is an ancient Bharatiya measure of time; 1 ghatika = 24 minutes].

At this time, the sky appears red. The period before dawn consisting of three ghatikas (72 minutes) is called the Brahmamuhurtkal. Both these periods change with the time of the sunrise.

B. Abhyangsnan (Bath after an oil massage) 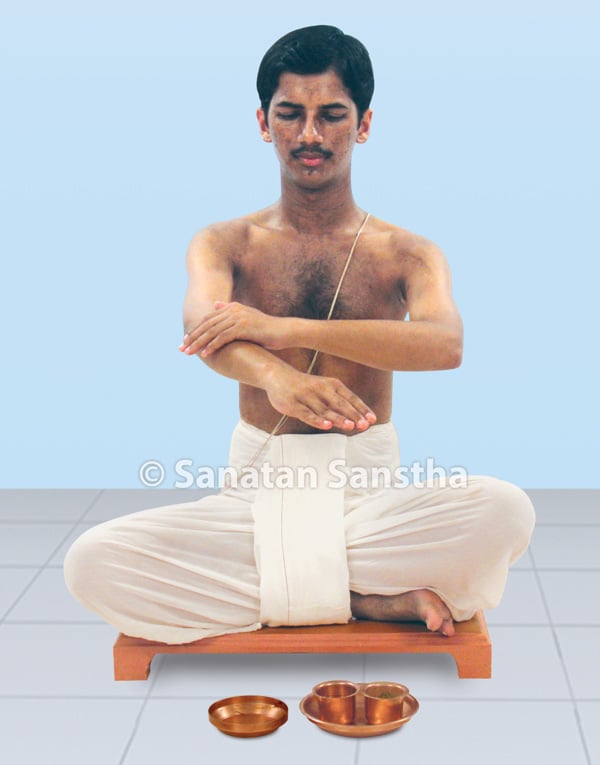 If we bathe under an Ashvattha (Holy fig tree) on a Thursday and in a river on Amavasya (New moon day), the merit obtained is equivalent to bathing at Prayag (Holy place of Allahabad) and cleanses us of all sins.

If we bathe in a river during the period of the Pushya constellation, our birth constellation or Vaidhruti-yog (Name of one of the 27 auspicious times that is active during sunrise), then we are cleansed of all sins.

E. Kamyasnan: Kamyasnan is a bath under religious acts, had with the intention of fulfilling some desire such as acquiring wealth, eliminating disease etc.

5. Benefits of bathing – Where should one bathe?

Bathing in a river or a water body is ideal; bathing in a well is fairly good, while bathing in the bathroom at home is inferior.

6. Benefits of bathing – Why should we bathe in the morning?

The significance of bathing at the Brahmamuhurt or dawn has already been explained. That is the ideal time for a bath. However, today, for most people, that time is inconvenient for bathing; so bathe as early as possible after sunrise.