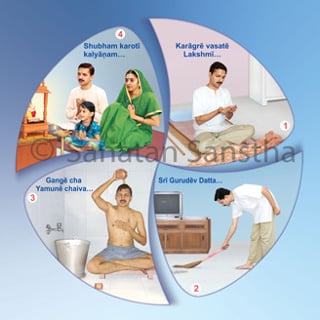 Activities performed from waking up till retiring for the day are collectively called Dinacharya.

A. Dinacharya should go hand in hand with the laws of Nature : Dinacharya is planned such that a man remains healthy all his life and without any illness. The health of an individual depends upon his diet, exercise and actions. Thus, Dinacharya is important from the perspective of health. If Dinacharya is in harmony with the laws of Nature, then man will benefit and not get distressed. Hence, it is necessary to behave in harmony with Nature (as advised by Dharma [Righteousness]); for example, waking up early in the morning, rinsing the mouth, cleaning the teeth and taking holy bath. The human lifestyle today works against the laws of Nature, that’s why Man today has fallen prey to various disorders of the digestive tract, throat, heart etc.

3. Some karmas (actions) included in Dinacharya

All karmas right from waking up in the morning till retiring to bed at night are included in Dinacharya. Details of some of them are given below.

A. Nityakarma : Activities which when performed result in gaining only purification of the subconscious mind, and yet their non-performance leads to demerits – these are called nityakarma. For example, chanting the Gayatri-mantra and performing sandhya are nityakarma for a Brahman.

B. Karmas to be performed from dawn till dusk : Twelve hours of the day are divided into five parts – pratahkal (Dawn), sangavkal (Morning), madhyanadin or madhyanhakal (Mid-day, i.e. Noon), aparanhakal (Afternoon) and sayanhakal (Evening). The activities to be performed in each part are given ahead.

Today, Hindus are drifting away from the Achardharma (Code of conduct) prescribed by Hindu Dharma.

Following Achardharma is the foundation of Spirituality. Everyone should take cognizance of the principle that, man can be truly happy only by adhering to Spirituality, and not by use of modern gadgets. Every achar (conduct) in Hindu Dharma has been designed to reduce Raja- Tama components and enhance sattvikta (Sattva-predominance; Purity), and get protection from distress due to negative energy through every activity. Indeed this is the unparalleled uniqueness of Hindu Dharma. Along with other paths of spiritual practice such as Dnyanayoga (Path of Knowledge) and Karmayoga (Path of Action), Acharadharma also leads to God Realisation.

A. Steps in the Development of Achars