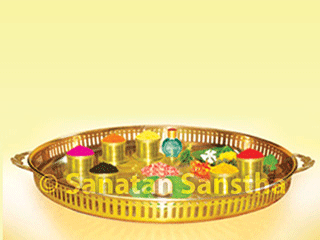 In the Era of Strife, (Kaliyug), man doubts the very existence of God. In such a spiritual climate, offering Arti has been designed as an easy means for man to be able to realise God. Offering Arti means calling out to God with intense yearning. If a human being calls out to a Deity through the medium of the Arti then he is granted either a vision of God in the form of light or of the Deities' form. – Mr Bhushan Kulkarni

The hymns in an Arti which are in praise of the Deities, also entail an earnest prayer made unto God to win His grace. The Deities and God who bestows grace, are pleased with the praises and worship of the one who offers Arti.

Composers of the Arti

Most of the Artis have been composed by Saints and evolved devotees. An Arti contains both the resolve and blessings of the spiritually evolved. Thus, a seeker benefits at the material and spiritual level due to the benefit accrued through Their 'Energy of Resolve'.

According to the Path of Devotion it is very essential that the follower develops devotion and spiritual emotion towards God sooner rather than later. In the primary stages it is difficult to develop spiritual emotion unto the formless, that is, the unmanifest principle of God. However, a seeker feels close to God with a form which has attributes and a human appearance. He is able to develop spiritual emotion unto Him faster. Arti is an easy medium of worship to the manifest form of God. The subtle form of the words sung in the Arti softly touch the idol or the picture of the Deity placed in front and return to those listening to or singing to it. This affects the worshippers subtle bodies. The words in the Arti transmit the sattva component accompanying them to the subtle bodies of the worshippers. Consequently one who sings the Arti feels light. The spiritual emotion of the worshippers is awakened due to the activation of the sushumna nadi (central channel) by the words in the Arti .' – Ms Madhura Bhosale

As the principle of the Deity is more functional during Arti, a seeker derives more benefit from the energy and Chaitanya (Divine consciousness) of the Deity. That is why our presence in the temple during the offering of Arti is more beneficial than our presence there at any other time.

(Ref:  Sanatan's Publication – 'How to Offer an Arti')