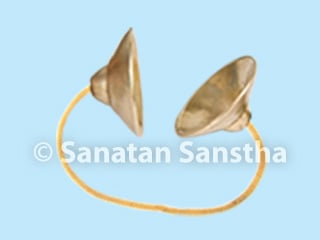 The bell used in ritualistic worship should be sounded only when singing the Arti. The sound of the bell should be melodiously and evenly maintained throughout the Arti. The frequencies of Deities in the Universe, attracted to the Arti move constantly towards the devotee because of the frequencies in the energy of the sound transmitted by the bell. Due to this energy, the sattva predominant frequencies transmitted by Deities are converted into subtle waves. Since these vibrations are most subtle, their effect on the environment lasts longer. The energy created by the Arti is bound in these vibrations. Hence, the subtle sound of the Arti transmitted by these waves can be heard even after the Arti is over.

The sound created by the cymbals generates identical rhythmic subtle sound frequencies all over in the environment. These frequencies activate the Sushumnanadi in the body of the one singing an Arti or devotional songs. These subtle frequencies attract the principles of the Deities and their sattva component towards them and transmit them into the environment and to the embodied souls, through the sound. In this way, cymbals attract the ultra-subtle frequencies of Deities through its sound and transform them into subtle frequencies. The embodied soul is able to conveniently imbibe these frequencies. As cymbals function to a greater extent in the ‘saviour’ form, sounding them activates the sattvik bhav. (Ms Madhura Bhosale, 16.1.2005, 7.00 to 12.12 pm)

(Ref:  Sanatan’s Publication – ‘How to Offer an Arti’)