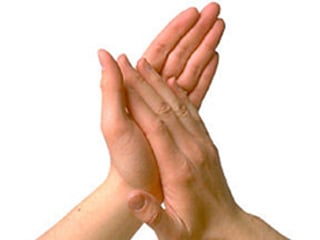 Singing the Arti should be accompanied by clapping. For seekers in the primary stage clapping should be done softly to maintain a rhythm. For those in the advanced stage, instead of clapping, one should attempt to look inward and become introverted. When singing the Arti, in addition to the clapping, musical instruments should be played.

It is incorrect to clap on occasions other than during the singing of Artis, as it brings about a stance that does not enhance the purity element within. Nowadays people clap during a discourse of Saints, at spiritual meetings or at religious functions; this is prevalent, but incorrect. Bliss should never be expressed by clapping; because due to the mudra (posture) created by this, the Surya-nadi (Sun Channel) in the human body is activated. The Surya-nadi in the body is known as 'tamogun-vardhini' (one which increases the Tamogun in us). The Moon channel in the body is known as 'rajogun-vardhini' as activation of this channel increases the influence of raja component in the body. The Sushumnanadi (central channel) is known as 'sattvagun-vardhini', as activation of this channel increases the influence of sattva component in the body. That is why the Sushumnanadi is beneficial for the practice of Spirituality. The mudra created while clapping causes the activation of the Surya-nadi in the body and there is an increase in the tama component in the body, thus reducing the proportion of sattva component. Hence clapping is against the tenets of Sanatan Dharma, which teaches us how to acquire the sattva component.

Even though clapping increases the tama component, how it is useful in aiding the Arti is explained ahead.

Why should a seeker in the primary stage clap while singing an Arti?

During singing of an Arti one should clap gently to maintain a rhythm. According to the science of Spirituality the reason for this is as follows: We appeal to the Deity via the medium of the Arti. The frequencies of sound generated by singing the Arti have the capacity to appease the Deity. When we restrict the sound of the Arti to a taal (rhythm) by clapping, the frequencies of sound created by the Arti become melodious. Thus we can activate the Deity and Its principle then begins to function. As the bhav of the devotee is awakened during the Arti, the sattva component in his body is already high. As his Sushumnanadi is activated at that time, the clapping does not have much effect on his body. (Pujya (Mrs.) Anjali Gadgil, 10.1.2004, 12.15 pm)
When singing an Arti, besides clapping, musical instruments should be played, as it will help in awakening bhav in a seeker in the primary stage of spiritual practice. At this stage the seeker's attitude is extroverted. But, as the goal of a seeker is to achieve introversion, to attain the next stage in his progress he should concentrate on becoming introverted rather than clapping or playing musical instruments during the Arti. Once introversion occurs, the seeker does not need to even utter the gross words in the Arti, as the Bliss he experiences is beyond words and is superior.
(Ref: Sanatan's Publication – 'How to Offer an Arti')