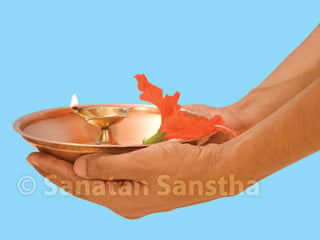 How to do Aarti

Various Saints and evolved devotees have composed devotional Aartis (hymns in praise of the Lord) from approximately the twelfth century on wards. They are thereby making available a beautiful and easy medium to light the lamp of devotion in the hearts of worshipers and enable them to invoke and imbibe the grace and blessings of a Deity by offering Aarti. Singing an Aarti conceived with the resolve of Saints accomplishes these objectives, but only when it is sung from the heart and as per the science of Spirituality.

How to do aarti – This playlist includes :

1. Harmful effects of singing aarti non rhythmically and without bhav

2. Acts to be performed after aarti

4. How to offer aarti with bhav

5. Methods of moving the aarti platter

We pray at the holy feet of the Guru that may everyone understand and perform Arti in accordance with the science and experience an increased awakening of their spiritual emotion. – Editor

(Ref:  Sanatan’s Publication – ‘How to Offer an Arti’)