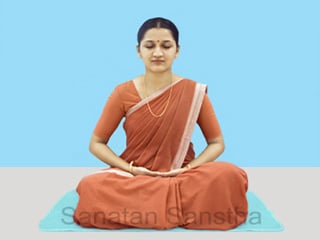 1. Benefits of chanting according to psychology

An individual is composed of two parts, the physical body and the subtle body. The physical body is what is usually referred to as the body. The subtle body is composed of nineteen constituents namely – the five subtle sense organs, the five subtle motor organs, the five vital energies (pranas), the conscious mind, the subconscious mind, the intellect and the ego [embodied soul (jiva)]. The five vital energies provide energy for the functioning of all these components. The subconscious mind contains various centres like the identification and interpretation centre, the give and take account centre, the desire and instinct centre, the like and dislike centre, the temperamental characteristic centre, etc.

1.1 As a therapy in psychiatric illnesses

Chanting proves to be beneficial in a majority of psychiatric illnesses. Chanting The Lord’s Name is perhaps one of the most effective modes of therapy in the treatment of ‘obsessive compulsive neurosis’.

‘Introversion and introspection are both quite necessary for the development of positive qualities within oneself. The process of chanting favourably facilitates the development of both these factors. Chanting in the true sense is not really possible without becoming introverted. If one wishes to observe whether chanting is going on in the mind, it is essential to become introverted. The mind which wanders due to its inherent tendency does not concentrate on chanting for long. Once this is realised it has to be brought back to chanting. In this process of turning it back one becomes aware of the thoughts or defects which prompted the mind to wander. This itself is introspection.

1.3 Developing a liking for chanting and purification of the subconscious mind

According to psychology, chanting The Lord’s Name and that of a worldly object are both quite similar. When a mother utters or hears her son’s name several emotions such as motherly affection, happiness, worry, aspirations, etc. are generated in her subconscious mind. This is because all emotions associated with the name of the object, that is the son, coexist with it. The memory or hearing of that name, constantly activates them. One does not require effort to remember one’s son. It occurs automatically and constantly and becomes a powerful driving force of her life. Sometimes due to this very force a mother is prepared to sacrifice everything for her son. The psychological response in chanting The Lord’s Name too, is the same. Some emotion or image about The Lord is consciously or unconsciously present in the person chanting His Name. One also has some notion about His qualities. One knows from discussions that one is benefitted by The Lord’s grace and that chanting His Name is the tool to acquire it. Hence, the spiritual emotion (bhav) that one is chanting the Name of the One who has particular qualities accompanies the Name. Due to this very spiritual emotion, emotions such as respect, love and devotion for God, fear of wrong actions, etc. go on increasing progressively while emotions to the contrary go on diminishing. Thus gradual purification of the subconscious mind is achieved.’ (1)

1.4 Reduction of impressions in the intellect centre as well as the subconscious mind

1.6 The benefits are similar to those obtained in silence (moun)

Chanting The Lord’s Name is a type of silence (moun). Hence, the psychological benefits of observing silence as given below, also occur with chanting.

1.7 The physical benefits resulting from tranquility of the mind

When the mind remains peaceful with chanting, one is free from psychosomatic illnesses precipitated by stress and enjoys good health.

2. Benefits of chanting according to the science of Spirituality

If one has problems due to spiritual factors then chanting The Lord’s Name is useful as a spiritual remedy. For example, if an individual has a deficiency of vital energy (pranshakti) then chanting the Name of a superior deity like Shiva, Vishnu or Ganapati is recommended. Similarly, if one has problems due to ancestors’ subtle bodies then the Name of Lord Datta is advocated.

Now, to understand the relationship between the organs and the deities, do an experiment. First chant the word ‘Arka’ for a minute and note in which sense organs namely, the ears, skin, eyes, tongue and nose some sensation is felt. Only then read the following paragraph.

Thirty-one seekers attended a workshop on Spirituality. None of them knew the meaning of the word Arka. After chanting the word ‘Arka’ they experienced sensations in the various sense organs as follows: 19 seekers – in the eyes, 4 – in the ears, 4 – in the tongue, 3 – in the nose and 1 – on the skin. From this, one can deduce that there exists some relationship between the word Arka and the eyes. Arka is one of the Names of Surya (Sun deity). The Sun deity and the eyes both being associated with the tej (absolute fire) element, after chanting Arka, a majority of seekers felt the sensation in the eyes.

The following table illustrates the relationship of various organs to deities and also how the Name of a particular deity should be chanted to improve the function of a particular organ. The point to be noted here is that the specific chanting will be beneficial only if the function of an organ is impaired due to a spiritual factor, that is a reduction of vital energy (pranshakti) and not if the cause is physical or psychological.

Some deities can be chosen according to one’s desire as follows.

The complete spiritual practice is one that is compatible with the functioning of the body and the mind. Chanting The Lord’s Name is one such perfect spiritual practice. Hence, it is an excellent means of going towards the natural state of communion with God (sahajavastha).

To follow the Path of Knowledge one requires sharp intellect but ‘All the four classes can chant.There is none too small or great to do chanting. Even the weak and the downtrodden are able to overcome the Great Illusion with the help of The Lord’s Name’. – Shri Dasbodh (4.3.24)

‘Worldly talk diverts the speech from purification of the subconscious mind and makes it impure. To bring about its purification one should chant The Lord’s Name.’ – Saint Bhaktaraj

2.6 Development of an introverted attitude

This reduces the attachment to external objects.

2.7 Development of devotion and faith

The spiritual experiences that one gets from chanting, generate and strengthen devotion and faith.

2.8 Appeasement of the deities

The Shrimadbhagvadgita (9:22) quotes the following secret of devotion.

It means, ‘I take care of the worldly requirements of those who worship Me with devotion’. One remains engrossed in The Lord’s Name and He looks after one’s worldly and spiritual needs. This itself is called Rajayoga. No matter what anyone may say I term this itself as Rajayoga (the king of Yogas). In Shri Gurucharitra, the title ‘the rich one’ is bestowed by saints upon one who chants The Lord’s Name. Hence, the truly wealthy one is the one chanting The Lord’s Name.’ – H. H. Kane Maharaj

‘Chanting The Lord’s Name is one’s duty. One should chant with every breath to repay the debt to The Lord who has created us.’ – Saint Bhaktaraj

2.9 Chanting with and without worldly expectation and merits and sins

In any transaction despite meticulous efforts to minimize the ‘give and take account’, it is nearly impossible to conduct an accurate exchange. In short, a give and take account always persists. To avoid this it is essential that a non-action should take place.

Any action performed whilst chanting The Lord’s Name becomes a non-action (akarma karma), that is becomes devoid of a result. Thus one neither attains merits nor sins from it. Because of this action no new accumulated account (sanchit karma) is created. Consequently one finishes experiencing one’s destiny and liberation from the cycle of birth and death is hastened. On an average if one considers the accumulated account (sanchit karma) to consist of 100 units, then in one birth 6 units of these are experienced as destiny (prarabdha). Thus a man should attain Liberation in 16-17 births. But this does not happen as while undergoing those 6 units of destiny usually an average person does not chant The Lord’s Name or do any other spiritual practice. Besides due to wilful actions (kriyaman) the accumulated account increases by 10 units. Thus at the time of death the accumulated account becomes 104 units and one gets entangled in the cycle of birth and death. That is why a non-action should occur. Chanting of The Lord’s Name is one of the best means to achieve that end.

The practice of specific chanting enables one to acquire control over a particular element and accordingly some supernatural powers, for instance chanting of ‘Surya’ (the Sun deity) bestows control over the tej (absolute fire) element and subsequently one is not affected by heat.

2.13 Dissolution of the ego

‘Once one is adopted, in order to inherit the property of the foster parents, one has to forget one’s old name and replace it with a new one. Similarly, to acquire God’s grace one needs to forsake one’s ego and forgetting one’s own name, one has to replace it with His, (that is chant His Name). Thus, a seeker should get engrossed in chanting The Lord’s Name forgetting oneself and should blend with His Name.’ – Saint Bhaktaraj

2.15 Benefits even after death

‘The Lord’s Name is the most subtle of all objects in the gross dimension. “It” accompanies the subtle body at the time of death on its onward journey. For the seeker chanting The Lord’s Name there is no death but only union with The Lord’s Name. As the seeker keeps chanting, this is what eventually happens.’ – Saint Bhaktaraj