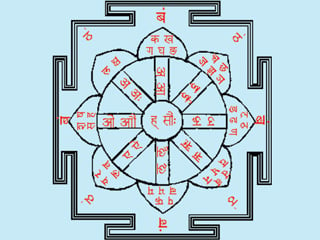 1. Origin and meaning of Path of Mantra (Mantrayoga)

Some definitions of the word mantra are as follows:

2. Parts of a mantra

The meaning: The letters or words in a mantra constitute its body and the Om at its beginning, is the head. If both the head and the body are present then with that mantra one’s aspirations are fulfilled.

Usually a mantra consists of the following:

The Name of the deity which is to be worshipped. Usually Shri or Om is prefixed to the deity’s Name. [Refer ‘Prefixing Shri or Om to the Name’.]

2.2 The favour asked for

Whatever is to be asked of the deity.

Pallav refers to the last or the decorative part of the mantra. Pallav also means to collect, the description of the benefit derived, etc. Often the ‘namaha’ in a mantra expresses salutation to the deity. That is the pallav. The words in the mantra are also known as pallav.

The meaning of some words which appear at the end of a mantra: ‘Often several words like namaha, svaha, svadha, vashat, voushat, hum and phat are joined to the bijas. These words either depict the mental state of a seeker at the time of chanting the mantra or whatever one wishes to achieve with their usage. Their implied meanings are as follows.

2.5 Parts of a mantra according to the science of Tantra

‘Every mantra includes three principles, the pranav, the bija, and the deity. The secrets of The Almighty within and beyond the universe are present in the pranav principle. Through the bija principle one becomes aware of one’s true nature (prakruti), the type of one’s relationship with The Almighty and the unmanifest energy within oneself which is making attempts to manifest itself. Knowledge of the deity principle gives one the realisation of The Lord’s wish which is to be fulfilled through oneself.’ (4)

Repetition of a mantra understanding its meaning, along with faith and spiritual emotion is called chanting a mantra (mantrajapa).

4.1 According to the holy texts

4.2 According to the meaning

4.3 According to the number of letters

A. The existing types

B. Types according to the Nitya Tantra

4.4 According to the gender

In the science of Tantra masculine and neuter mantras are called mantras while the feminine ones are known as vidya (knowledge).

‘The bija is the seedling of the mantra. It is from this seedling that shoots of the science of Mantra spread. The energy of any mantra lies in its bija. The chanting of a mantra is efficacious only if an appropriate bija is selected. The bijas activate the deity of the mantra. In this context the Bruhadgandharvatantra relates –

The meaning: O Parvati, I will tell you the divine nature of bijas. Mere pronunciation of a bijamantra, causes the manifestation of the deity at that site.

Bijas are also extremely useful from the physical and psychological point of view. When pronouncing bijas a particular frequency is generated leading to the production of specific sound waves. Spread of these waves activates certain centres and chakras in the body, which in turn facilitate the proper flow of the vital energies (pranas) through the channels (nadis). It is said that chanting of a bijamantra helps to achieve a healthy body, pure mind, increase in the mental (psychic) energy, sharp intellect, etc.

Mr. Woodrof has explained about bijas of various deities, their implied meaning and objectives in the following way:

Various combinations are created when bijas are combined. Two or more bijas can be combined. As a result, great diversity is created in the energy of the mantra for example,‘rhim shrim krim’ is a conjoined bijamantra. All the three bijas are various forms of the same energy – rhim = the Great Illusion (Maya), shrim = Lakshmi and krim = the deity Kali. According to the scriptures (Darshans) these three bijas represent creation, sustenance and destruction respectively. The Fetkarini Tantra gives the yogic meaning of some conjoined bijas, for example when rhim is joined twice it becomes a bija of coyness (lajjabija). This is considered to be the bija of the principle of entire creation. To illustrate this with an example, a legend states that at the time of creation of the universe The Creator felt coy for the first time. ‘Shrim’ means maintaining harmony between the functions of Lord Vishnu namely nurture and sustenance.’(6)

B. Types according to the motive

D. Bijamantras according to the Devnagari alphabets

* The first sound of all the four Vedas has created the bija im or aim.

Information about the association of the chakras with various organs and the appropriate bijamantras for them is given in ‘Science of Spirituality : Chapter 38 – Kundaliniyoga (Path of Activation of Spiritual Energy)’. The bijamantras purify the chakras and channels (nadis) and make the organs disease free.

2. Diseases of organs and bijamantras: The bijamantras which are useful in the diseases of certain organs are given below:

I. The three components (trigunas) and bijamantras: The bijas s, r and t correspond to the sattva, raja and tama components respectively.

‘This is a terminology from the Tantrik path. In all tantrik methods there is a tendency to consolidate the mantras into a single letter. The mantras which are consolidated using the Sanskrut letters shrim, rhim, klim, etc. are called bijakshars. Just as powerful subatomic particles are produced as a result of the disintegration of a substance so also it is believed that the bijakshar contains energy equivalent to millions of subatomic particles. In the science of Tantra, bijakshars are used to make a yantra, mantra or a tantra immensely powerful and mysterious. The Shabdasiddhanta of Mimansak advocates the concept of various presiding deities of the bijakshars and states that a bijakshar mantra is eternal. The meaning lies in the word, not in the one who understands it.

Writing bijakshars like shrim, rhim, klim, rhoum, svaha, etc. is an art in itself. Intense spiritual practice and the knowledge of control over the usage of words is essential to write, utter and put them into practice. Perhaps scripts of the perfected ones (siddhas) came into being only to be able to write down the bijakshars. Ten rules have been prescribed for writing them. The length and breadth of every bijakshar has special significance. Only by writing down a bijakshar is its mystery, purity and secrecy revealed. It is said that a mantra without the conjunction of bijakshars becomes devoid of meaning and power.’(8)