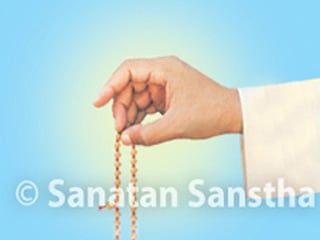 Is waking up at the auspicious time of the Brahmamuhurt, that is 3 a.m. and purifying oneself by bathing, taking a sattvik diet (rich in the sattva component), fasting, observing seclusion during menses, not touching others during worship, observing the rites of childbirth and mourning (soyar-sutak), going to temples, etc. all necessary for spiritual practice? The answer to this is that for those performing spiritual practice according to the stage of ritualistic worship (karmakand) these things are necessary but for those performing mental worship (upasanakand) that is chanting, which is at a higher level, these things are not at all necessary, as the benefit derived from them is very little and short lasting, for instance by going to the temple the sattva component is increased by 0.0001% for only 15 minutes, by touching a woman during her menses the raja component of the one touching her is raised by 0.0001% for just 15 minutes. As against this the sattva component of the one chanting, is raised by 5% during chanting. Hence these points have no value with respect to the one performing mental worship, that is continuous chanting.

The meaning: The four ritualistic sacrifices [namely Vaishvadev, Balikarma, Nityashraddha and offering food to guests (Atithibhojan)] do not match even the 16th grade of the sacrificial fire of chanting (japayadnya).

In this context, Lord Krushna (Shrimadbhagvadgita 10:25) says, “यज्ञानां जपयज्ञोऽस्‍मि ।” which means `Among the yadnyas I am the japayadnya. That is, the sacrificial fire of chanting is superior to them all.’

The table below compares the proportion of sins and merits in a sacrificial fire (yadnya) incorporating killing of living organisms and that in a dacoity.

4. Action (karma), chanting of The Lord’s Name and God

‘Rather than offering an action performed unto God, chanting whilst performing it is more appropriate. However considering that actions themselves are performed by God, that is due to God’s wish or that everything occurs on account of divine destiny is the best.’ – Saint Bhaktaraj

5. The results of action and chanting The Lord’s Name

When chanting is going on, ego is absent. The actions which take place then are only acts (kriya) as there is no intention in them. Hence one does not have to undergo the result of such actions. When chanting stops, ‘ego’ manifests and then the Law of Karma becomes applicable.

7. The thoughtless state and chanting

Instead of singing songs from movies, it is better to sing devotional songs as they have divine consciousness (chaitanya) in them. Among the devotional songs it is better to sing those written by saints as they contain a greater amount of divine consciousness. Even if this be true, they are composed of many words and notes. According to the fundamental principle in Spirituality one has to go from many to one and from one to the zero (null state) with one’s spiritual practice. Since there is only one word and one note in The Lord’s Name, it has more divine consciousness. Hence instead of devotional songs, chanting The Lord’s Name is more appropriate. The word bhajan originated from bhaj + n; ‘bhaj’ means devotion (bhakti) and ‘n’ signifies continuity. Thus its real meaning is continuous devotion.

9. Path of Knowledge (Dnyanyoga), Path of Action (Karmayoga), Path of Devotion (Bhaktiyoga) and Path of Chanting The Lord’s Name (Namasankirtanyoga)

If one wants to blend with Brahman, The Infinite Supreme God then one has to do continuous and infinite spiritual practice, that is for twenty-four hours. The study of the Vedas, Upanishads, etc. done according to the Path of Knowledge cannot be done constantly. Neither concentration (dharana), meditation (dhyan), tratak and pranayam according to the Path of Action nor the worship of God, singing devotional songs, devotional discourses (kirtans), undertaking pilgrimages, etc. according to the Path of Devotion can be performed for twenty-four hours. Besides worldly people have to undertake spiritual practice fulfilling all responsibilities such as looking after their home, children, profession, etc. With this background the continuity in spiritual practice, that is for twenty-four hours is possible only with chanting.

The meaning: The natural state of communion with God (sahajavastha) achieved by continuous chanting is the best form of spiritual practice. Concentration and meditation and moderate, contemplation on spiritual principles, that is Path of Knowledge is inferior and the Path of Mantra is still inferior with regard to spiritual practice.

10. The spiritual level of a seeker, spiritual practice and some of its effects

Points 1 – 4 are in relation to spiritual practice while 5 – 7 are its effects.

11. Relative importance of various spiritual practices with and without chanting

* Guruprapti = Acceptance of a seeker as disciple by Guru

From the above table one will realise why saints rebuke if one does service without chanting The Lord’s Name. As a disciple, Saint Bhaktaraj would not serve His Guru if His chanting was not going on, as He thought, “If chanting is not going on then one is impure and in such a state how can one serve the Guru?” A disciple of Bhaktaraj Maharaj served Him without chanting for nearly twenty years. Hence Maharaj made him chant in seclusion for one year, without speaking to anyone.

12. The importance of various types of spiritual practice in seekers of 40% spiritual level with reference to generation of spiritual emotion

* If service of the Absolute Truth is done along with chanting then 30% spiritual emotion is generated and consequently the proportion of other types of spiritual practices is reduced.

13. Path of Chanting The Lord’s Name (Namasankirtanyoga) and the Path of Guru’s Grace (Gurukrupayoga)

Obedience is doing only what one is told whereas service to the Guru implies perceiving what Guru would like and doing accordingly. Hence serving the Guru is superior to obeying His orders. Total sacrifice of one’s belongings is the greatest as thereafter there is no separate existence for a disciple.

14. The stance of a spectator (sakshibhav) and chanting The Lord’s Name

‘Instead of observing everything as a spectator, chanting The Lord’s Name is more important since in the stage of a spectator duality (dvait) persists whereas with chanting, the seeker can go towards non-duality (advait)’. – Saint Bhaktaraj

15. Realising that ‘everything occurs due to God’s wish’ (Ishvarechcha) and chanting while working

Experiencing that everything occurs due to God’s wish is more important than chanting while working.

16. The proportion of purification of various bodies with various paths of spiritual practice

The following points will be clear from the above table.

17. A gross comparison of the stages of progress in the various paths of Yoga recommended by the Guru or followed with one’s own intellect

* No rebirth after attaining this spiritual level.

* No rebirth after attaining this spiritual level.

Note : the word ‘Benefit’ used above in the articles is referred for ‘spiritual benefit’ and not for any type of material benefit.