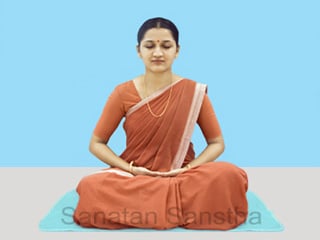 1. Deity of a forest (vanadevata)

Definition: This refers to a deity of a forest or a deity in the form of a forest.

Special features: It is said that this deity gets enraged and torments if it is not worshipped when crossing a forest or if one sings or whistles in its proximity.

Science behind the idol: These deities do not have specific idols like other deities. Branches of trees thrust into a heap of stones represent them.

Ritualistic worship: Tribals (adivasis) worship this deity in the form of stones and honour it by placing stones and branches of trees on it to prevent it from troubling them. A rooster, a billy goat or a piglet is offered as a sacrifice to it.

A. Definition and meaning: ‘Deities resembling spirits (pishach) dwelling in or around a reservoir of water or close to flowing water are referred to as deities of water. They are distinct from deities of water like Varun, Apadev, etc. They are seven in number.

B. Other Names: These seven deities of water are called “Sat Asara”. Asara is a corrupted form of the Sanskrut word apsara meaning celestial beauty. Apa (अप) means water (apa) and sru sar (सृ सर) means to play. Celestial beauties are women who play in water. The number of celestial beauties living in the clouds and indulging in play with water (jalakrida) as mentioned in the Vedas and the Purans is seven. It is the same according to the text Amarkosh as well.

Meaning: The seven celestial beauties quoted by the scholars are 1. Ghrutachi, 2. Menaka, 3. Rambha, 4. Urvashi, 5. Tilottama, 6. Sukeshi and 7. Manjughosha. The seven asaras are named: Machi (Matsyi), Kurmi, Karkati, Darduri, Jatupi, Somapa and Makari. In different places they are considered as the seven sisters or seven matrukas (deities).’(1)

D. Science behind the idols: Their idols are not found anywhere. Seven lines drawn on a stone or seven stones painted with sindhur (a saffron coloured powder) near a reservoir of water depict the seven asaras.

E. Ritualistic worship: To appease them they are offered an animal sacrifice. If a woman is possessed by them then seven married women (suvasinis) are offered a meal and an oti with coconuts and material for a blouse. (Some spirits like Khavis, Zhoting, Jakhin, Lav, Hadal and Bapadev are also associated with water.)

Deities in the form of the rivers Ganga, Yamuna and Narmada are given in ‘Science of Spirituality: Vol. 9 B – Divine Energy (Shakti)’.

3. Guardian deities of the entrance (dvarpal)

A. Definition and meaning: ‘Those who guard the entrance of a premise by standing at the door are guardian deities of the entrance. They come from a class similar to deities. They stand on either side of the main entrance of a big temple or a cave.

D. Science behind the idol: Its idol stands with the right foot held erectly on the svastik (an auspicious symbol), the left foot bent slightly and the hands held on the hips in a slightly bent posture. In some places these deities support the entrance (gopur) of the temple with their four hands. They have two arms, rarely four and wield a mace. Depending upon the deity of the temple whose entrance they guard like Shiva or Vishnu, they bear symbols of the respective deities. They have buck teeth and an ugly countenance. In temples of female deities instead of male guardian deities there are female ones (dvarpalika).’ (2)

The word family deity is used with reference to both the female (kuladevi) as well as the male deity (kuladev).

In Lord Krushna’s dynasty, the cowherds of the Satvat clan began the worship of Lord Krushna and since then He became their family deity. In the same way other male and female family deities came into existence. Since ancient times the tradition of worshipping the female family deity, the Guru and the founder of the family (mulpurush) has been handed down over the generations in some families.

Bahucharadevi: Once some women from the Charan community embarked on a journey. Bahuchara was their leader. On the way some lusty fishermen waylaid them and tried to outrage their modesty. Immediately Bahuchara removed her dagger and cut off both her breasts in one stroke. The next moment she dropped down dead. The same Bahuchara later became the family deity of the Charan community. Hundreds of such women from this community who have sacrificed their lives to preserve their chastity and honour have become their deities today.

A. When one falls ill one consults one’s family physician since he knows all about one’s constitution and illnesses. Similarly, when one has to get some work done in an office rather quickly, one contacts an acquaintance working there. In the same way, out of the thirty-three crores of deities one’s family deity is the closest, the one who will respond to one’s call and will uplift one spiritually.

B. When all the principles in the universe are imbibed into the subtle body, spiritual practice is said to be complete. Just as the cow is the only animal which has the ability to attract the frequencies of all the deities in the universe (that is why it is said that there are thirty-three crores of deities in a cow’s abdomen); so also chanting the Name of the family deity alone has the potential to attract all principles in the universe and increase them all upto 30%. Contrary to this, chanting of the Names of deities like Rama, Shankar, Ganapati, Lakshmi, etc. increases only that particular principle in which one is deficient. This is akin to taking vitamin A, B, etc. as a supplement to reduce the deficiency of that vitamin in the body. The Name of the family deity is like a general tonic which contains all the required minerals and vitamins.

C. Glory sung by saints: This is a verse in praise of the family deity sung by Saint Eknath.

4.6 Wrath of the family deity

At times, inspite of being intelligent when a student does not study, his teacher reprimands him. Akin to this, if a person has the potential to progress spiritually and yet does not undertake any spiritual practice then the family deity expresses its wrath. Since the individual is unable to perceive this, the deity creates obstacles in his worldly life. When he is unable to resolve them despite maximum efforts the individual seeks guidance from a saint who then recommends worship of the family deity. Once this worship is begun, the deity eliminates these obstacles and even facilitates his spiritual practice.

4.7 The Guru and the family deity

A. ‘A devotee’s sister was critically ill, yet was not breathing her last. So our Guru H.H. Bhaktaraj Maharaj told the devotee, “Your family deity is obstructing her death. Pray to it asking for her to be liberated. Then the deity will liberate her.” After the devotee prayed thus his sister soon passed away. Here the omnipotent Guru could very well induce death Himself, but He asked the devotee to pray to the family deity to make him realise its importance.’(3)

B. If a family deity troubles someone then Shri Malangshahababa of Mumbai tells that deity, ‘First grant him a vision in a dream and advise him to perform a particular ritual. Only if he does not comply then trouble him. Why do you trouble him straightaway?’

The founder of a family is known as the mulpurush of that family. For instance if a person from Maharashtra settles down in Indore and later dies there then four to five generations thereafter the family members of that person consider him as their founder. At times he is worshipped by them and included in their deities. At some places he is found in a crude form of stones or in the form of a metal plate. It is also customary in some families to offer food (naivedya) in the name of their founder person on a particular day.

If the founder of a family is not honoured by lighting a lamp, offering a monthly or annual meal according to family tradition, etc. then that family is neglected by him. That person laid down his life for the sake of the family and had earned wealth for it. When that wealth is squandered away he gets enraged and destroys that wealth completely.

‘मां तुरीयते इति ।’ means the one who eliminates obstacles which one encounters beyond the states of waking, dream and deep sleep till attainment of the superconscious (turya) state, that is the one who takes one till the turya state is the mother (mata).

According to ethnology: The custom of worshipping the mother began with the ancient matriarchal society.

Meaning: The queen (king’s wife), Guru’s wife (gurupatni), friend’s wife, mother-in-law and one’s own mother are all considered as mothers.

The following quotes expressing the importance of the mother are quite famous.

A. ‘रक्षति अपत्‍यं य: स पिता ।’ means the one who nurtures and protects one’s progeny is a father. The one who constantly gets the spiritual experience of God and guides others can be called a father in the true sense.

B. ‘तुरीयते पीयते यस्‍मिन्‌ रस: ।’ means the one who gives birth to sons and daughters providing them with the nectar within him to attain the superconscious (turya) state, is the father.

C. The one who teaches his children how to avoid hell and how to enter the region of ancestors (pitrulok) as suggested by ancestors is called the father deity.

Meaning: The father stands for Righteousness (Dharma). He is heaven itself and great penance too. If he is pleased then all the deities too are appeased. – Mahabharat Shantiparva 266.21

The father is called the first Guru because he imparts the Gayatri mantra. The mother is considered a deity, but not a Guru.

B. ‘यस्‍माद्‌ धर्ममाचिनोति स आचार्य: ।’ means a teacher is the one from whom a disciple learns Righteousness (Dharma).

Meaning: The Brahman (priest) who performs the rite of thread ceremony on a disciple and imparts the knowledge of the Vedas, rites of sacrificial fires (yadnyakarma) and the Upanishads to him is called a teacher. – Manusmruti 2.140

The teacher imparts education useful for worldly life, specially for the stage of the householder (gruhasthashram). His mission is like that of a school teacher or a professor.

Meaning: Kula means a group of students and pati means their guardian. An eminent Brahman who teaches ten thousand students, providing them with food, shelter, etc. is the head of a school.

Sometimes the word is used as a synonym for the family deity.

‘Before performing any important religious ritual or prior to any auspicious event to avert obstacles contemplation on some protector deities and their worship is done. Some of these deities are benevolent deities (ishtadevata). Just like family deities (kuladevata) they too are different for each family. Generally however deities which fulfill vows (navas) or are favourites are included among benevolent deities. The resolve (sankalpa) of every rite commences with offering obeisance to the benevolent deity as “ishtadevatabhyo namaha (इष्‍टदेवताभ्‍यो नम:)” Some rites are performed for benevolent deities annually.’(4)

Information on this is given in ‘Science of Spirituality: Vol. 1 C, chapter – 1 B, point – The stage of the householder (gruhasthashram)’.

10. The deity liberating from the bondage of the cycle of birth: The Guru as a deity (Gurudev)