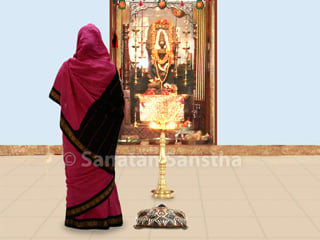 Some of the cursed but virtuous souls from the Bhuvalok (Nether region) are reborn on the earth as tortoises. Tortoise is next to the cow (amongst the non-human living beings) in possessing the ability to attract larger amount of sattvik waves from the atmosphere. Hence, the tortoise is more sattvik as compared to other living beings. 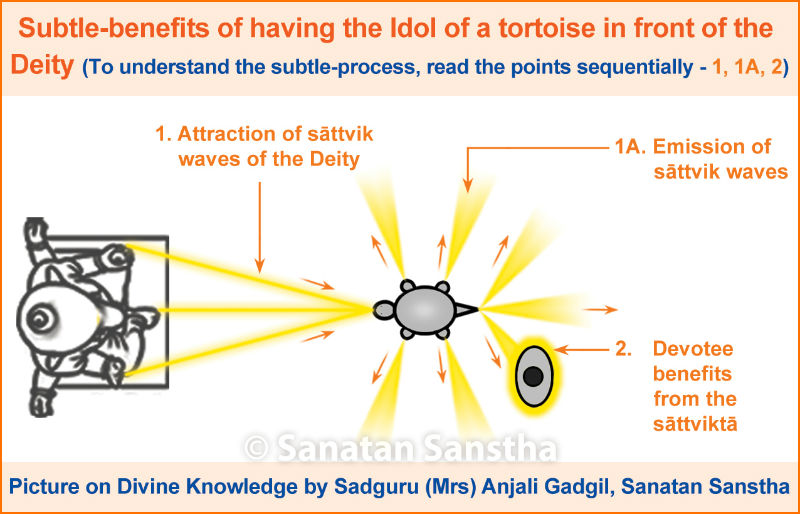 The sattvik waves emanating from the Deity’s Idol are absorbed through the mouth of the Idol of the tortoise and then emitted into the environment through its legs and the tail. Emission of the sattvik waves takes place mostly through the tail. Since these waves are projected into the environment by the tortoise only as per the need, a devotee does not receive them directly and thus does not suffer from any distress due to these waves. The important aspect to be noted here is that, though the waves emanating from the Deity are sattvik in nature, the spiritual level of an ordinary devotee is not high enough; as a result, he may suffer from distress. This is the reason why an ordinary devotee should not stand or sit in between the Deity’s Idol and the Idol of the tortoise while having darshan, but should stand on the side of the imaginary line joining the Idol of the tortoise with the Idol of Deity.

2. A devotee with a spiritual level of over 50%
should have darshan by being directly in front of the Deity

A devotee with a spiritual level of over 50% has the capacity to tolerate sattvik waves emanating from the Deity and hence, he is not affected by them. Such a devotee should have darshan by being directly in front of the Deity. This will help him imbibe the waves emanating from the Deity easily. During such a process, all the openings and seven chakras (Centres in the spiritual energy flow system, located in the subtle body) in the individual’s body are open subtly and Chaitanya (Divine consciousness) enters the body of the individual. 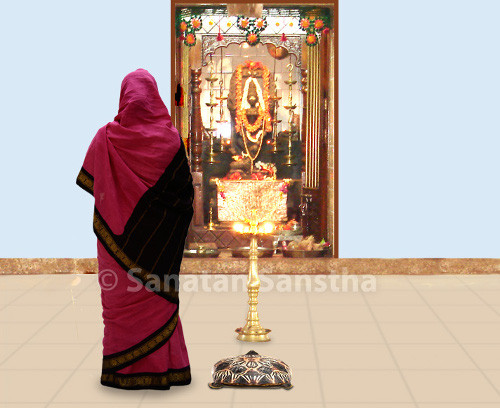 The cow is more sattvik than the tortoise because it has greater ability to attract the nirgun (Non-materialised) waves of God. The tortoise attracts larger proportion of sagun (Materialised) waves of the Deities. Also, a cow has greater capacity of retaining and emitting sattvik waves, as compared to the tortoise. The idol of the tortoise is installed in the Devalay in front of Deity’s Idol, so as to derive maximum benefit from the energy-form sagun waves of Deities. Nirgun waves are associated with the Nirakar (Without form) Principle of Deities and hence, a cow that can imbibe such waves, obviously, has greater sattvikta than the tortoise.