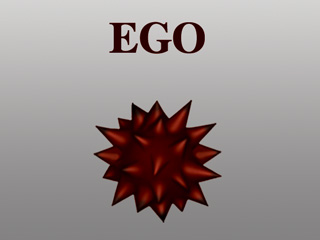 Almost every individual on earth has ego about something or the other; for example, about one’s work, knowledge, success, beauty, fame, sympathy one expresses, one’s family, caste, religious order, country, Deity of worship, spiritual practice, that is, whatever one is associated with. It is easy to make efforts to reduce the ego, if we know the reasons which lead to development of ego. This point elucidates the reasons due to which ego generally develops in worldly as well as spiritual life. 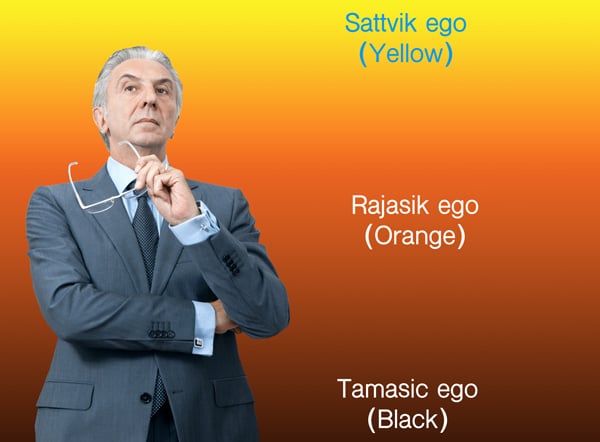 2 A. Commencement since birth

Every individual is born without a name. However, after naming him, he identifies himself with that name. He forgets that ‘I am Brahman (God Principle)’.

2 B. Due to sanskars (impressions) on the chitta (Subconscious mind)

Ego is generated due to temperament, desires, likes and dislikes and other sanskars on the chitta ; for example, when we say ‘I like sweet food items’, at that time we go away from the true ‘self’. Thus, the word vasana (Desire) can be split as – Vas meaning presence of God and na meaning devoid of. Thus, vasana is that which is devoid of the presence of God.

2 C. Due to wealth and desire for fame

Ego inflates when one acquires wealth, position, power, kingdom, etc. For example, Hiranyakashipu and Ravan became vain after acquiring kingdoms. Ego develops where there is an expectation of result.

2 D. Ego pertaining to the family

Having affection for one’s own children, relatives, home, etc. is also a type of ego. Some have ego even about being parents.

2 E. Ego due to intellect

Ravindra said, ‘Women are naive by nature; hence, they merely accept an incident to be Divine when they cannot explain it’. His wife retorted, ‘Men on the other hand have immense pride about their cleverness, intellect and knowledge. Hence, when they see a miracle that baffles their rationality and intellect, they do not accept it, so as to protect their bloated egos’.

2 E. Intellectuals and ignorance about Spirituality

Intellectuals make false propaganda that Spirituality, Deities, spiritual practice, ghosts, etc. are all fake. They label something as false without trying to understand or experience it, merely because it is not acceptable to them.

3 A. Ego due to intellect

Bhagwat is written for those who have the ego that they will not practice Bhakti (Devotion) until they are intellectually convinced about the importance of spiritual practice and the need for devotion.

Having the audacity to edit writings of Saints

When speaking about bhajans (Devotional songs) composed by His Holiness Bhaktaraj Maharaj, one of His devotees said to me (Dr. Jayant Athavale), ‘The wordings, etc. in His Holiness Baba’s bhajans are not correct. Let us edit them and print a revised version of the book’. Though the writings of a Saint may not be grammatically or musically correct, yet since they are inspired from within, that is, through the Paravani (Mode of speech of a seer where one experiences non-duality with God’s Name) and contain 100% Chaitanya, Changing the lyrics or musical composition means considering oneself to be greater than God Himself.

3 B. Ego about being knowledgeable

3 C. Ego about the religious order

‘Love one and all with no expectations whatsoever’, is what a true religion preaches. The message from all Saints too is the same. Yet, we do come across people performing sectarian spiritual practice, who consider their sect to be superior and look at the other sects with disdain.

A Sect is a group which accords importance to a specific aspect of a religion or religious order and behaves in accordance with it. The Hindu religion incorporates several sects, namely, Shaiva (Worshippers of Deity Shiva), Vaishnav (Worshippers of Shrivishnu), Shakta (Worshippers of Shakti [Divine Energy]), etc. Today, there are several more – Varkari, Brahmakumari, etc. The objective in the origin of all sects is the search for Sat (Absolute Truth), that is, God. However, today one finds that followers of a sect have ego about their Deity of worship, founder of the sect, teachings of the sect, etc.

After attaining a thoughtless state by performing spiritual practice for a few years, a seeker would consciously try to bring bad thoughts into his mind such as about sexual pleasure or that he is killing someone. However, these thoughts would not last more than a moment. After doing this for about 2 months, he developed an ego that he has now succeeded in his endeavour. That very moment, bad thoughts entered his mind, which could be eliminated only after making continuous efforts for five years. In short, five years of that seeker’s life were wasted.

3 F. Ego about having a Guru

When energy is generated from spiritual practice, intriguing miracles can be performed. These energies are called siddhis. The ego can get inflated upon acquiring such siddhis, for example, as it happened in the case of Ravan. Even if Saints use their siddhis as per the need of their mission, they do not develop ego.

(Radiance of a Brahman), and Shrikrushna destroying Deity Indra’s ego

When Brahmatej reduces, ego increases and one starts thinking that, ‘I am the doer of all worldly activities’; that is why, Shrikrushna lifted the Govardhan Mountain and eliminated Deity Indra’s ego.

3 I. Saints taking the suffering of others upon themselves

When a Saint takes the suffering of others upon Himself, He has some amount of ego.

3 J. Developing an ego that ‘I do not have any ego’

One can also develop an ego that ‘I do not have any ego’. Even a spiritually evolved individual can develop such a subtle-ego. When Saint Chokhamela prayed fervently, ‘The priests are asking me how come Deity Vithoba’s necklace is around your neck and thrashing me. What is my offence ?’, at that very moment He received enlightenment that even in asking ‘What is my offence ?’ there is subtle-ego; because, getting thrashed by priests, etc. is all a part of God’s leela (Divine play) itself. – His Holiness Bhaktaraj Maharaj