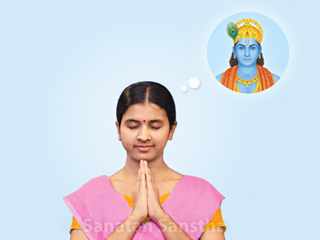 1. Being aware that the body is not ours, but belongs to God 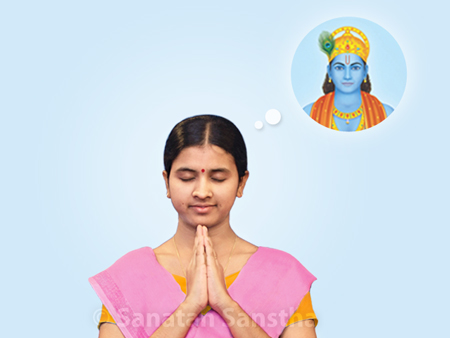 Considering yourself to be the body is the greatest mistake. The second mistake is to love the body considering it to be your own. Still greater mistake is to nurture the qualities of the body, that is, desires and instincts. Once these defects develop, then instead of curbing their development we get carried away under their influence, and on occasions we even forsake our intellect. If we have to cut a tree, then first we will have to hack its branches and then its trunk. Similarly, if we want to perform spiritual practice, we will have to curb the desires of the body (akin to cutting the Branches of the tree).

2. Instead of having a bhav

that ‘God is mine’, thinking that ‘I belong to God’

3. Having an awareness that everything belongs to God

God is the creator of the universe. He is omnipotent, omniscient and omnipresent. Without His permission, we can neither speak nor remain silent. We can neither renounce our body nor remain alive. Without His wish, not even a leaf can stir. Hence, we should have an awareness that everything in the world (including all that we consider be our own) belongs to Him alone. Then we will not feel self-righteous of our possessions.

4. Having an awareness that God is everywhere

If we live our life constantly with the awareness that God Is everywhere, it will help reduce thoughts about the self and enhance bhav towards God .

considering that God Himself does everything

Once Shri Gurudev Ranade received an invitation on the following lines – ‘We are going to celebrate the saptaha (A seven day series of lectures on Shrimadbhagawad) from the new-moon day. You are requested to attend the function.’ Upon reading this, Gurudev said, “What is the meaning of we are going to celebrate? We should say, it is going to take place”.

We should perform actions ourselves, but have a bhav that what has happened, what is happening and what will happen, all belongs to God and for my welfare. God is getting the action done through me. We should not say that I performed an action, since then ‘I’ is separated from God. While imparting information on Spirituality, we should not feel bad if people do not listen to us or do not accept it. Also, we should not feel proud if they listen to us. We should constantly have a bhav that whatever happens, happens because of God’s wish.

6. How to reduce ego by surrendering completely unto God

Mahabharat has the following incident. Pandavs lose a game of dice to the Kouravs. Duryodhan asks Dushasan to bring Droupadi (wife of the Pandavs) into the royal court and disrobe her. Droupadi begins to pray to Shrikrushṇa. Finally, Shrikrushṇa comes to her rescue and provides her with clothes and protects her modesty. Then Droupadi asks Shrikrushṇa, ‘Why Did you take so long to come?’ Shrikrushṇa replies, ‘So long as you clutched to your clothes, you had the hope that you would be able to protect your modesty. However, when you realized that you cannot protect yourself and you surrendered yourself completely unto Me, only then did I come to your rescue’.

The word prarthana is derived from the words pra (प्र) + artha (अर्थ) , which means pleading fervently. Praying earnestly to God with humility for something is known as prarthana. (A Seeker who is blessed by a Guru, mostly prays to the Guru). When we pray to God for something, we express our helplessness; also, then doership does not rest with us, but rests with God. Since the Guru or God says, ‘So Be it – तथास्तु’, not only do we get the desired benefit from the prayer, but a bhav develops that the Guru or God gets the task done. Hence, ego about the task is not generated.

For the fulfillment of any task, prayers alone are not sufficient; instead, we should make efforts with the prayers, since God offers assistance according to the proverb, ‘प्रयत्नान्त परमेश्वर’, God can be achieved through effort. God does not help those who do not have an attitude of making efforts.

God is the Creator of the entire creation. We are a part of this Creation. Hence, having awareness of God or of one of His forms, wherever and whenever the thought of ‘I’ and / or the world arises in the mind, and attributing even this awareness to God is known as gratitude.

Another meaning of the word ‘prayer’ is surrender, and the process of surrender is not complete without expressing gratitude.

By expressing gratitude, the doership is offered unto the Guru or God, and this helps reduce ego.

9. Having an awareness that

If the seeker constantly has an awareness that his spiritual progress takes place due to God’s grace alone since He Himself is the doer, then he does not develop ego about his spiritual practice.