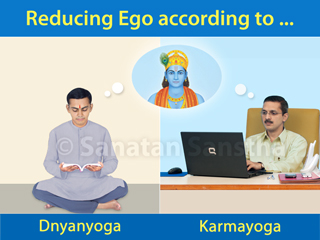 according to Karmayoga (Path of Action) 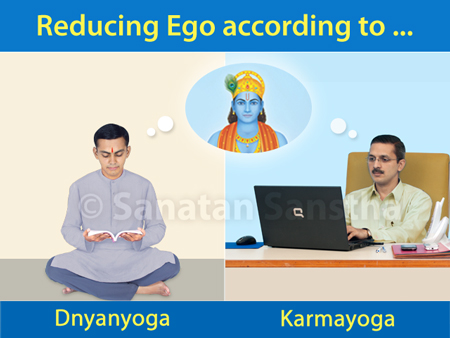 Man has immense ego about his name, position, achievements, etc. When we begin to perform actions as per the wishes of others or to obey what we are told, then our ego reduction gradually begins. The way seekers (who stay in the Ashram of a Saint or Guru) lead their daily lives, is not out of any desire to stay in unfavourable circumstances or lead a simple life; their sole objective in this is to reduce this ego – the false vanity that ‘I am someone’, which is deeply ingrained in man. Therefore, leading an Ashram life is of utmost importance in Spirituality.

according to Dnyanyoga (Path of Knowledge)

2 A. Thinking that unhappiness due to the body and mind is not ‘mine’

Each of us feels that unhappiness experienced by the other is mild (when compared with ours). Hence, when we begin to think that ‘my’ unhappiness (that of the body and mind) is not ‘mine’, then we neither feel happy nor unhappy. When happiness, unhappiness, desires and temperamental characteristics are eliminated in this way, ego too gets dissolved.

Refraining from using words such as ‘I’, ‘mine’ or if required referring to the self in third person as ‘he’, ‘his’, ‘the Guru’s’, etc. helps reduce the feeling of ‘I’ – ness.

2 C. Comparing our self with the vastness of the universe

2 D. Thinking of our self in relation to time

Time is eternal and infinite. When we think of ourselves in the context of this time, then we realise how small we are. Hence, pronouncing the time and place and making a resolve during the worship of a Deity is done with reference to the time as given ahead.

Thinking that the body is owned by time

An individual built a new house and went to stay there. He kept a paying guest for company. However, after a few days, the paying guest began to behave as if it were his own house. His haughty behavior subjected the owner to a great deal of distress, and hence, he narrated this fact to Shri Maharaj. Shri Maharaj said, ‘It is not appropriate that the paying guest behave as if he were the owner. He is committing a grave mistake by doing so. You should certainly take legal action against him. However, if you too are committing the same mistake, then you have no right to be angry with him. Each one’s body is owned by time, and time alone is its true master. When we do not own the body, it is incorrect to believe as if we are its owner’.

2 E. Learning to perceive Brahman (God Principle) in every thing

2 F. Becoming flawless and devoid of ego enables merging with the Almighty

Shri Ramachandra sent Angad to Ravan for a compromise. Ravan looked at him with disdain, insulted him and boasted of his own self.  Angad said, “O Ravan, you have narrated your stories of valour and greatness. I will accept your greatness only if any of you lift my foot that I have placed on the ground”. Everyone tried, but none could lift his foot. Then, Ravan Himself tried to lift Angad’s foot. However, he too did not succeed. Since Ravan had ego, his strength was limited to himself. In contrast, Angad was without any personality defects and ego. He remembered Shriram in His magnificent form and chanted His Name. As a result, Angad became one with this magnificent form (of Shriram). He became the Earth himself. Hence, a brave and mighty king of the stature of Ravan became powerless before him.