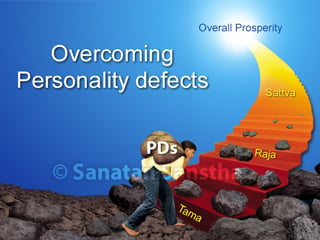 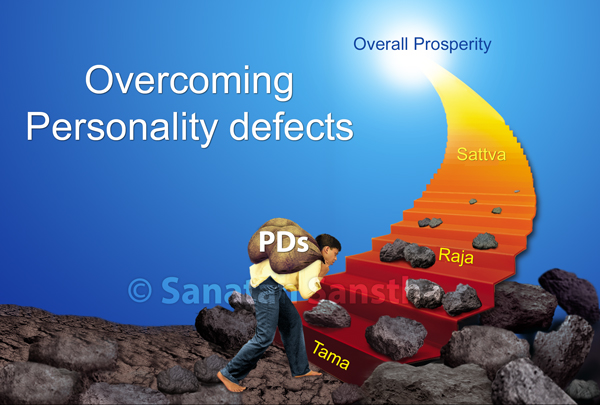 Very often one notices only the mistakes committed by others or their defects. Considering others to be at fault means not being able to perceive the Brahman (God Principle) in them. Instead of paying attention to other’s faults or defects, paying attention to their good qualities proves to be beneficial from the perspective of spiritual practice.

We should convert our defects into thoughts or actions related to spiritual practice or God. This point will be understood from the following example. If someone is short tempered, then when angry he should think, ‘God has given me the opportunity to perform spiritual practice so as to obtain Anand (Bliss). By getting angry why should I waste this moment of Anand imparted by God? Then, what will be the difference between me and those not performing spiritual practice?’ On the contrary, we should be angry with our self, thinking that ‘So long as I was angry, I forgot God ’.

Even if the defects in personality manifest, we should not think about it and feel sad; for example, if we get angry with someone while performing a task, then we should not feel unhappy thinking ‘why did I get angry?’ On the contrary, we should express gratitude towards God for creating an incident that caused our defects to manifest so that we learn from it and immediately forget the incident and learn to remain in the present. As the impressions in the like and dislike, instinct and desire and temperamental characteristic centres go on reducing, ego too gradually reduces. One of the ways to reduce impressions in these centres is to give autosuggestions. If an individual is making efforts to remove his / her personality defects, it helps in destruction of ego associated with the personality defects. For complete destruction of ego, in addition to the process of personality defects removal, other efforts have to be made consistently.

2. Attitude of accepting our mistake

Since Man is not perfect like God is, he is bound to commit mistakes. Each one of us makes mistakes at some time or the other in varying degrees. However, seekers are often not ready to accept their mistakes due to their ego. Not accepting faults amounts to nurturing the ego; whereas, saying, ‘I made a mistake’ is an attempt to reduce ego problem. In the first stage, we should learn to accept our faults, while in the second stage, we should pray for forgiveness (from God) and from the one in whose context the mistake has taken place . This helps in further ego reduction.

3. For destroying inferiority complex, ego and fear, purity of the body is necessary

With this thought – ‘No less than the sustainer of the universe (God) is with me’ – inferiority complex in me will vanish.

With this thought – ‘God is supreme and omniscient, and I am a novice in comparison; in fact, I am completely ignorant’ – ego in me will vanish.

With this thought – ‘All others are my brothers. He who functions through their as well as my body is the same God. No one is superior or inferior in the court of God. He bestows His grace on all. He is sitting close to me, to ensure my spiritual upliftment’ – fear in me will vanish. For destroying my personality defects and demerits, my body should be pure.’

There is a proverb, विद्याविनयेनशोभते, which means a learned individual should be humble. When there is lack of humility, ego steps in and thus avidya (Nescience) is enhanced. However knowledgeable an individual may be, yet he cannot have knowledge like God has. Hence, this shortcoming should be overcome with humility, so that we obtain knowledge as much as God has. The more humble we are towards every individual and objects, the faster is our ego reduction.

5. Attitude of learning from others

instead of constantly teaching others

Learning constantly is a unique characteristic of human nature. However, as some people have forgotten this, they constantly try to teach others. As a result, they feel that they are superior, that others listen to them, and thus their ego gets inflated. As against this, where there is an attitude of learning one is aware of the ignorance within and where there is ignorance, there is no ego.

6. Having no expectation of praise

Having an expectation of praise is itself an indicator of ego. If We always have a bhav (Spiritual Emotion), that everything takes place due to the Guru’s or God’s wish, then the desire for praise does not develop. Also, if we are praised by someone and we convert it into learning something about spiritual practice, then the praise does not generate ego.

7. Not having any desire for respect

Feeling that ‘I should be respected’ amounts to nurturing ego.

8. Comparing our self with someone who is superior to us

There are two main reasons for destruction of the egoless state of childhood in adult life – knowledge and wealth. It is because of these, that the attitude ‘I know something and I am someone great’ develops. This attitude later proves to be harmful. Hence, we should compare our self with someone who is superior to us; for example, a singer should compare himself with someone who has greater expertise in singing, likewise, a seeker should compare himself with a seeker who is more evolved than himself. While comparing His devotion with that of the gopis, even Saint Kabir says,

Meaning : Why are you praising Kabir. Instead, go to the banks of river Yamuna and see for yourself. Lakhs of Kabirs will not be able to match the love that one gopi has (for Shrikrushṇa).

By playing with children, we forget our status at least to some extent.

10. How to reduce ego problem by not

saying anything about our self to others

When an Individual frequently speaks about his happiness and sorrow, developments in worldly life, etc. to others, his dehabuddhi (body awareness) is more. By not saying anything about our self to others, attachment to the body automatically reduces.

according to their wish instead of our own wish

Family members of some seekers do not perform any spiritual practice. Such seekers should not have a bhav that they are ‘seekers’ while interacting with the family members. Instead, they should consider themselves to be like any other member of the family. By thinking, ‘I am a seeker’, we consider our self different from others. This itself is a sign of ego.