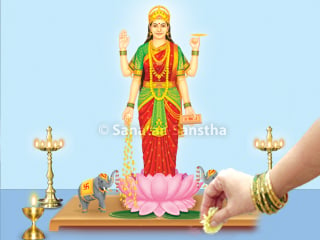 Lakshmi puja (3rd Day of Diwali) falls on the new moon day (Amavasya) of the dark fortnight of Ashwin. Generally, the new moon day is considered inauspicious; however, this day is an exception to the rule. Though this day is considered auspicious it is not so for all events, such as weddings, etc. On this day, worship of Goddess Lakshmi is done with the spiritual emotion (bhav) that She has provided us the wealth and in future too, She will give us the necessary wealth. In addition, Deity Kuber (treasurer of wealth) is also worshipped. This day ‘Laxmi-panchayatan’ enters the Universe. Shri Vishnu, Shri Indra, Shri Kuber, Shri Gajendra and Shri Laxmi are elements of this ‘panchayatan’ (a group of five). The tasks of these elements are:

Lakshmi     :     Divine Energy (Shakti) which provides energy to all the above activities.

A. Destruction of negative energies: On this particular day, Goddess Lakshmi’s destroyer (marak) form is active, since it is the new moon day. The spiritual emotion of the person doing Lakshmi puja activates Goddess Lakshmi’s marak form and destroys the negative frequencies in the environment.

B. Arrival of other Gods (Devtas): Lord Indra and other male deities also get drawn to the place of ritualistic worship and follow Goddess Lakshmi. Thus happiness, opulence, prosperity, stability and wealth is maintained in the premise (Vastu) by worshiping the 5 elements or Deities

How to do Lakshmi puja ?

1.  At the break of dawn, one should have an auspicious bath, and then worship the Deities.

2.  In the afternoon, a rite for the departed souls (parvanshraddha) and an offering of meals to  Brahmaṇs (Brahmaṇbhojan) is done.

3.  In the evening, in a decorated area, Goddess Lakshmi, Deity Vishnu, other Deities and Deity Kuber are worshipped. A legend says that on this day Deity Vishnu along with Goddess Lakshmi liberated all the Deities from Bali’s prison and thereafter they all slept in the ocean. To represent that, everyone should enjoy themselves at home and light lamps everywhere.

When ritualistically worshipping Goddess Lakshmi (Lakshmi puja), an idol of Lakshmi should be installed on a seat on which either an octapetalled lotus or a swastik is drawn with consecrated rice (akshata). Next to Her, an idol of Deity Kuber is placed on a pot (kalash). Then all these Deities including Lakshmi are offered a Naivedya (Holy food item), a mixture of coagulated cow’s milk (khava), sugar, cardamom and cloves. Then items like coriander, jaggery, corn obtained from parched, uncleaned rice, sugar candies (battase), etc. are offered to Goddess Lakshmi and then distributed to well-wishers and friends. Holding a bundle in the hand guidance is offered to ancestors. Brahmaṇs and the hungry are offered meals. One stays awake in the night.

The Puraṇa narrates that on the new moon night of Ashwin the Goddess Lakshmi goes everywhere in search of an ideal home. Though undoubtedly cleanliness, beauty and excellence attract Her yet She loves to live in a home inhabited by men who are faithful, dutiful, merciful, righteous, have control over passions and are devotees of God, and women who are virtuous and chaste.’

Just as the Deities Lakshmi and Deity Indra are worshipped on the religious festival of Kojagari, Goddess Lakshmi and Deity Kuberare worshipped on this new moon day. Lakshmi is the Deity of wealth but Deity Kuber is the treasurer. Several people possess the art of earning money but do not know how to save it. However saving money and spending it appropriately is far more important than earning it. Since most people do not know how to spend money, their spending is unwarranted and ultimately, they become bankrupt.

Kuber is the Deity who teaches the art of saving money as He Himself is the treasurer. Therefore, in this ritual the worship of Goddess Lakshmi and Deity Kuber has been recommended. Though all people celebrate this festival, the business community in particular does so with great enthusiasm and splendour.

Development of virtues gains importance only if in the process defects are overcome. Just as one makes efforts to acquire wealth (Lakshmi), poverty (alakshmi) should also be destroyed. To signify that, on this day a new broom is bought. It is called Lakshmi. At midnight one should sweep the house with that broom, accumulate the garbage in a dust pan and throw it out. This is called ‘driving off’ of alakshmi (garbage – poverty). Sweeping the house and throwing the garbage out at night is forbidden on other days. When removing the garbage alakshmi is driven out even by sound created by striking a sifting pan and an earthen vessel covered with a hide.

Goddess Lakshmī means wealth, prosperity while alakshmi means poverty, misfortune. Development of virtues gains importance only if one overcomes defects. Just as one makes efforts to acquire wealth (Lakshmi), poverty (alakshmi) should also be destroyed. On the third day of Diwāli, in the evening, Goddess Lakshmi is worshipped and this is called as Lakshmipujan. At midnight, the act of driving out alakshmi is done as given below –

1.  A new broom is bought for this act and it is considered as ‘Lakshmi’.

2.  It is ritualistically worshipped at midnight and then, the entire house is swept using the new broom.

3. The rubbish is collected in the dustpan and it is taken out of house. It is recommended to take it out through the backdoor; however, if there is only one door, then one can take it out from that door.

5. At the end, express gratitude to Goddess Lakshmi and from next day onwards, start using the new broom daily for sweeping the floor.

a. On any other days, sweeping and throwing out the rubbish at night is not recommended.

b.  If one lives in a fully carpeted house, they can buy new broom and sweep over the carpet and follow as given in point 3 and 4 above.

Spiritual effect of the act of driving out Alakshmi

1. Rubbish represents alakshmi. At midnight, the subtle components Raja and Tama are maximum.

2. The rubbish being Raja-Rama predominant, the Raja-Tama components in the atmosphere are drawn towards it.

4. Earlier in the evening, due to performing the Lakshmipujan, the Chaitanya (Divine Consciousness) spreads in the house.

5. In Purāna, it is said that at midnight, Goddess Lakshmi searches for an ideal house. No doubt the cleanliness and beauty draws Her attention; however, She chooses to live in a house in which faithful, dutiful, merciful, righteous men live, who have control over passions and are devotees of God, and women who are virtuous and chaste.