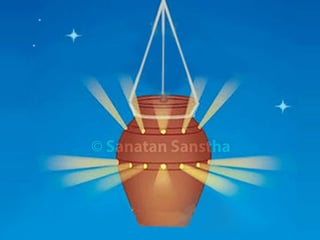 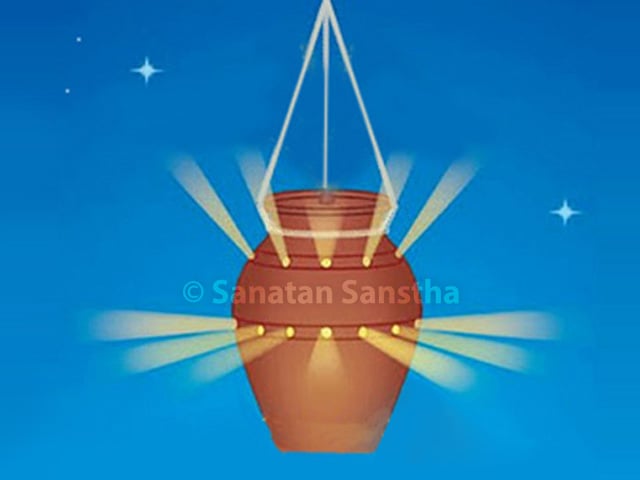 The original word for ‘Akash kandil’ is ‘Akashdeep’. Nowadays, ‘ghee-lamp’ has been replaced by an electric lamp; therefore, it is called ‘Akash kandil’. The atmosphere around the house is purified due to hanging Akash kandil outside the main door of house . Its another form that is hung inside the ‘vaastu’ (house) is known as ‘Laaman-Diva’.

1. History of Akash kandil or Akashdeep

The concept of ‘Akashdeep’ originated during ‘Tretayuga’. People expressed their joy by hanging ‘Akashdeep’ to welcome the atmosphere which had purified with the ‘chaitanya (divine consciousness)’ of Shrirama at the time of His coronation ceremony.

2. Design of Akash kandil or Akashdeep

The original shape of ‘Akashdeep’ is like a pot (kalash). It is mainly made of clay. It has circular holes in the centre and on upper side at a distance of 1-2 inches on the circumference of the pot. Inside the pot, clay seat is made to keep ghee-lamp.

‘Akashdeep’ is hung outside the main door on right hand side (looking from inside the house) (Right side is a symbol of activated energy). At twilight, akshata (Unbroken rice grains, usually smeared with kumkum) are kept on clay seat inside the pot on which the ghee-lamp is placed. A clay cover with pointed top is placed over the pot.

during the coronation ceremony of Shrirama in Tretayuga

In the darkness of night, one is unable to see clay ‘Akashdeep’ or “Akash kandil” but the lamp which is lit inside the ‘kalash’ emits light through the row of holes and it looks as if every hole is a flame of lamp, therefore, ‘Akashdeep’ or Akash kandil appears to be a cluster of flames in the shape of ‘kalash’. The halo is faintly spread around the ‘Kalash’ and it looks very attractive as if a flow of light is gushing outside the ‘kalash’. The ‘Akashdeep’ or ‘Akash kandil’ hung in the courtyards at the time of coronation of Shriram in ‘Tretayuga’ was therefore named as ‘Jyotikalash.’

5 A. Frequencies of water coming in the house from underground/ hell are stopped by frequencies of ‘Teja /Fire’ Tattva in Akash kandil hung outside the house

During the period of Diwali, frequencies which are downward in nature and associated with frequencies of Water (Aap)- Principle (Tattva) start getting transmitted in upward direction. It causes heaviness in the atmosphere increasing negative components in the house which pollute the whole ‘vaastu’. Akash kandil is, therefore, hung even before start of Diwali to stop such pollution. Akash kandil has ‘Teja (Fire)’ Principle (Tattva); so waves getting activated from upward and which have water-tattva get controlled by waves of ‘Tej’ Tattva; therefore, waves of Water Principle which are active from upward, are brought under control and the waves of Tej Tattva, creating awakening, start moving around the house in circular manner; therefore, Akash kandil is hung outside house.

5 B. Getting benefit of ‘Lakshmi Tattva’ and ‘Pancha- Tattva’ which are moving in Universe, through Akash kandil

Principle of Sri Lakshmi is active during the period of Diwali for removal of negative components in Universe. For getting benefit of this Tattva, all layers of ‘Pancha-Tattva’ are brought together which are absorbed through the magnetism created by speedy movement of ‘Vayu-Tattva’ in the vacuum of sky; therefore, ‘Akash kandil’ is hung outside house on top. It helps Principles moving in Universe.

6. ‘Akash kandil’s’ in different shapes and different types of frequencies emitted through them

6 A. Akash Kandil in star-shape

Frequencies emitted from this kandeel are not steady and have 10 % distressing energies. A person looking at such kandeel, transmits distressing energy through centre towards the upward direction which gets attracted from Hell and further transmits in atmosphere on the strength of its own shape. It creates a subtle line in the atmosphere.

6 B. Akash Kandil in hexagonal shape

From this type of kandeel, circular frequencies are constantly transmitted which have 15 % distressing energy and it pollutes all 4 sides of the ‘vaastu’.

In all such types of kandeels, the ‘Akar -negative energy’ create black covering in which 10 % black energy is stored. It pollutes ‘Akar-world’ in gross and subtle forms, charged with ‘Raja/Tama’ and emitting black energy. – A scholar (Thro’ the medium of Shri. Nishad Deshmukh, 15.10.2006, at 10.41 p.m.)