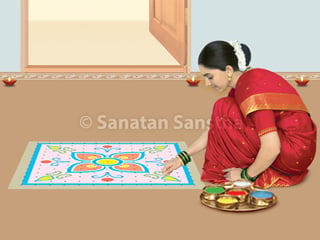 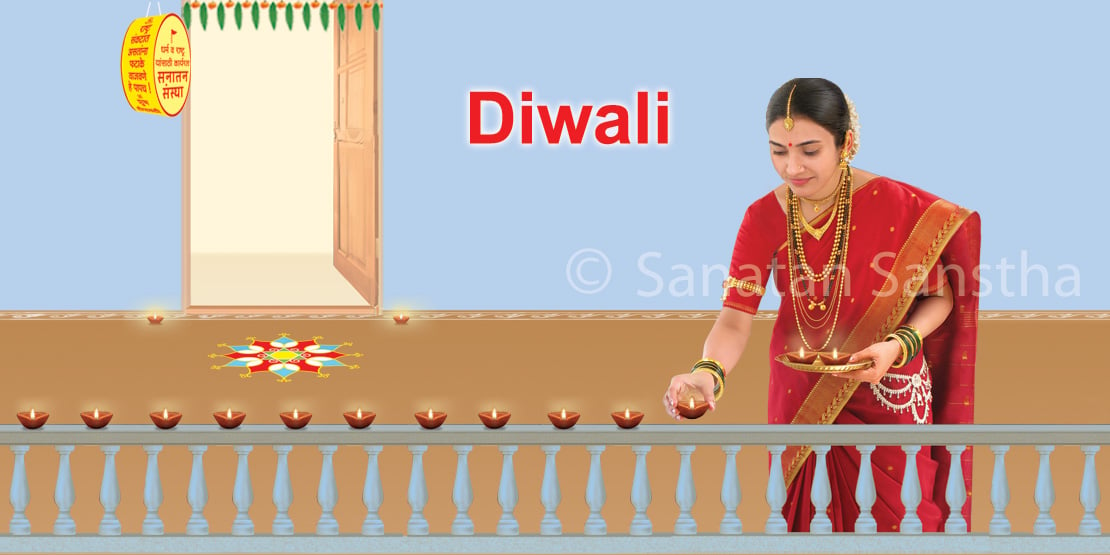 The word Diwali is made of two words; deep (lamp or diyas) & avali (row), which means a line or a row of lamps. During the Diwali festival,  lamps are lit in every home, office, etc. that is why this festival is also known as the ‘Festival of Lights’. Diwali is also called as Deepavali.

Diwali festival is celebrated on four consecutive days – the thirteenth day (Dhanatrayodashi), the fourteenth day (Narak chaturdashi) and the new moon day (amavasya) [Lakshmipujan] of the dark fortnight of Ashvin and the first day of the bright fortnight of Kartik (Balipratipada). Some exclude the thirteenth and consider only the remaining three days as Diwali. Since Vasubaras and Bhaubij respectively precede and follow Diwali, they are included in it. However in reality they are separate holy festivals.

During the four months preceding Diwali (festival of lights), the Absolute fire principle (Tej tattva) is almost absent in the atmosphere. Due to this, the Demons (in the earlier Eras) used to dominate and trouble the people. In order to effectively counter the threats from Demons, Diwali, a worship based on the Absolute fire principle was celebrated. In other words, Diwali stands for the destruction of the distressing elements that dominate the environment. Every day of Diwali represents the conquest of good over evil, piousness over immorality and virtue over vice.

However, if people learn, appreciate and understand this spiritual context then all the ills in society; caused by spiritual ignorance, carnal and bad tendencies would reduce and even the dominance of immoral people over the pious masses will subside.

Therefore, igniting the flame of one’s soul with spiritual passion, by reducing all worldly attachments can be known as true “Diwali.” The increased power of piousness will lend happiness to everyone. This is possible by sacrificing our carnal pleasures without any expectations. The Upanishads have advised to seek pleasure in the reduction of that very pleasure itself!

O God, through this Diwali festival, please light the bright flame of doing every action without any expectations in our hearts.  We have surrendered ourselves unto you completely. Please give us the spiritually pure (Sattvik) intellect (sadbuddhi) and strength to spread these noble thoughts to everyone so that we can become like a single earthen lamp that ignites multiple lamps around it. Through this we would be graced to celebrate ‘Diwali’ in its truest purpose and spirit. I wish everybody a Blissful Diwali!”

This year various days of Diwali fall on :

When is Diwali festival celebrated?

1st Day of Diwali, Dhanatrayodashī (or Dhanteras): It falls on the 13th day of the dark fortnight of the Hindu lunar month Ashwin. Dhanteras is very important for people who do business as they worship their treasuries on this day, and Ayurvedic doctors (vaidyas) who worship Deity Dhanvantari on this day.

2nd Day of Diwali, Narakchaturdashī: It falls on the 14th day of the dark fortnight of the Hindu lunar month Ashwin. This day has been celebrated ever since Shrīkrushna slayed the evil demon Narakasur.

3rd Day of Diwali, Lakshmipūjan: It falls on the new moon day of the dark fortnight of the Hindu lunar month Ashwin. On this day, rituals worshipping Goddess Lakshmī (the Goddess of Wealth) are undertaken to drive off poverty (Alakshmi).

4th Day of Diwali, Balipratipadā: It falls on the 1st day of the bright fortnight of the Hindu lunar month Kārtik. It is celebrated to symbolise Deity Vishnu’s conquest over the demon king, Bali.

In addition to the above days, following festivals are also included as a part of Diwali –

Vasubaras (a celebration held in the honour of cows): It falls on the 12th day of the dark fortnight of the Hindu lunar month Ashwin. This is celebrated on one day before the 1st day of Diwali. On this day, cow is worshipped along with her calf.

Bhaubij or bhaidooj or Yamadwitiya (also called as bhai duj): It is celebrated on the 2nd day of the bright fortnight of the Hindu lunar month Kārtik and comes after the 4th day of Diwali. This festival is celebrated as a symbol of Divine bond of love between brother and sister. On this day, Shrīkrushna slayed the evil demon Shakatasur and liberated many women from the demon’s clutches.

However, in reality, the above two festivals are not part of Diwali (Festival of lights); but altogether different Holy festivals.