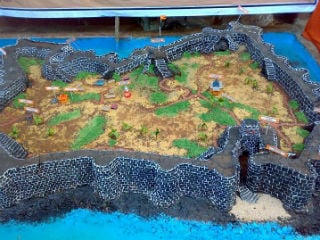 ‘Models of forts’ : Attention drawn to ‘Kshatra-vrutti’ (warrior attitude) exhibited by Shivaji Maharaj and impressing upon them the importance of Hindu Rashtra

The tradition of teaching children to build models of forts was started for creating awareness amongst them from childhood towards history of ‘Hindavi Swaraj’ established by Chhatrapati Shivaji Maharaj. Their attention was thus drawn to ‘Kshatra-vrutti’ (warrior attitude) exhibited by Shivaji Maharaj and impressing upon them the importance of Hindu Rashtra.

1. Spiritual concept behind forts ! – Physical body of a person is like a fort. His awareness towards own body is like a fort (Impressions on mind created in several past births and ‘Shadripus (six foes)’ cover the true form or awareness of self.) Forts are of different types. Some seem to be invincible whereas some seem to be vulnerable. In fact, every fort is penetrable and can be won. Similarly, to penetrate the fort of awareness towards physical body and fly the ‘Dharmapataka’ (Flag) of self-realization, i.e. knowing true self and be balanced, is the goal of human’s life.

2. Importance of forts from view-point of individual spiritual practice (Vyashti Sadhana) : The concept of building fort indicates ‘Sattva’ component winning over ‘Raja-Tama (6 foes and bad sanskars)’ and later to give up even ‘Sattva’ component and go beyond all qualities (become ‘Gunaateeta’). This is true ‘Hindutva’. It is necessary that today’s youth impresses upon self the ‘vyashti’ goal of establishment of ‘Hindavi (divine) Swaraj’ and prove the definition of Hindu as ‘Heenani gunani dooshayati, iti Hindu’ (One who rejects the negative / base qualities is a Hindu) to be true.

3. Importance of forts from the view-point of ‘Samashti’ ! : To defeat enemy, take over a fort controlled by
enemy; hoisting own flag which means to be free, to be rid of dependence. Dependence is like darkness and freedom is like light. Diwali is a festival that gives experience of winning over darkness and shows path of light.

4. Decorations of forts and its spiritual meanings :

4. A. Throne is a symbol of ‘Nirguna (formless)’ Brahma and a symbol of eternal power. King is a manifest form of Brahma. King, in manifest form, changes as per times; but throne remains the same. It is the symbol of original form (soul) of embodied soul and of physical (perishable body) form.

4. B. Chhatrapati Shivaji Maharaj sitting on throne is the symbol of the founder of Hindu Rashtra.

4. C. Power of righteous rule and guidance of evolved persons are necessary for any ruler to abide by his ‘Raaj-Dharma’ who takes his subjects on the path of spirituality i.e. towards ‘Sattva’ component destroying ‘Raja-Tama’; leading to establishment of ‘Hindavi Swaraj’ .