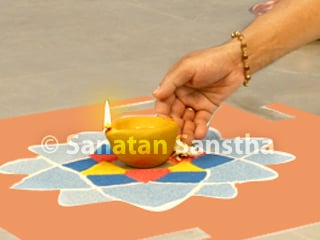 Dhanatrayodashi (or Dhanteras), first Day of Deepavali is celebrated in 3 different ways as described below

Dhan means that aspect due to which our life runs smoothly. Dhanteras is very important for business men, who worship their treasuries on this day. Their commercial year is from Diwali to next year’s Diwali. They consider this day to be a beginning of a new accounting year for their business. According to the Ayurveda, the birthday of the Deity Dhanvantari falls on this day. Āyurvēdic doctors (vaidyas) worship Him on this day. They give prāsad (Holy food item) of small pieces of neem leaves and sugar to the visitors. This has great significance because the neem fruit has originated from Divine Nectar (Amrut) and Dhanvantari is the Deity who bestows immortality. It is said that if one chews five to six neem leaves everyday then the likelihood of suffering from any disease is highly unlikely. One should pray to Deity Dhanvantari for the effectiveness of the medicine before taking medicines.

1. A few flowers of neem

Mix all the above ingredients in a bowl and add salt to taste. Then grind it till it becomes a soft paste. Then we offer it to God and pray with devotion that God partakes this Naivedya (food item offered to God). Once we have offered it to God we can distribute it to others. 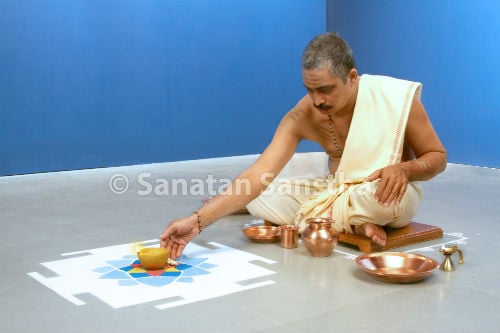 In the Dipavali period, offering of a lamp (dipadana) is done on the three days of Dhanatrayodashi, Narakachaturdashi and Yamadwitiya.

Deity Yama (Yamaraj, Deity of Death) is allotted the task of taking one’s life (praṇa) away at the destined time. One can never escape death. To prevent untimely death, the Deity of death Yamadharma is worshipped on the days of Dhantrayodashi, Narak Chaturdashi and Yamadwitiya. In the evening, an oil lamp (or thirteen oil lamps) made of wheat flour are lit. These lamps are kept outside the house with its flame facing southwards. Generally, a lit lamp’s flame is never kept facing southwards except on this day.

Meaning: By placing a lamp outside the house for Yamadeva in the evening of Trayodashi of the dark fortnight of Kartik, the untimely death is averted. Yamadev gave an assurance to his attendants that those who performed dipadana on Dhanatrayodashi will not suffer untimely death.