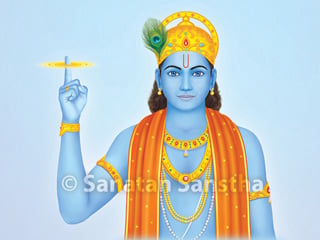 A powerful demon called Bhoumasur or Narkasur formerly ruled a place named Pragjyotishpur. He began harassing both Deities and the people. He imprisoned sixteen thousand young princesses with an intention of marrying them after winning their kingdoms in battles. He created chaos everywhere. When Shrīkrushṇa heard about this, He attacked the demon, slayed him and set the princesses free. This day is known as Narak Chaturdashi.

The dying Narkasur asked Shrīkrushṇa for a boon, “On this day (tithi) the one who takes an auspicious bath (mangalsnan) will not suffer in hell.” Shrīkrushṇa granted him the boon.

Consequently, the fourteenth (Chaturdashī) day of the dark fortnight of Āshwin also came to be known as Narak Chaturdashi and on that day people started bathing before sunrise. On this day when Shrīkrushṇa returned home at dawn, after slaying Narkasur, adorning a spot (tilak) of Narkasur’s blood on His forehead, Nanda gave Him an auspicious bath. The women expressed their joy by moving lit lamps around His face (ovalani).’

On this day, lighting lamps can destroy tamasik energies. The day before Chaudas, fourteenth day of the fortnight, after 12 a.m. the atmosphere starts getting polluted with raja-tama frequencies, because on this day the Universe moves from the Chandra-nadi (or the moon channel), into the Surya-nadi (or the Sun channel). This helps the tamasik energies in ‘Pataal’. The sound waves generated from ‘Pataal’ are created by heat generated from movement of particles loaded with raja-tama components. To neutralize the effect of these waves, one has to bathe early in the morning, light ghee lamps in earthen pots and ritualistically worship them. The lamps radiate waves of particles charged with the fire element, which helps to destroy the raja-tama laden particles in the environment. Due to this, raja-tama particles present in the cells of tamasik energies also melt away, which helps to destroy the protective sheath around the tamasik energies. Hence, a soul begins afresh to perform any auspicious activity. On this day tamasik energies get annihilated, in a way amounting to destruction of negative frequencies emanating from hell.

After abhyangasnân one should make an offering to Yamaraj to overcome untimely death (apamrutyu). This ritual of offering (tarpan) is explained in the religious almanac (panchāng). One should consult the religious almanac and then perform this ritual accordingly. Thereafter the mother moves lit lamps in front of her children’s faces (ovalani). Some break karit (a bitter fruit) with their toes to signify the slaying of Narkasur while some apply a little of its juice onto the tongue as his blood.

arati of her son and husband on Narak Chaturdashi

It is believed that offering meal to brahman on Naraka Chaturdashi means paying gratitude to God Who has appeared for religious mission through the medium of the brahman. Through this medium, the frequencies of Dharma spread in the Universe are nurtured. God is invoked to destroy the downward bound distressing frequencies.

There is practice that on Naraka Chaturdashi cloth is offered in the evening. Cloth is offered to invoke the frequencies of Deities to descend on Earth. Through this medium God is awakened to actually perform the task.

During Diwali lamps are offered to Deity Yama on Dhantrayodashi, Naraka Chaturdashi and Yamadwitiya. This protects the person from untimely death.

Pradoshkal means 72 minutes after sunset. To avoid going to Hell and for getting cleansed from sins, a lamp with four wicks should be lit in the ritualistic worship performed in pradoshkal and the following shloka should be recited:

Meaning: On this Chaturdashi day, for the appeasement of the Deity of Hell and for obliteration of all sins I offer this four faced, four wicks lamp.

For the destruction of the downward bound frequencies causing distress to society, ritualistically worshipping the destroyer form of God and paying gratitude unto Him is achieved through ritualistic worship of Shiva.

9. Importance of actions done on Narak Chaturdashi as per path of Devotion

This table clarifies why the various religious actions on Naraka Chaturdashi are prescribed.

10. Malpractices during the Narak Chaturdashi

1. An effigy of the demon Narkasur is made and burnt in public places. This creates lot of inconvenience to the general public.

2. No Scriptures have recommended burning of Narkasur’s effigy.

3. There is no mention of the Deity Krushna, in fact He is the One Who has slayed the demon Narkasur.

4. Some people block roads and forcefully extract money from the by passers.

5. The burning of Narkasur effigy leads to pollution. The iron, metals, nails used in the effigy create traffic hazards on the roads.

6. The vulgar dances to the pop / rock music have adverse impact on the society.

7. The youths, who are involved in this waste their precious time and money. They stay awake late at night and consume alcohol at night.