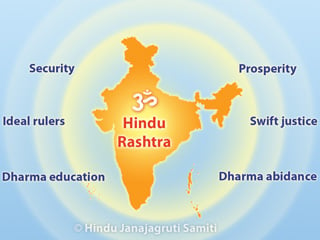 Through the medium of this article, we will have a clear picture of the Hindu Nation or Hindu Rashtra founded on Dharma, so that we can enthusiastically make greater efforts for its establishment !

1. Hindu Nation (Hindu Rashtra) from the perspective of governance

1A 1. The rulers will abide by Dharma, will be sattvik, virtuous, will look after public welfare, be selfless and shower fatherly love on people.

1A 2. They will make people abide by Dharma, seek guidance from Saints and have transparency in their conduct. Besides, they will also possess some important administrative virtues like love for justice, systematic, disciplined, ability to take decisions, alertness etc.

1A 3. They will not waste time in public meetings, inaugurations, party meetings, felicitation ceremonies etc.

The Hindu Nation will not have elections that have shortcomings such as vote-bank politics, reservations, violence, a candidate winning by getting most votes despite being rejected by over 50% electorate. People will direct a deserving citizen to look after the affairs of the State.

Decisions will be based not on the strength of majority, but on due consideration to appropriate and essential principles. They will have transparency. No issue will remain unresolved due to administrative lapses.

2. Hindu Nation from the perspective of justice

Judges will have knowledge of the subtle-dimension and hence, those affected will get prompt and appropriate justice. There will be no ‘Court of Law’ as in Democracy; instead, the Hindu Nation will have a ‘Court of Justice’.

All laws will take care of Hindu interests. Religious conversions will be banned. Therefore, no one will be able to convert people by deceit. Cow slaughter will be banned too. Minorities will not be appeased. There will be a ‘Common Civil Code’ in effect.

3. Hindu Nation from the perspective of administration

Policemen will be such that the citizens will look up to them for support. The Hindu Nation will have the Policemen with the virtues of devotion unto the Nation and unto Dharma.

Only those who love the Nation and Dharma will be included in the Government, Administration, Security Forces , Courts etc.

Hindu Nation will have no system of reservations. All caste or religion-based appointments made in Democracy will be retained, provided the appointees are found deserving; else, their appointments will be cancelled. Authorities will get promoted depending on their ability. Only those with virtues such as yearning, bhav (Spiritual emotion), priti (Spiritual love), leadership qualities and low ego will be promoted.

In the Hindu Nation, output of the administration will be evaluated on a daily basis. If the output is not up to the mark, the concerned people will either be suspended or be jailed for being a traitor to the Nation (Not working despite getting a salary).

4. Hindu Nation from the perspective of national security !

In the Hindu Nation, the borders of the Nation will be secured as the first step. Stringent laws will be passed to keep infiltrators in check.

The internal as well as external security of the Nation will be given priority. Two main enemies of the Nation – terrorism (External) and Naxalism (Internal) will be completely eliminated. Thus, citizens will be able to lead a secure life.

Article 370 and the likes that separate a State from the Nation by giving it a special status, will be abolished.

Every individual with physical and mental ability will have to serve in the security service at least for some time.

5. Hindu Nation from the economic perspective

Definition of modern day economics from the western world is – ‘A science that balances the unlimited demand and limited supply’. This definition itself suggests that demands of all people will not be met. According to the economics of the Hindu Nation, everyone will get whatever is necessary for him/her, effectively meaning, everyone will be happy. In short, the economy of Hindu Nation based on economics of Chanakya will fulfil the adages – ‘May all be free of distress’ and ‘For the benefit and happiness of the people.

Absence of black money & corruption and increased industriousness of people will make the national economy strong. Money obtained from the people will be utilised only for their welfare. Gambling areas like the Share Market and inflation will not exist in the Hindu Nation.

It is said that Bharat has the highest number of taxes in the world. According to Chanakya, when people have to pay taxes in excess of their expectations, they try to conceal their income, thus generating black money. Such a taxation system that causes economic exploitation of the people will not exist in the Hindu Nation. A taxation system based on Chanakya’s economics that collects taxes enough for the progress of the Nation will exist in the Hindu Nation.

Transparency will be maintained in every economic decision taken by the Government.

Industrialisation destroys simple life-style. The citizens feel the need for luxury. This encourages indulgence. The Hindu Nation will be based on Dharma. Therefore, it will keep industrialisation under control besides giving it appropriate direction. Hindu Dharma has advised individuals to the path of renunciation after a certain age. Following this path will automatically curtail materialistic enjoyments and production of related objects.

Native identity will be preserved in the Hindu Nation. Citizens will buy only indigenously manufactured objects. The life-style will centre around Dharma and not around material happiness. Therefore, production of gratifying objects will not be entertained.

Farmers will produce only those products which are Sattva-predominant, fulfil national needs and are conducive to national progress. The agriculture sector will have the sole aim of making Bharat self-sufficient in food and basic amenities.

The Hindu Nation will encourage globalisation, since the basic philosophy of Hindu Dharma is ‘वसुधैव कुटुंबकम्’ (Whole world is one family). This expansive concept will be actually followed in the Hindu Nation through business and thought process. Proclamation by the Bharatiya Sages, ‘कृण्वंतो विश्वमार्यम् ।’ that is, ‘Make the entire world Arya (Cultured)’ will be fulfilled.

6. Hindu Nation from the perspective of education

Education system started by Macaulay will be discarded and an ideal Gurukul system of education will be implemented. As a result, students will be self-sufficient, knowledgeable, will have self-respect, have love for their Nation, and will be rich in Atmashakti (Power of the soul) and Kshatratej (Radiance of a warrior).

Since Dharmashikshan (Education on Righteousness) will be commenced at the school level itself, it will make the future generations rich in virtues and moral values. Schools that will teach subjects from Hindu scriptures will be established. The Guru-disciple tradition will be revitalised.

The glorious history of ancient Bharat will be rewritten. History that is true, that which will awaken devotion unto the Nation and that which encourages inculcation of Kshatratej will be taught in schools.

Encouragement for art will not be merely from the perspective of the developing art, but will be a way of God-realisation.

School children will be given civil defence and military training from the beginning itself.

7. Hindu Nation from the perspective of language

7A. Pride in the mother tongue

Sanskrut, the language of Deities, is the mother of all languages and hence, it will be developed and conserved. It will be given the status of National language.

8. Hindu Nation from the perspective of culture

Music, television, sports, fairs, newspapers etc. will not be the means of only entertainment; but through these media, attention will be focused on intellectual development necessary for the progress of the society and the Nation.

8B. Names of public places and erection of statues

Names of political leaders given to roads and establishments, erection of their statues, names of roads and erection of statues that will be recognised only for 1-2 generations will not exist in the Hindu Nation. In their place, Names of Deities, Saints, Sages and indigenous authors such as Kalidas will be given to roads.

Every national day will be celebrated from the perspective of spiritual benefits. For example, ‘Teachers Day’ on Gurupournima, ‘Health Day’ on Dhanwantary Jayanti, ‘Arts Day’ on Mahashivaratri (Dance and music originated from Shiva) and ‘Justice Day’ on Yamadwitiya.

In the Hindu Nation, even National Awards will be spiritualised. For example, ‘Saraswati Award’ for literature, ‘Chhatrapati Shivaji Maharaj Award’ for bravery, ‘Shiva Award’ for music, ‘Kuber Award’ for economics, and ‘Vishwakarma Award’ for architecture.

9. Hindu Nation from the social perspective

Thieves, corrupt and criminals will be severely punished. Society’s well-being will depend on Dharma, not law. This will make the society ethical, virtuous, patriotic and law-abiding. Therefore, there will be no need to appoint Police or traffic-controllers at cross roads.

9B. Sense of duty

Citizens will not ask for their rights. Instead, they will fulfil their duties towards the Nation. Therefore, there will not be any strikes, protests, rallies etc.

The joint family system will be revitalised.

There will be no need for a family planning programme as the Veda, that is, Dharma mentions that there should be a single progeny. This has not been said because of shortage of food, but to instil control over the senses in the human being. Such progeny is called ‘Dharmaj’, that is, born of Dharma. Citizens in the Hindu Nation will be imparted Dharmashikshan and hence, they will slowly develop control over their senses and therefore, the population of the Nation will remain under control.

Adharma (Unrighteousness) alone is the root of all diseases. There will be enhancement in the health and life-span of people because they would abide by Dharma. People will be virtuous. Therefore, there will be no need for advertisements on awareness of AIDS.

Ayurveda will receive official status and will be nurtured.

Keeping in mind that the body is created from food, sattvik food will be encouraged.

10. Hindu Nation from the perspective of Dharma

All the components of society, profession, objects will be spiritualised. For example, during construction of houses and roads, care will be taken to create sattvikta, so much so that even dustbins of a house will also be sattvik.

O Hindus! Let us take an oath today to create a Hindu Nation founded on Dharma a reality !