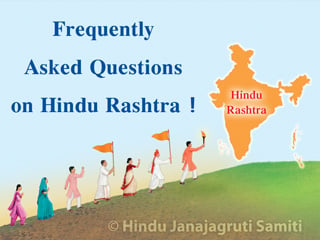 1. Why is establishment of the ‘Hindu Rashtra’ a necessity not just for Hindus, but for the whole of mankind ?

2. Why is it important to unite all Hindus and Hindu organizations to establish the Hindu Rashtra ?

3. What is the importance of holding National level Hindu Adhiveshan (Convention) ?

The Annual All India Hindu Adhiveshan organized by HJS plays a very important role. This Convention helps to display that unity of Hindus. It will help get rid of the feeling of isolation among the Hindu organisations, and they will become active for the protection of Dharma with the confidence that they are as united as the ‘Pandavs’. Finally, the objective of establishing the ‘Hindu Rashtra’ will be realised. But for this Convention, it would have been very difficult for these patriotic and devout Hindus to even meet each other.

4. What is the subtle importance and implication of the word ‘Hindu Rashtra’ ?

If someone thinks that the Hindus attending the Hindu Adhiveshan are doing so because of the appeal of one individual or the popularity of one organisation, they would be very mistaken. It is basically the Chaitanya in the term ‘Hindu Rashtra’ that has brought them to the Adhiveshan. Once the importance of Chaitanya is realised, no one can develop ego about accomplishing any task. Thus, an individual begins to perform the task and yet is devoid of ego. When this happens, he is blessed by God and the task becomes successful.

5. What is the association between Spirituality and Hindu Rashtra ?

A strong foundation of Spirituality is required in the rulers and subjects to establish the Hindu Rashtra. When majority of the population starts doing spiritual practice as per the basic principles it will result in an overall increase in the sattva component and reduction in the spiritual pollution (raja-tama) that is prevalent today. Everything in the Hindu Rashtra will be spiritualized, including various aspects like professions, objects including housing, roads and even dust-bins, etc.

6. What will be the characteristics of the rulers in the Hindu Rashtra ?

The rulers in Hindu Rashtra will be abiding by Dharma, they will be sattvik, striving for the welfare of their subjects, selfless and fatherly. They will make every effort to see that their subjects abide by Dharma. People will elect only appropriate and eligible representatives to rule the Nation. The state level decision will be taken by judging its appropriateness and need and not through majority votes. It will have transparency.

7. What will be the salient features in The Hindu Rashtra ?

Following will be the salient features in the Hindu Rashtra –

A. Subtle dimension will be included in the judicial process. The laws will take care of Hindu interests.

B. Religious conversions will be declared unlawful.

C. Policemen will be such that the subjects will look up to them for support. They will have virtues of devotion unto the Nation and Dharma.

D. There will be no reservations (backward class and minorities) for education or government jobs. All selections will be on open merit.

E. In the Hindu Rashtra, output of administration will be evaluated.

F. The borders of the Nation will be secure. Stringent laws will be passed to keep infiltrations in check. Separatist policies will be eliminated. The security of the citizens will be given priority.

G. The economy will be based on Kautilya’s economics. The taxes will not fleece the masses. Every decision will be transparent.

H. Indigenous products will be in use. The farmers will produce only those products that are conducive to National progress.

I. An ideal Gurukul system of education will be implemented. Dharmashikshan (Education on Righteousness) will be commenced at the school level itself to make the future generations rich in moral values. The glorious history of ancient Bharat will be rewritten. History that is true, that which will awaken devotion unto the Nation and Kshatratej will be taught in schools. Stress will be given on pride in native language and nurturing Sanskrut language.

J. Names of Deities, Saints, Sages will be given to the public places. ‘Teachers’ Day’ will be on Gurupaurnima, ‘Health Day’ on Dhanwantary Jayanti, ‘Arts Day’ on Mahashivaratri (Dance and music originated from Shiva) and ‘Justice Day’ on Yamadwitiya.

K. The pivotal point of societal well-being will be Dharma; not law. This will make the society ethical, virtuous, patriotic and law-abiding.

L. There will not be any strikes, protests, rallies etc.

M. Ayurveda will receive an official status and will be nurtured. Sattvik food will be promoted.

N. The temple management will be handed over to real devotees. The quality of the festivals and fairs of the Deities will be enhanced so that the devotees will get spiritual benefits.

8. Currently the condition of agriculture and farmers is pathetic. Will establishment of Hindu Rashtra improve their condition ?

For protecting the interests of farmers and self-sufficiency in food, a ‘Hindu Nation’ is necessary. The agricultural policy of Bharat is directionless, and hence, the agricultural sector has not progressed to the desired level despite the ‘Five Year Plans’. On the contrary, Bharat still has to import wheat. Farmers, who are the backbone of the agricultural sector, are getting burdened with loans and are in a very pathetic state. Agricultural produce such as sugarcane, cotton is not able to fetch appropriate prices; however, the middlemen are getting richer. Due to unjust practices, instead of ploughing their fields, farmers are on the roads agitating against injustice meted out to them and committing suicide. It is shameful that farmers commit suicides in a predominantly agricultural country. In our country, a farmer commits suicide every 12 hours. Between 1995 and 2011, 2,90,740 farmers committed suicides. The Hindu Rashtra will eliminate the corrupt administrators who prevent the farmers from benefitting from development schemes. O Farmers ! In the Hindu Rashtra, the yield will not be droughts and suicides; instead there will be happiness, contentment and Anand (Bliss)

9. How will corruption be eliminated in the Hindu Rashtra ?

In the ancient times, Bharatiyas abided by Dharma; hence, they were virtuous and ethical. In secular Democracy, this moral strength of the country has dwindled. As a result, citizens have become corrupt, and the entire country is unhappy. Today the entire system from top to bottom is corrupt. Politicians have looted the country through various scams. Receiving financial kickbacks for various contracts has become the norm. When Indira Gandhi was the Prime Minister of Bharat, she justified the corrupt practices of some Ministers in her Cabinet by declaring that corruption was a worldwide phenomenon. It is due to such rulers that corruption has not just gained political recognition, but public recognition as well. In every establishment (Government offices, hospitals, schools, universities, Police stations, Courts of law, etc.), no work can be done without giving a bribe at each level.

Hindu Rashtra is necessary to arrest the modern corrupt practices, which are a blot on cultured Bharat. We have to create a society that upholds moral values and also make politics corruption-free. Therefore, become active to establish the ‘Hindu Nation’ in which everyone, from a peon in a Gram Panchayat to a Minister in a Government, will not be able to even think of corruption !

10. Will women be safe in the Hindu Rashtra ?

In Ramrajya (Rule of Shriram, which also means the rule of righteousness), any woman could walk on a deserted road even at midnight. However, in the same Bharat, women are not safe. Therefore, there is no alternative to the establishment of the ‘Hindu Nation’, which will ensure security for its citizens.

11. How will the Hindu Rashtra deal with the growing menace of border disputes ?

Bharat has border disputes with nearly all the neighbouring countries including Pakistan, China and Bangladesh. While Bharat is surrounded by enemy countries from all sides, the rulers take no action to strengthen its armed forces. The Hindu Rashtra will be ready to defend from all perspectives. The Bharatiya soldiers will be fully equipped with necessary armaments and ammunition. As a result, the neighbouring countries will not dare attack Bharat !

12. Can establishment of Hindu Rashtra preserve the culture of Bharat and dispel the Western influence?

There is widespread invasion of western practices on the overall behaviour and thoughts, diet, hairstyle, clothing fashions of Hindus. As a result, the extent of immoral behaviour, addiction, unrighteous conducts, etc. in the Hindu society is on the rise. Rulers of all political parties do not have pride in Hindu culture. Cultural conversion of Hindus is a culmination of this lack of pride. Culture is truly the character of a Nation. Hindu culture is Sattva predominant; hence, it makes the Nation righteous and ideal. On the other hand, the western culture and lifestyle is Raja-Tama predominant; hence, it makes a citizen, and in turn the Nation unrighteous. Therefore, it is in their own interest that citizens distance themselves from western practices. Such acts by Bharatiyas amount to journeying back to cultural slavery. With the introduction of Spirituality and dharma in school curriculums this trend will change and Bharatiya Hindu culture will be re-established.

13. Hindus in Bharat are facing the problem of widespread religious conversions. Will the Hindu Rashtra be successful in preventing these conversions ?

Eight lakh Hindus are being converted annually through enticement, conspiracies, coercions etc. With ambitions to convert Bharat into an undivided Islamistan or to make Bharat a Christian Nation. Muslim clerics and Christians missionaries respectively are active in the country. Since the Bharatiya rulers completely lack pride in Dharma, there are no restrictions on these fanatical preachers. USA, Germany, UK, Italy and Netherlands are funding the activities of religious conversions in Bharat. Fanatics are making use of ‘Love Jihad’. They make Hindu girls fall in love with them; convert them to Islam so that their children are Muslims. Then they leave the girl and repeat the same process with another girl.

The Hindu Rashtra will pass strict laws to ban all religious conversions as well as put a stop to the cancer of ‘Love Jihad’.