Bursting crackers is a custom followed in other countries and it has no scientific base as per Hindu Dharma. Bursting of crackers also causes air and noise pollution on large scale; endangering people’s health and environment. Read more » 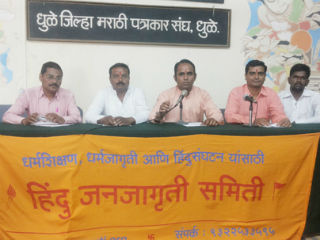 Shri. Pankaj Bagul of HJS said, “Hindus are wasting millions of rupees on bursting crackers which cause noise and air pollution; besides it can cause loss of life due to fire. Read more » Bursting of crackers is given lot of importance during celebration of Diwali festival but the noise and air pollution created by them is most dangerous for human health. Read more »

There is no reference to bursting of crackers in Hindu Dharma and it is a practice started by emulating other countries. Crackers cause lot of noise and air pollution and cause harm to people’s health and environment. Read more » Hindu Janajagruti Samiti (HJS) has been undertaking a drive, in lawful manner, from the year 2005 for prevention of desecration of Deities and great national leaders through their pictures printed on covering of crackers. Read more »

Hindu organisations in Tamil Nadu’s Virudhunagar have requested the district administration to ask fireworks manufacturers in Sivakasi to stop using pictures of gods and goddesses on firecrackers. Read more » 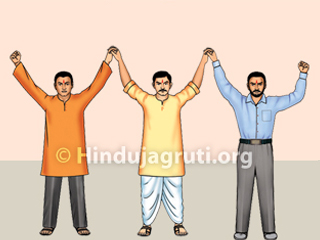 HJS created awareness amongst people of Delhi towards adverse effects of bursting crackers and denigration of Deities. Read more » Nowadays, it has become a practice to go on trips and how to enjoy during Diwali vacation ! Instead of enjoying such festival at home, performing ‘puja’ etc. O, Hindus’ Celebrate Deepavali in traditional manner, abide byDharma ! Read more »