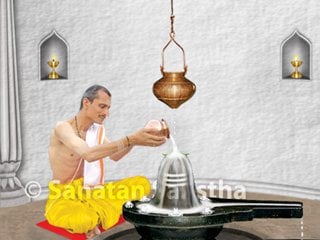 1. Vrats of the month of Shravan

Due to the vrats falling in the month of Shravan, benefits are acquired at an individual and social level. This explains the importance of vrats and our heads bow with devotion at the holy feet of the Sages who created these vrats.

‘Mangalagour’ is a Deity which bestows long life to the husband. This vrat, which consists of puja of the Deity Mangalagour, should be performed by a newly-wed woman. It is expected to be continued for five to seven years after marriage on every Tuesday in the month of Shravan. Puja of Lord Shiva and Lord Ganapati is performed along with Gouri in this vrat.

This vrat is observed on every Friday of the Hindu lunar Shravan month. The deity associated with this vrat is Jivantika, that is, Jivati Devi. This deity protects small children. In this vrat, on the first Friday of Shravan, women draw a picture of deity Jivati on the wall with sandalwood and worship it. Nowadays printed picture is worshipped. Five married women (suhagan) having children, are invited to the house and after applying turmeric and vermillion on their forehead milk, sugar and roasted grams are given to them as holy sacrament (prasad). On the last Friday of the bright fortnight (Shukla Paksha) of Shravan a vrat is observed, that is

In the ritual of this vrat, a metal pot (kalash) is placed and Sri Varadalakshmi is invoked into it. The Shrisukta is recited and the devi is worshipped. Thereafter a naivedya of 21 anarasas is offered to her. Thereafter, brahmin, married women (suhagans) and celibates (Brahmacharis) are offered upayan, that is, gifts.

In South Bharat, Varadalakshmi vrat is observed on the last Friday of the bright fortnight (Shukla Paksha) of the Ashadh month. People believe that in the temples of Tiruvadi, Tiruvayur and Tiruputtur, Goddess Lakshmi herself worshipped Lord Shiv. Therefore these temples have special significance for the observance of this vrat. Begetting a son, prosperity and obtaining wealth and grains are the fruits of observing this vrat.

Elderly women sing various songs sitting on the swing. They are called kajari. The women observing this vrat consume only one meal. In this vrat, some other old woman is paid obeisance by touching her feet and sugar candies (batases) are gifted to her. In her place dry fruits, sweets etc. are given to the woman observing the vrat.

The Amavasya in the month of Shravan is known as Pithori Amavasya. In this vrat, the sixty four Yoginis are worshipped. A fast is observed for the whole day of Shravan Amavasya.

On the day of Shravani, the presiding brahmin takes his seat after ablutions in the morning. A sacrificial fire pit is created for Utsarjan-karma (temporary giving up of the Vedas for earning a living) and a similar one for Upakarma (resuming learning of the Vedas). First a ring of Darbh (holy grass) is worn and along with uttering of the desh-kal, resolve (sankalp) is made.

It is clear from the above points that by purifying the body ritualistically in this way together with uttering of mantras, the mind also starts getting purified.

Worshipping the Sages and giving offerings (tarpan) to the Sages:

After this, by keeping the sacred thread on both the shoulders, offerings (tarpan) are given to the Sages.

Seven circles are created from the region of the Sages. These circles become one at the nirgun level to form a flow. This flow is emitted towards the Earth and is attracted at the place of the ritualistic worship of the Sages. Through this flow fountains of frequencies of Chaitanya spread in the environment. The people present there benefit from it.

With this one can understand how a person is benefited from the frequencies of the Divine Principle by wearing the sacred thread.