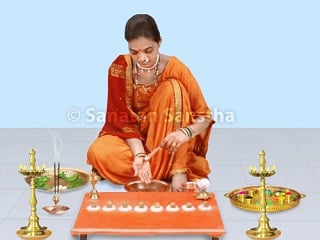 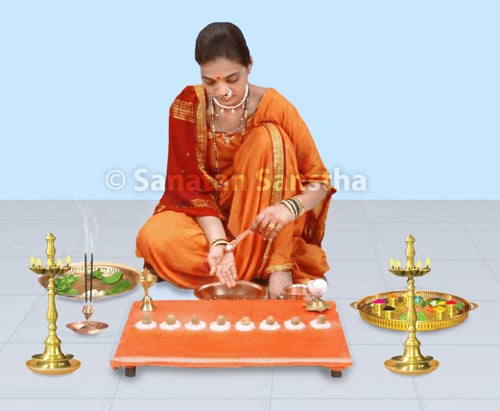 Bharat has a number of Holy and Religious festivals and traditions. However, most people view and celebrate them merely as age-old practices; they do not pay attention to the underlying science and their deeper meaning. If the underlying science of the Holy and Religious festivals is known, they can be celebrated with added faith. This article gives details about various types of vrats and their importance.

A. Sakām vrat : A vrat done to fulfill a specific desire is called a sakām vrat. The Purāṇs (The eighteen sacred Holy texts compiled by Sage Vyās) and Tantra (A branch of the Vēdās) texts give an account of different worships for fulfillment of different desires. Worship with expectation is an incidental worship and is undertaken only after choosing an auspicious moment and on a day of the week having anauspicious tithī (Lunar day).

The belief that, ‘The vrat of Satyanārāyaṇ and Satyadatta fulfill wishes faster’, makes many people undertake them. Thereby, the presiding Deity of that vrat gets appeased and one gets the benefit of the vrat.

Types of vrats done with expectation are given below.

2.Types of vrats – Regular and Incidental

A. Regular vrats: These are the duties to be performed according to the varṇa (Class) system. For instance, celibacy, pūjā (Ritualistic worship), sandhyā etc. should be performed everyday.

3.Types of vrats – According to the need

A. Most essential (penance) : These are vrats performed as penance. For instance, Kruchha, Ardhakruchha, Chandrayaṇ etc.

B. Essential (duty) : These are activities to be carried out and the code of conduct to be followed according to the varṇa system, for example, celibacy, sandhyā, honouring of a guest etc.

C. Voluntary : Vrats undertaken with a specific motive, for example, the sakām vrats.

4.Types of vrats – According to the sense organ

A. Vrats performed at a physical level : Observance of a fast, eating only one meal, practicing non-violence etc.

5.Types of vrats – According to the time

Most vrats fall in the period between Pratipada and Saptamī (7th day in a Hindu lunar fortnight) or Ashtamī (8th day in a Hindu lunar fortnight), because from then on waxing of the moon begins, and the opportunity for fulfillment of the vrat too increases. Depending on when the vrat is performed, the period is divided into the half-year, era, month, fortnight, date as per Hindu lunar almanac, day, the ruling constellation, position of planets (yog), the half-day etc.

B. Paksh-vrat : The Vrats performed in the bright fortnight or dark fortnight are known as ‘Paksh-vrat’, that is, fortnightly vrat.

C. Tithī-vrat : The vrats performed on the fourth, eleventh, Bhānusaptamī, thirteenth day and on the new moon day as per Hindu lunar almanac are known as ‘Tithī-vrat’, that is, vrat for particular tithīs.

D. Var-vrat : The vrats performed on Monday, Tuesday, Friday and Saturday are known as ‘Var-vrat’, that is, vrat for particular days.

6.Types of vrats – According to the Deity

7.Types of vrats – Individual and collective

8.Types of vrats – According to the differences, that is, a man and a woman

A majority of vrats can be celebrated by both men and women. However, some vrats like Harītālika and Vata-savitrī are meant only for women.

9.Types of vrats – According to the varna

Some specific vrats are to be practiced only by the royalty, Kshatriyas (Warriors) or Vaishyas (Businessmen).