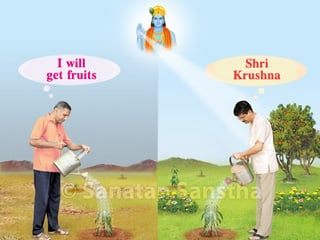 Performing that karma which will result in spiritual growth and, ultimately, God-realization, denotes Karma-yoga. This article explains the characteristics of true karmayogi and individuals who do not deserve Karma-yoga and are fake karmayogi.

1. Never ask an ignorant person to refrain from worldly duties

Meaning : Men of perfect knowledge should not unsettle the mind of people of dull wit and imperfect knowledge, who deluded by the gunas (Components) of Prakruti remain attached to those gunas and actions.

Explanation : An ignorant is generally an individual with 20% spiritual level. Wise men should not ask such individuals to abstain from karmas in Maya (The Great Illusion) that they indulge in; because, preaching Karma-yoga to them is futile.

2. Karma-yoga is for those with supreme spiritual ability

Karma-yoga is for those with supreme spiritual ability. Without this prerequisite, Karma-yoga cannot be practiced.

Meaning : He, who restraining the organs of karma, sits revolving in the mind, thinks regarding objects of sense, he, of deluded understanding, is called a hypocrite.

4. A righteous person who does not

believe in God is, in reality, a so-called karmayogi

Accepting the scriptures that specify what is karma and akarma as an authority and performing karma is in itself Karma-yoga. Activity just for its sake is karma, not Yoga. Even karma performed selflessly without the science mentioned in the scriptures as base is not Karma-yoga. This meaningless loyalty to the Truth is itself a bondage. Activity of noble men who are atheists is mere activity and not karma.

5. The true and fake karmayogi

Nowadays, a lot many are referred to as Karmayogi; but this is incorrect. As the power is in the hands of the unrighteous, anybody is referred to as a karmayogi. Performing karma prescribed by the scriptures with a nishkam (Without expectations) intellect is truly Karma-yoga. What is amusing is that karmas of the so-called famous Karmayogis of the day are contrary to those advised by the scriptures. Such unscientific karmas, due to lack of righteous intellect, can never be performed with a nishkam intellect; for there lies co-existence of insistence and stubbornness. Hence, this karma cannot be performed with an attitude of opposition to none.

Realisation of the soul-form with its characteristic blissful nature is the sole purpose of our human birth. Hence, every Hindu should devote himself to at least one constructive task. Such a task should be acceptable to the Hindu Dharma, that is, it must live up to the expectations of Dharma. A task living up to the expectations of Hindu Dharma amounts to performing karma as defined by the scriptures with a nishkam intellect. This precisely is termed as Karma-yoga.

Those who have not understood the basics of Dharma indulge in social work, instead of working towards God-realization.